With Unfinished:  Thoughts Left Visible on the third and fourth floors of the Met Breuer (previous post, Overview I), the inaugural exhibit on the second floor surveys in over 130 works the career of “Nasreen Mohamedi, an Indian artist, born in Karachi (British India, now Pakistan), who worked in a small format in tones of black, white, grays and taupe, most often using ink and graphite on paper, as well as black and white photography. 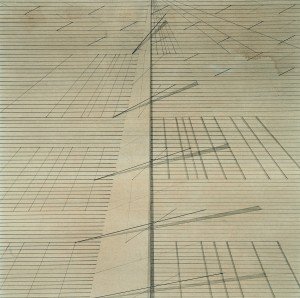 The works seem quiet but they embody struggle.  Often her works are graph paper, as in Untitled, ca. 1975, so that her own marks are purposeful interruptions thrust onto the mechanically ruled.  Many of her own marks are also ruled, but in their own directions.  These works aren’t flashy and yet within them is waged nothing less than the essential human struggle, between mindlessness and purpose, human action imposed on a natural world ruled by mathematical laws of nature.   Her art is a kind of visual philosophy:  in exploring the purposeful assertion of human will, her pictures express, among other ideas, Existentialist thinking in broad circulation particularly during the years of her career. 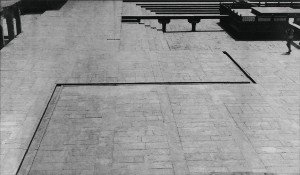 Her camera finds patterns that echo her works in ink and graphite, as in Untitled, ca. 1970) where the grid and its interruptions aren’t drawn but found, and cropped to minimize the sense of representation and stress abstraction. Even in her own handwritten diaries, on exhibit, she creates visual abstractions with dark rectangular ink inlays.

The exterior of the Met Breuer, as seen in the photograph below, shares Mohamedi’s theme:  the granite grid is interrupted – not by the customary rectangular windows, but by trapezoids, accentuated by their heavy frames and irregularly placed. The interior, including Mohamedi’s exhibition space, is similarly grid interrupted, a congruence between Mohamedi’s visual theme and Breuer’s building so apt, I wondered if that was part of the reason her work had been selected for the inaugural exhibition.

And here comes a thrilling experience (especially after 130 small, pale works that began to seem repetitive).  After the quiet of Mohamedi,  one enters a final gallery punctuated with a stunning, large, deep-framed trapezoid window, with natural light pouring in and a blue sky. 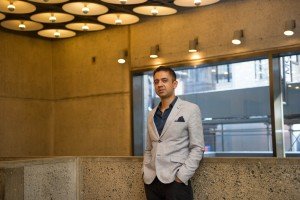 Relation rounds out this inaugural Met Breuer experience, performances of music and video — a delightful dimension of continuous movement and sound — in a gallery off to the side on the lobby level.  I came in while Vijay Iyer on the piano and Mark Turner on the saxophone were playing contemplative, exotic and sensuous contemporary jazz.  Relation: a Performance Residency by Vijay Iyer, succeeds in creating intimate connections between the performers and the audience:  you sit at ease within touching distance of the performers, surrounded by their lush and continuously surprising music.

I happened in also on one of the events between live performncs,  Radhe Radhe:  Rites of Holi by Prashant Bhargava, with music by Vijay Iyer, a film too dependent on loving close-ups of the face of iconic heavily made-up Indian woman, alternating with kaleidoscopic, obvious shots of masses of Indians worshiping frenetically — a slip-up in quality but then, nothing’s ever perfect, and this inauguration of the Met Breuer otherwise comes close!

Different performers will be playing throughout March, and I’m sure the lobby gallery of the Met Breuer will always enjoy an animating art form.  It’s so refreshing!

The inauguration of the Met Breuer covers all the bases but in a free-form way.  There’s modern art and breadth through time, geographical, ethnic and racial diversity, and men and women artists represented.  There’s focus on a single artist, Mohamedi, and a truly magnificent survey ranging from the Renaissance to contemporary art in Unfinished: Thoughts Left Visible, and there’s music and film, all founded on outstanding scholarship, as the met brings Marcel Breuer’s great building to new life.

The inclusion of so many forms of art from past to present including music by people from around the world is an accomplishment for the curators to be proud of.