Here is an opportunity to see some of the most remarkable objects of art and archaeology excavated in China.  Because some are so lavish, and in some cases unique, a number have been featured in Western publications including newspapers and magazines, but most have never been seen outside of China.The Qin and Han dynasties together make up the classical period of Chinese art and culture, when the basic forms of political organization and intellectual and artistic paradigms were formed.   The key theme of this period, and of this exhibition, is unification of the vast territory of China under the powerful Qin emperor, Qinshihuang, and its maintenance and expansion in the Han dynasty. 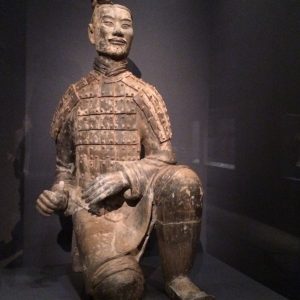 It takes a powerful army to unify a large and disparate territory.  When Qinshihuang died, he took with him to his tomb an army of life-size terracotta warriors, over 700 archers, cavalry, infantry and officers, all in full armor made of stone (representing the iron armor used by the emperor’s army), buried with him in the emperor’s mausoleum. In the first exhibition gallery, you’ll find several of the emperor’s army including the archer (right).  Crossbows are difficult to draw — the archer had to shoot from a kneeling, rather than a standing, position.  A modern replica of crossbow such as he would have held is near by. Through this elaborate terracotta army, we glimpse the emperor’s thoughts:  he made sure he had in his mausoleum everything he needed and most enjoyed in life:  the army was high priority.   Images standing in for live people and animals certainly improve on human and animal sacrifice (a cultural practice replaced by including replicas in tombs here and elsewhere in the world of powerful leaders).  In creating the terracotta army, molds were used, in different arrangements, to compose the bodies of the warriors but the faces were created with life-like individuality. 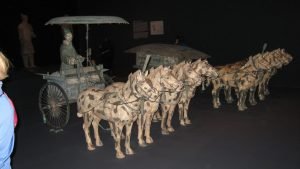 Qinshihuang also made sure to have his chariots with him in the afterlife. In the first gallery, along with the warriors, are bronze chariots complete with braces of well-matched horses – though these in the exhibit are detailed modern replicas created half the size of actual chariot groups found in the emperor’s tomb. The chariot seen replicated here (left) was probably used in battle or on the emperor’s inspection tours.  The emperor probably sat and perhaps slept in the other one with a covered enclosure while touring of the territory he had unified: and at his death that chariot likely carried his body to his tomb. 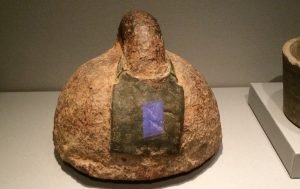 Since political and economic unification go hand-in-hand, the standardized iron weight, also from the emperor’s tomb is as dramatic a demonstration of the determination to enforce imperial unification as military might. This exceptionally large weight weighs “1 shi,” translated as one “stone,” nearly 70 pounds. Significantly, the inscription dates it to 221 B.C., the year Qinshihuang, having completed his vast project of unification, assumed the title of “Emperor,” and it was so important the Emperor made sure this, and other standardized measures, were in his tomb (he died in 210 B.C. and his tomb was complete by 206 B.C.). 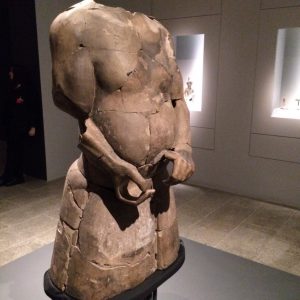 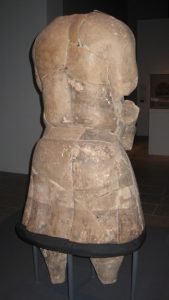 Strongman, view from the back.

Found in a pit linked with Qin Shi Huang’s tomb is a lifelike terracotta sculpture of a “strong man,” excavated with ten other figures that evidently represent a troupe of acrobats.  They would have performed for the amusement of the Emperor and his court, and through replicas were on hand for him after death.  Strongman, and another like him once held steady a pole for another acrobat performing gymnastics at the top of it.  The fleshy realism of his body, with the fatty rolls pushed up by the waistband (above left) , is unusual to Chinese art and the suggestion is made that it may represent some influence from Hellenistic art, notable for realistic depictions.  On the other hand, it may serve to witness the careful eye of the Chinese sculptor impressed by the formidable anatomy. 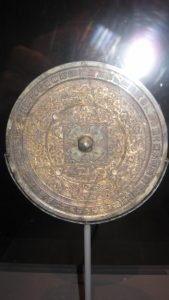 that succeeded the Qin expanded China’s borders, developed the archetypal Chinese bureaucracy, and consolidated and maintained the political centralization of the Qin.   These themes are expressed in a portion of the inscription on the elaborately designed back bronze mirror of the Han period:  “May the Central Kingdom [China] be peaceful and secure, and prosper for generations and generations to come by following the great law that governs all.” 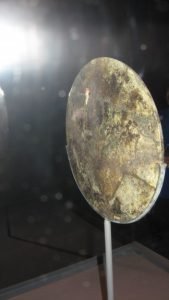 Although today the once-polished surface of the mirror’s face no longer reflects images, the inscription also bears this comforting thought:  “When you see your face in the mirror, it dispels all harms and woes.”  (I take it that was on a “good hair day.”)

Another object (not illustrated) gives a glimpse of the Chinese reverence for elders, a wood and bronze walking staff, with the image of a partridge on top, found with inscribed wood slips stating the special privileges the emperor accorded to elders.  If you were over 70, this staff would enable you to enter government offices freely and not only that — you could walk on the side of the road otherwise reserved for the emperor.  Great value would have been placed on keeping the emperor’s ceremonial side of the road clear so evidently there weren’t a lot of people over 70 in China 2,000 years ago – today the emperor’s side of the road would be crowded! But embedded in the wooden staff is an attitude:  respect for elders, a tangible reminder of the value placed on respect for elders that to this day reverberates in China. 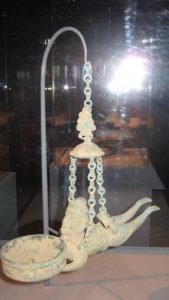 Hanging Lamp, figure with “Foreigner’s” features, Eastern Han dynasty (25-220 A.D.), Bronze, H 10 7/8 in. (27.6 cm), Lent by Hunan Provincial Museum. An attitude toward foreigners as inferior may be expressed in the figure in this lamp.

Works of art can surprise you by revealing attitudes you might not expect to find in them.  This lamp is an example.  The figure holding the bowl of the lamp has non-Chinese facial features: deep eye sockets and a notably large, high-bridged and outwardly curved nose (apologies that these features are not seen more clearly in the photo).  He also has curly hair. Like these physical features, this type of lamp with a chain also points beyond China.  This is a unique example of a chained lamp found in China but, on the other hand, chained lamps were common in the Greco-Roman world. In the Greco-Roman lamps, the human figures often have face and body features describing inferiors as they are held to be in that culture.  they are servants or a slaves and — and  there’s a joke here — within the artistry of the lamp, they are shown doing what servants do all the time: they ‘re carrying things for other people:  the weight of the lamp. In parallel, the big-nosed foreigner bearing the weight of this Han period Chinese lamp likely expresses a cultural attitude that sees foreigners as “inferiors” — not proved, that’s my hypothesis.

The figure’s hollow body held the lamp’s oil which flowed from a small hole in his chest into the round bowl. 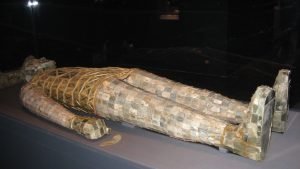 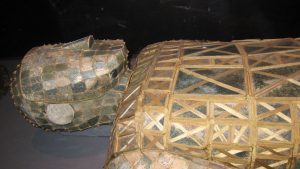 Among the many ways the art found in the tombs – here and throughout the world — expresses the desire to live forever, Dou Wan’s jade burial suit is among the rarest. The hand wrought jade plaques, held together with gold wire and following the shape of her body, along with other jade plugs and disks, conferred immortality.  The burial outfit included a gilded bronze pillow.  Gold, used with jade in this burial, is precious for its rarity and brightness and also because, since it doesn’t tarnish, it “lasts forever”:  thus it’s a symbol, and sometimes a guarantor, of immortality.  This burial suit is unique and so valuable I am surprised it was allowed to travel outside of China.

With 160 objects, this is quite a large exhibition that drives home two themes:  politically, the unification of China and, in terms of human hopes and fears, the desperate desire for immortality.  In some ways, it’s an old-fashioned kind of exhibition, focused on articles from lavish tombs and the elite class.  Perhaps to preserve some fugitive colors still present on some of these ancient works, such as the terracotta warriors, the lighting of the exhibition is low which does not bring out the inherent drama and beauty of some of the works of art.  Still, this is an exhibition not to be missed.  Many of the works are from provincial museums and museums far from the largest cities so that even if you lived in China, you might never see them all, and to see them here is a once-in-a-lifetime opportunity.  There are many surprises and much to learn about the art and history of China’s formative classical dynasties which shaped the forms, institutions and values that are in many ways alive today. 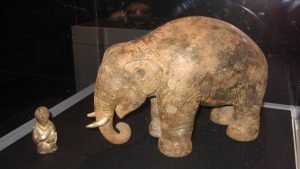 Elephant and Groom, Western Han dynasty, 2nd century B.C., gilded and silvered bronze, Elephant H. 7 7/8 in. (20 cm), Groom H. 2 13/16 in. (7.2 cm), Lent by Nanjing Museum.  Elephants were no longer present in this part of China (hunted out, climate change) so this group, from a prince’s tomb, represents a fascination with exotic animals.

Age of Empires:  Chinese Art of the Qin and Han Dynasties (221 B.C.-A.D.220) will be at the Metropolitan Museum of Art from April 3rd through July 16, 2017.  For more information about the exhibition and visiting the museum, click here.

The objects are of tremendous interest and tell the story of how China became China and allow us, the pubic, to gain an appreciation of this great civilization which has now become a world force. To understand is to know – thank you MMA!