In a conference room of a management consultant firm, a team has just sped home from work in Greece to take up the firm’s new fast-tracked project which turns out to be:   how do you liquidate a couple of million people without anyone noticing?  The purpose is to stop a deadly virus from decimating the entire human race. 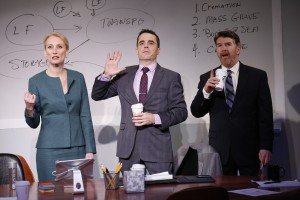 As they ideate — that’s new-speak for brainstorming by professional problem solvers – the project’s horrific difficulties emerge.  What’s the most efficient way to kill that many people?  How do you keep it secret to allay panic and how do you make all those bodies disappear?   The team comes up with imperfect and inevitably gruesome solutions.  But, contemplating the grotesque, balking emotionally at the disgusting details of the tactics they dutifully develop, they’re driven to ask, what’s gotten us into this?  Why on earth are we doing this?

Good questions:  are we facilitating mass murder, they begin to wonder — which is, after all, what it looks like?  Terrorism?  Or are we doing good?

Is the save humankind story a lie to keep us on project?  Or true? 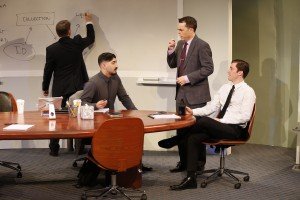 And then the startling thought:  Is the boss telling us the truth, or deceiving us to protect a lucrative contract?  Or does the boss himself even know the truth?

In the short time they have to come up with the preliminary plan, personal and ethical concerns collide with the project which, however, they keep working at – their jobs are at stake.  How do we kill all those people?  Do my colleagues know more than me?  Why’d my lover go out for coffee?  How do we get rid of the bodies?  How do we know the truth?

Ideation is fast-paced, entertaining and witty as it bounces around its profound subject, how do we know anything for sure?  How can we trust anybody?

The characters reflect stereotypes in a humorous way but are individually drawn and distinct, fast talking but fully motivated.

Carrie Paff as Hannah is crisp and in-charge as the executive riding herd on the bright guys of the consultant team.  She moves around the stage with special ease, unifying the set and the play.  Mark Anderson Phillips is hilarious as Brock, the dour, ironic member of the team.  Michael Pay Wisely as Ted, more immune than the others to the philosophical issues of “how do you know,” is steadfast in his focus on the job.  Jason Kapoor as the Indian engineer Sandeep is thoughtful, weighty.  Ben Euphrat as Scooter is humorously brash as the young kid with a father on the Board. 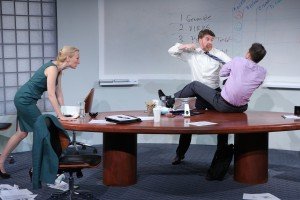 These are smart people who see the humor as well as the invitation to disaster in their preposterous dilemmas, making for an enjoyable and thought-provoking play.

The play is in its way a strong pill with a sugar coating. The playwright and the actors present several of the most serious philosophical and moral issues, ethics and what is truth, in the form of opera buffa. This is carried out skillfully and you do not realize what the message is until you have absorbed it. Quite an accomplishment.