The opening of the Metropolitan Museum of Art’s new space is a wonderful event. The Met has done this just right! 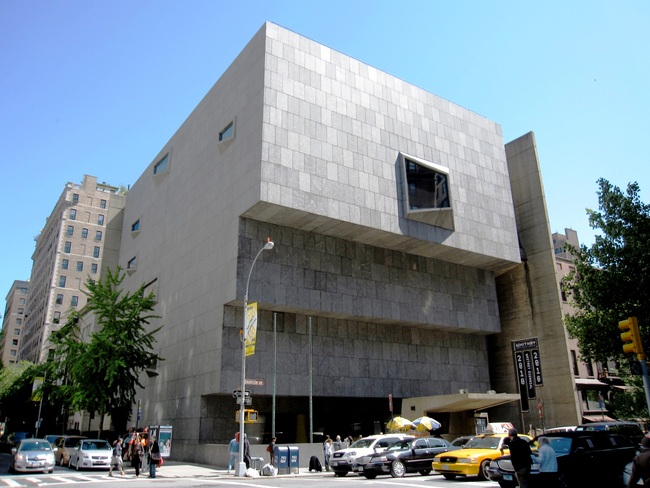 OVERVIEW I  looks at the building by Marcel Breuer, and the inaugural exhibition, Unfinished: Thoughts Left Visible.

The great modernist building designed by Marcel Breuer used to house the Whitney Museum of American Art but the Whitney left the Breuer building, on Madison Avenue and 75th Street, and moved to a new building downtown.  Now the Metropolitan Museum of Art has taken over the Breuer building to create its own new museum space for modern and contemporary art — and as far as I can see, they’ve done everything with great intelligence and dedication – and created a great contribution to cultural life.

First of all, they chose as a home for modern and contemporary art this controversial work of modernist architecture that expresses the process driven and assertive character of the art that will be exhibited in it.  Like David, the relatively small Breuer building challenges the Goliath of New York City sky scrapers by being their opposite:  it’s top heavy in contrast to the mandated, upward diminution of the sky scrapers and is inward looking in contrast to their glassy transparencies.  Frankly and aggressively weighty with granite and concrete slabs, Marcel Breuer’s building turns its back on the illusion of soaring in favor of truth — to materials and to gravity.

Unfinished: Thoughts Left Visible is an exhibition of over 190 works of sculpture and painting from the Renaissance through contemporary art, each of in one way or another, of for one reason or another, unfinished or thought to be so – you can’t always be sure.  Unfinished works by their nature offer glimpses into the artist’s process and thus into his thoughts – hence the title.  And, as the overwhelming impact of this exhibit makes clear, they are no less beautiful or moving than works clearly brought to a finish.  Some prefer them, the way sketches may be preferred, as an intimate glimpse into the artist’s mind that can be covered over by artistic polish.

There are many reasons – all represented in this exhibition – of why a work of art comes to us highly finished in one part and less finished looking – more sketchy, or roughed out — in others.    The artist, or someone else key to the work of art (patron, portrait subject) may have died or had a change of heart about the work.  Or, with Rembrandt who spoke about this, the artist just may know from the bottom of his artistic soul that a work is finished though the work may appear to others as unfinished.  Or the artist may have a psychological reluctance to finish, as is speculated with regard to Leonardo. 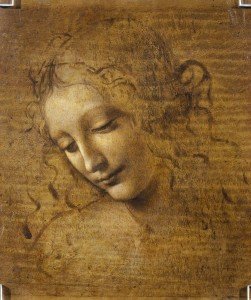 But always in play, I believe, is the artist’s sense that the contrast between degrees of finish express profound meaning:  the contrast between the tangible and intangible, the tension between spirit and matter, and – for me, most powerfully, a visualization of coming into being.

In Leonardo da Vinci’s Head and Shoulders of a Woman, the face of the woman is brought to a high level of detail and finish.  Her face looks three-dimensional, even sculptural, tangible, “real,” in comparison with the diffuse drawing of the hair and shoulders.  One may understand, in this ambiguous contrast, an expression of conscious awareness against a background of diffuse thoughts and feelings. Or, more bodily:  just what it feels like to be a human being with a solid outside and flowing, tangled inner life.  Or in the dialog between artist and viewer, the contrast may provoke thoughts in other directions. 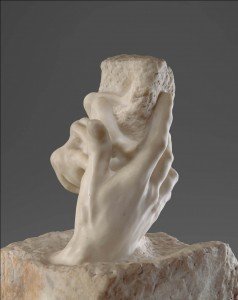 In The Hand of God, Rodin’s intention to convey creation through a contrast between the finished and unfinished is unambiguous.  In the artist’s brilliant conception, and inspired by Michelangelo, form emerges from the unformed in God’s right hand.  That hand, detailed, shaped, and functioning, itself emerges from rough stone, and holds the primal clod of earth — roughed stone — from which Adam and Eve, bodily but not yet aware — emerge.  Rodin sculpted his own hand for this work, a testament to the artist’s identification with God the creator.  Thus – like Michelangelo who inspired him — through the purposeful contrast between the formed and unformed Rodin expresses coming into being on all levels, physical, intellectual, emotional, spiritual and artistic.

And Michelangelo and Rembrandt are in this exhibition, along with works from Titian to Pollock, van Eyck to Rauschenberg – work in turn inspired by The Hand Of God and yet another great Rodin and …..

But now I move on to OVERVIEW II which looks at the other inaugural exhibitions and some thoughts on the Metropolitan Museum’s choices in inaugurating the MET BREUER.

The MET BREUER and its inaugural exhibitions open officially March 18, 2016.  For more information about the museum, the exhibitions, and visiting the MET BREUER, click here.

I never realized why I liked the building so much – now I do — thanks.