It’s a great idea — as composer and lyricist Stephen Schwartz — of Godspell and Wicked —  thought when he first brought Working to the stage not long after the publication of Terkel’s book.  Revised and performed through the years, in its current version it’s an engaging and at times moving series of fine musical numbers (though I wish there were no rhymes, see below), beautifully performed by a cast of six who, all in all, take the parts of twenty-six characters and sing in the ensemble. 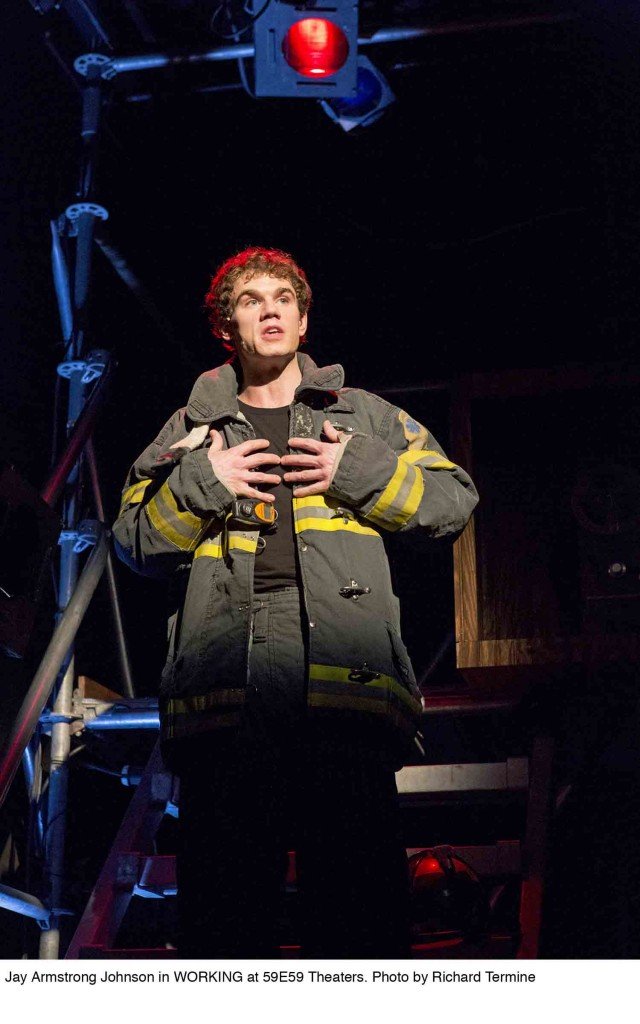 With the words taking the lead, as they should here, and with some excellent music by leading professional composers, we catch the poetry, the accuracy and the deep feelings behind what people said to Terkel:  a fireman (L), a felt dyer in a luggage factory (what a hard, messy, grinding job that is) , an interstate trucker, a cleaning lady, a housewife and others — now singing what they like and don’t like, and what meanings they find and don’t find — in their workaday work.  All except for Joe, retired, who has that to tell us about.  The performers segue in and out of their sung vignettes on the lower part of the handsomely designed stage as a fine foursome of musicians play behind a scrim above. 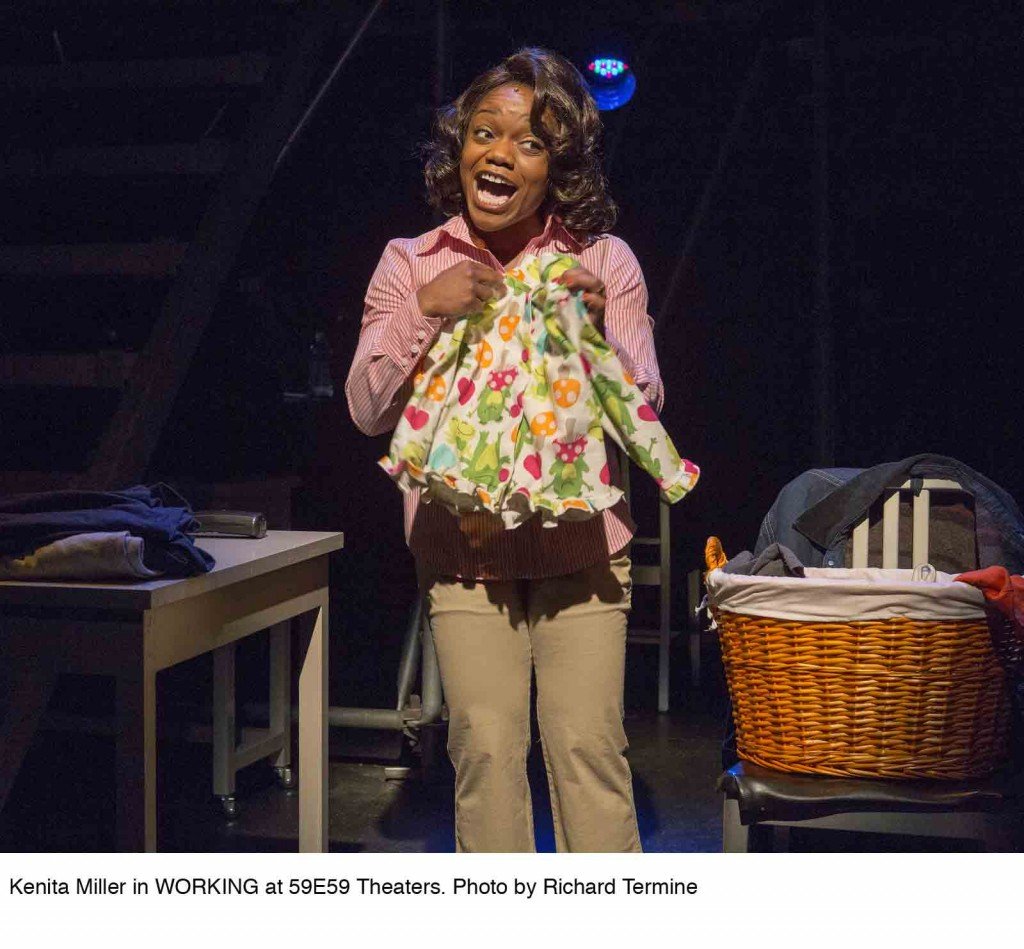 Work has ground down some of the workers:  through Marie-France Arcilla’s singing of the assembly line dyer of felt pads, I felt empathy with her, caught in a messy, exhausting trap.  Some workers are weary but Maggie Holmes (R), singing the cleaning lady, let me share her hope that there will be a better life for her daughter — to be addressed by her last name (I wondered how that daughter’s doing, 38 years later).  Jay Armstrong Johnson as the mason conveys an inspiring pride:  stone lasts, and leaves you “Something To Point To,” the title of the last — uplifting — song in the show. 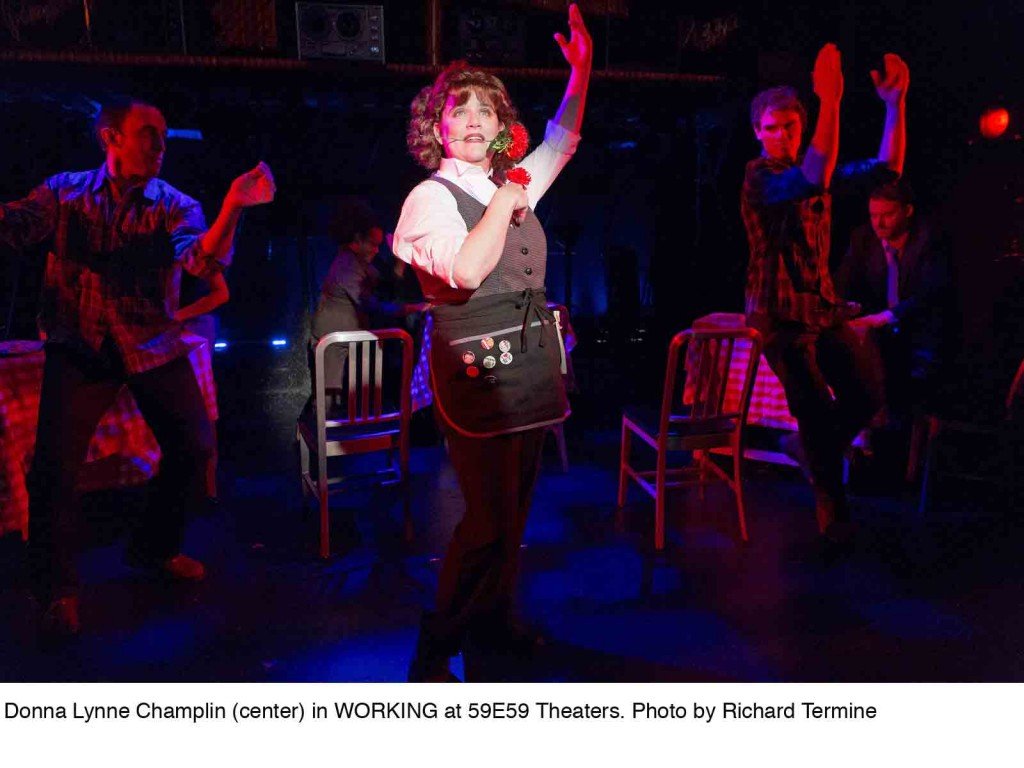 On the other hand, Joe Cassidy, as the publicists who made more money than most, conveys the emptiness of not having anything to point to after years of work (maybe; it’s ambiguous).  Nehal Joshi (below L) gives an hilarious edge to the ex-newsroom assistant who makes plain to the audience what he himself can’t see, that is, why he can’t keep a job: in all his parts he touches the heart with his blend of sadness and wry humor.   Saving the best for last (my best but my friends had other favorites):  the performance of Donna Lynne Champlin (R) as the gutsy waitress proclaiming of her job, “It’s an Art;”  it’s memorable — a first rate musical theater moment.  (I looked after seeing the show and sure enough, that was one of the few songs written by Stephen Schwartz himself.) 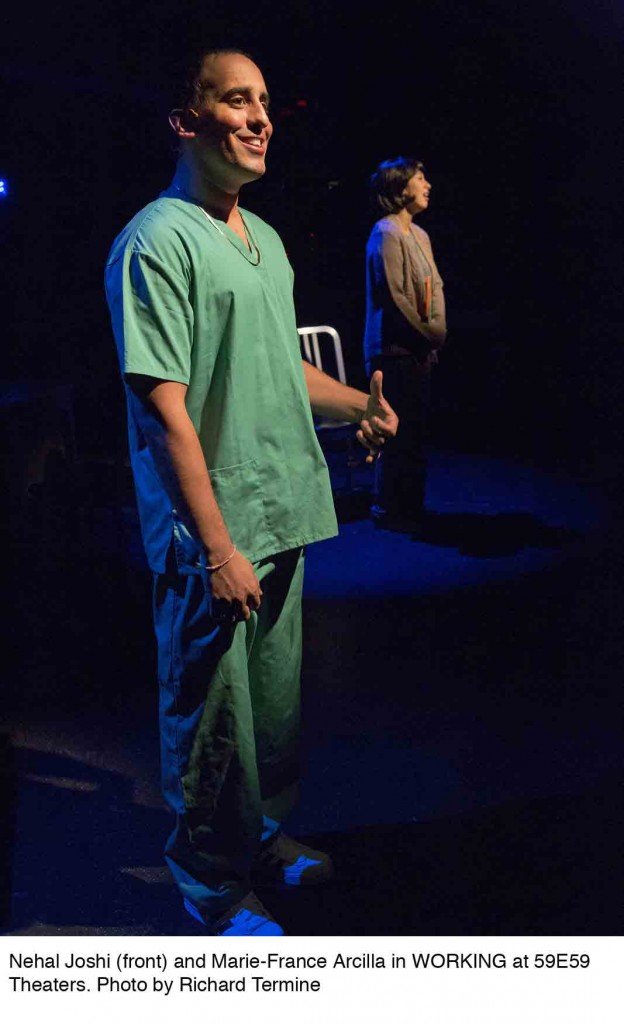 Two things troubled me about this production, the microphones, and the rhymes.

These six performers are all fine singers and actors:  why oh why were they miked???  There’s no need for it — as professionals, they know how to make themselves heard.  (And the show is in a rather small theater.)  The microphones the performers wear diminish the sense of immediacy that draws one to “live theater:”

I found that the rhymes in the songs, though often clever, undercut the authenticity that Working depends on.  The strength of the show lies in our awareness that we’re hearing the very words spoken by real people from different walks of life — and real people don’t (at least not very often!) talk in rhymes.  Without that sense of the genuine, this already loosely jointed musical thins out toward a series of show songs. 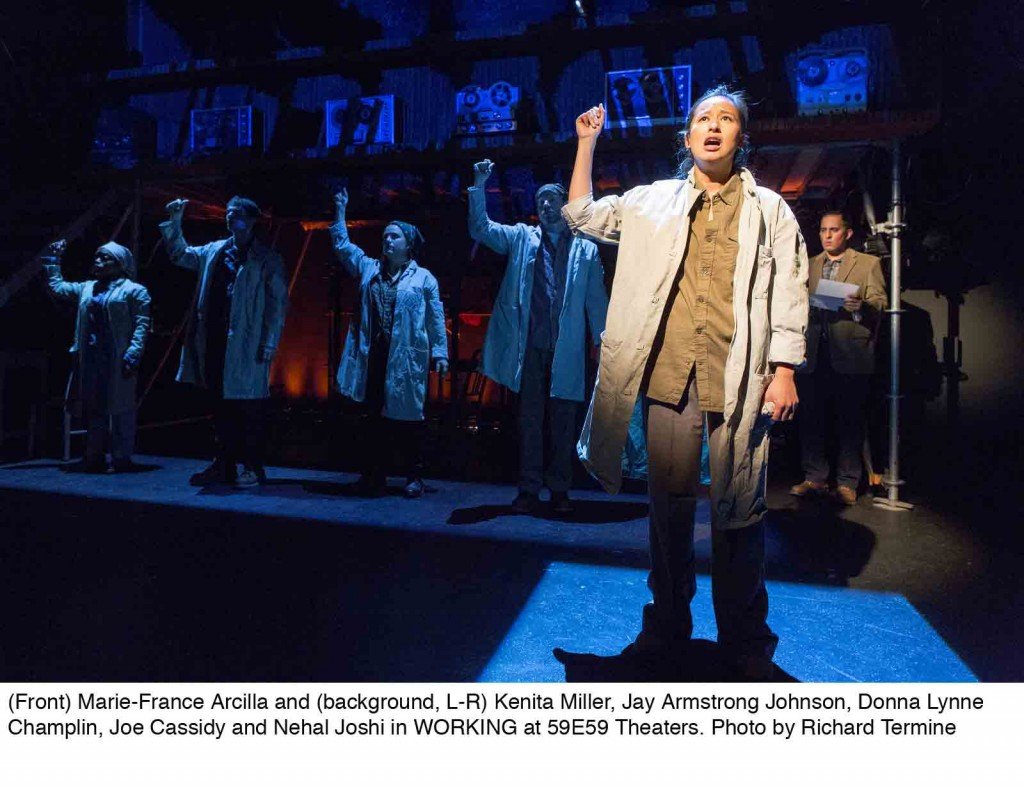 Though it doesn’t quite gel as the unified musical the creators intend, Working is highly entertaining and satisfying, like an exceptionally varied and unusually thought provoking evening of cabaret. 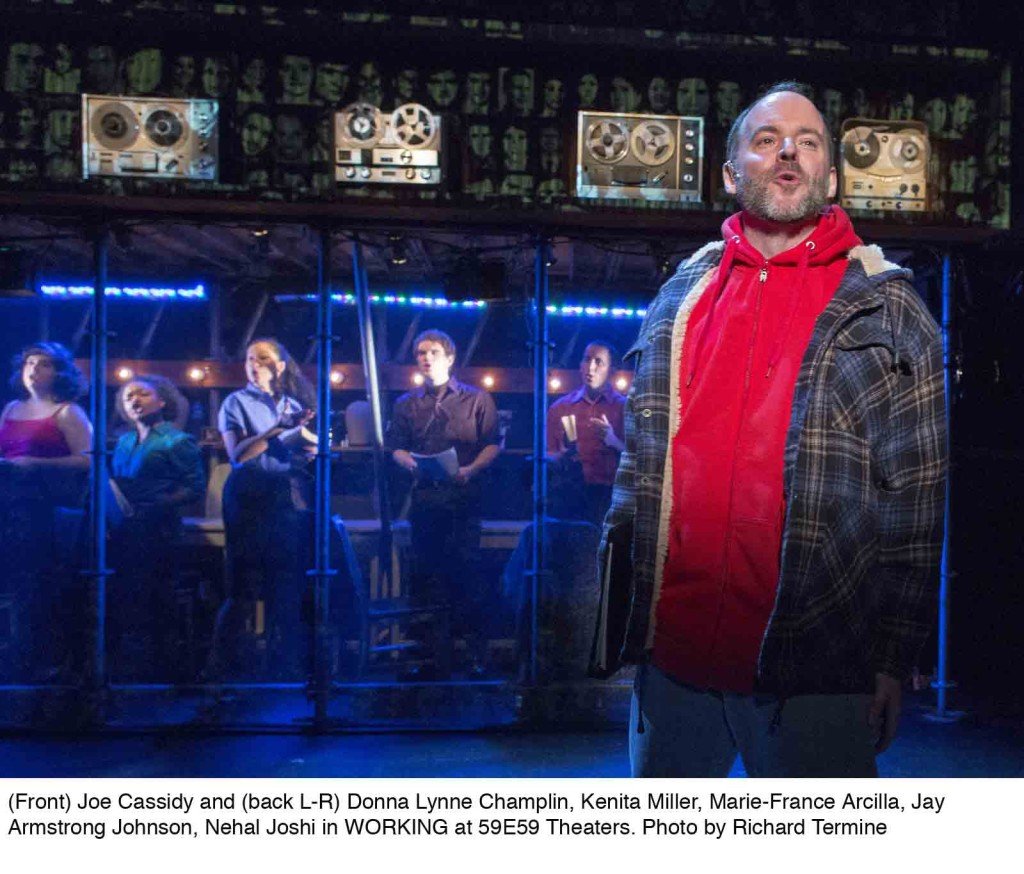 Working plays in midtown Manhattan at 59E59 theaters through December 30, 2012.

Thanks for the nice feedback — it makes me feel good! Yvonne

Thank you for this very good review. I agree with you about the use of the microphone – I have a hearing problem and it was so loud I had a take my hearing aids out because the sound hurt! However that being said, it was an interesting and pleasant and modestly memorable evening – mostly the people portrayed had good stories and was well acted. This production was somewhat in the tradition of Whitman’s I hear America singing!