Magic unfolds in the relatively small performing space of the Flea Theater flanked by a few rows of audience seats.  That central space comes alive with color, wit, music, dance, energy.  In fact the energy spills from the stage throughout the theater — at the entrance actors costumed in the flounce and style of the 17th Century greet you with drinks and mill everywhere to talk with you, get to know you in the way of director Iskandar’s immersive theater — seen last season in the Flea’s masterful production of These Seven Sicknesses.

This ebullient cast, drawn from The Flea’s resident company of young actors, will even tell you — if you ask — that “restoration comedy” refers to the plays produced in England in the late 17th Century, notably rakish in reaction to banning of theaters and anything that smacked of abundant pleasure under the Puritans.  True to its tradition, Restoration Comedy is filled with alliances, dalliances, gender bending, word play innuendo, and a dose of plain old polymorphous sexuality.

Couples entwine, bottoms are bared (this might not be one for the children), the play lets loose.  Snooping through a telescope on her husband making love to another woman, Amanda wonders if this current passion of his is “double jointed.”  But for all its advocacy of anything goes, this is not in your face aggressive like Hair  — there’s a delicacy to it, just as there is to the extraordinarily lovely colors that fill the stage, the creative choreography, and the marvelous music that’s everywhere.   It’s real subject — joy of life .

In keeping with a play that questions whether everyone should be held to marital fidelity or if it’s too much a one-fits-all straightjacket, the plot’s starting point is the marriage of a pure and virtuous woman, Amanda, and John Loveless, a libertine seeker of sexual variety.  Joined in holy matrimony — but can they possibly be right for one another?  The play seeks to find out via a positive maze of ins and outs and wildly funny characters and situations.  To help save his friend’s marriage (and putting aside, of course, the fact that he’s madly in love with her), Loveless’s best friend, Worthy, sets about teaching Amanda the art of sensual variety:  she turns out to be an enthused pupil! 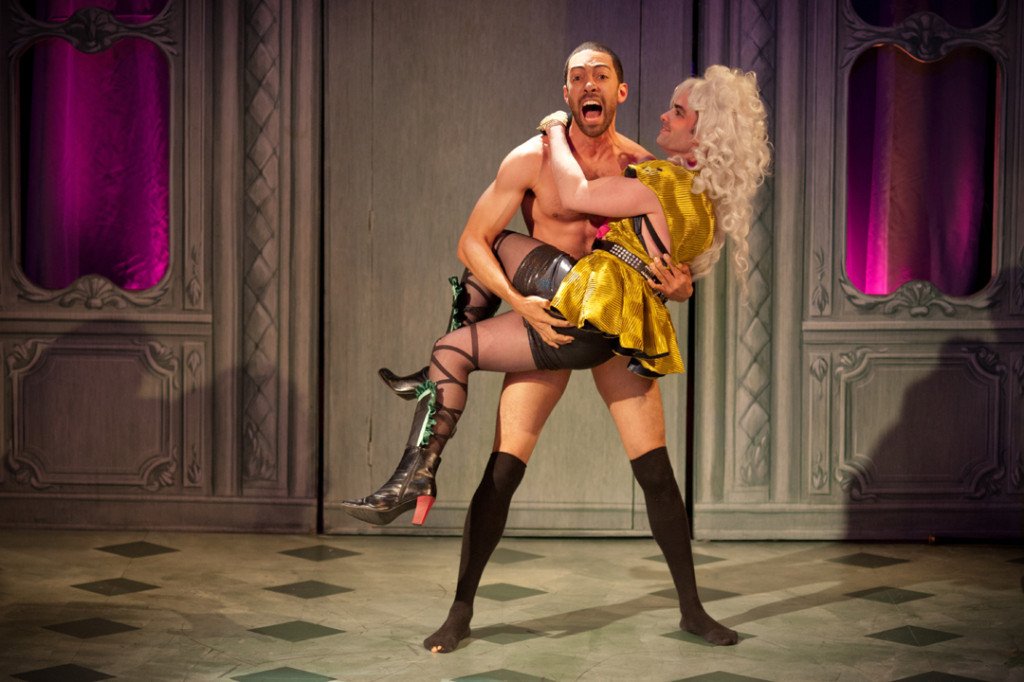 So much happens in the play — and in the intermission which is fairly wild with singing by talented cast members, dancing, and drinks and hors d’oeuvres for all — that the play needs strong and individualized performances from the main characters to hold the narrative line.  James Fouhey dominates wonderfully as Loveless — wry, amused, exotic, bemused, leaping across the stage with his long body.  Allison Buck is charming and amusing as Amanda in both her personae — holding firm and giving in as the apt pupil of the amorous Worthy, played with a kind of sophisticated understatement by Seth Moore.  Stephen Stout is a real show stopper as the outrageous alluring sensualist, Foppington.  His accent, sounding the way the old typography looks, is worth seeing the play for in and of itself.  Thank you, Stephen Stout, for so many deep laughs!  But everyone is no less than perfect in their many parts.

In fact everybody who has had anything to do with this play does what he or she does superbly.  There’s an entire troupe of first rate dancers, with fresh and imaginative choreography by Will Taylor — not the kind of group shuffling around the stage that sometimes goes by the name of “choreography.”  In designing the costumes, Loren Shaw found a way to make them both amusing and beautiful:  I understand they’re all hand sewn, one more gauge of the sheer quality that’s sewn into every inch of this production.  I’d like to mention everybody but this is one ambitious project:  I count a cast of 40 (the NY Times critic was impressed recently because Golden Boy on Broadway has a cast of 20).  Hah!  Eat your heart out Broadway:  Off- and Off-off Broadway are where it’s at!

There’s an infectious idealism at the Flea — as if everybody is feeling “isn’t it wonderful what we’re doing!”  And it is.  Why anybody who wants to go to the theater would go to anything but Restoration Comedy is beyond me — unless, of course, you don’t feel like laughing.

Restoration Comedy  plays at The Flea Theater on White Street in NYC’s Tribeca through December 30, 2012. 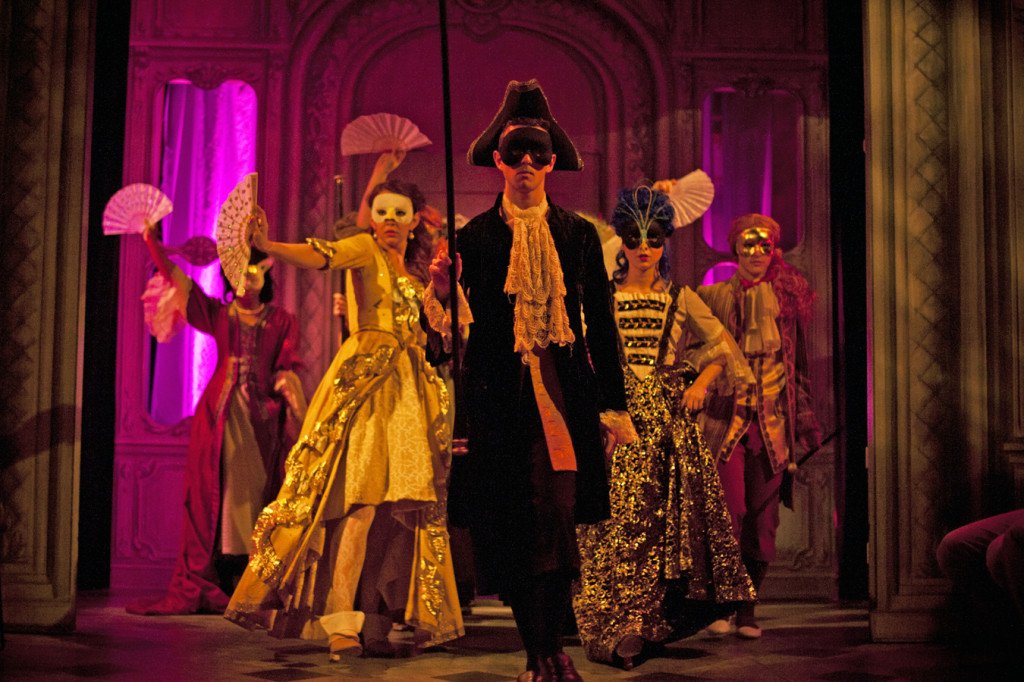 I like the way you put that — “if you want your life to be complete” see it — that’s true. Thanks for writing, Yvonne

What more can one say – this was really one of the great and most enjoyable evenings of theater that I have ever experienced, and I suspect this will be true of most others. As you said, it celebrates the joy of life and persists every time I think of it again. Really – if you want your life to be complete go see Restoration Comedy at the Flea.