I really don’t know why anybody thought this play was worth producing.  It’s a shipboard farce, a sendup of ship narrative cliches presented with something like frolicksome good humor in a way intended to bring out the ridiculous.

Felix, wearing a dark shirt and khakis, looking for adventure, pushes himself on board as a member of the crew of a cod fishing  boat, The Diligence, where he does things wrong and annoys the captain and everybody else.  Then somebody else named Felix, wearing the same outfit, joins up, as does another Felix who turns out to be Felicia, i.e., a girl, but not until there’s been time for mistaken identities about boys and girls and which Felix did what, etc.

The motley crew sets off.  The first Felix, the main character and very well performed by Menj Mirman, is a comic type of gung ho optimist who misses the point a lot and is given to moments of hyper-imagination.  He meets up with some sea creatures who swim along the boat including a mermaid (play on actor’s name?) 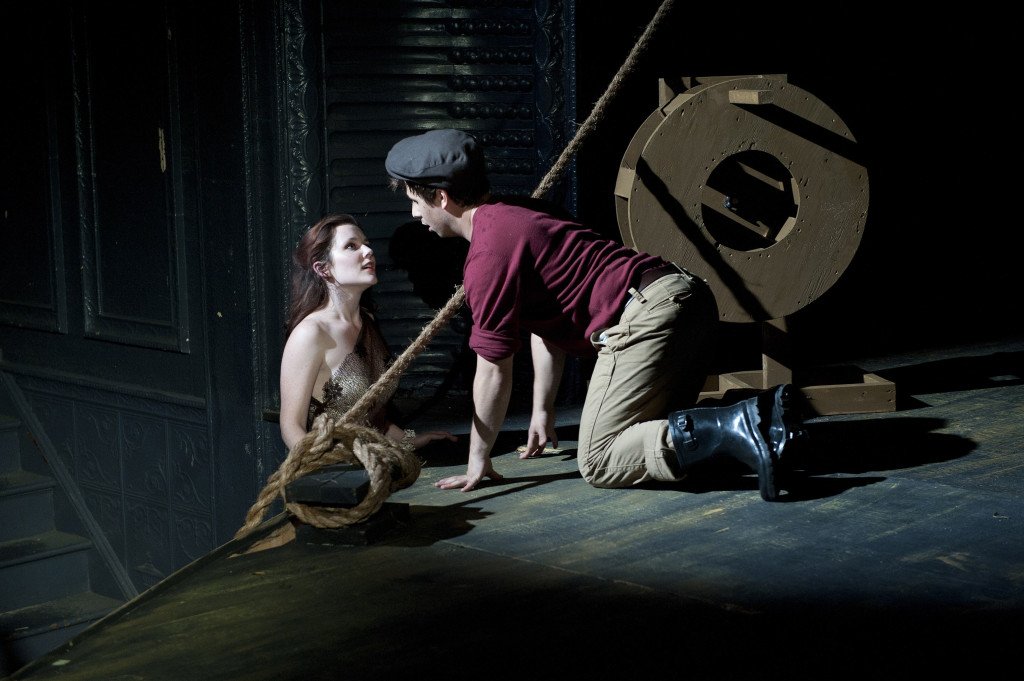 with whom he instantly falls in love, and these are not of his imagination though he has a hard time persuading others about them.  Everyone on board is an exaggeration of some type or other, including the martinet Captain who gives a Scottish tar 20 lashes for some peccadillo.

As a Master of Ceremonies, a blind old fisherman is played by a very heavy set, sighted young woman with a very loud, grating voice and who, clown-like, makes her own body a source of laughter, an offensive tack.  Long ago the Captain, a research chemist at the time, loved Amelia Earhart, as it turns out when she turns up in tattered 1930’s air woman’s attire, jodphurs and boots, etc. (the ship veers near a desert isle).  The action reaches its crescendo when a Nazi ship approaches, the play being set during World War II, and two of The Diligence crew turn out to be Nazis: the mishap-ridden Felix fences with the one named Fritz, well played by Willy Appelman, and in spite of Fritz’ rapier, Felix vanquishes him with a broomstick.

The set by Andy Yanni, with the wood prow of the ship jutting into the audience’s space, is appealing.

Does this play have a purpose?  I tried but couldn’t figure any out.

The Pipeline Theatre produced one of the best off- and off-off Broadway productions of last season, Brecht’s The Caucasian Chalk Circle, reviewed here, which led me to search hard to understand something worthwhile in this production.  Was I missing something? I asked myself.  The ridiculous can have great value, as in Dada performances, but there’s no hint of the ethical and political intensity which illumines Dada.  Maybe this is some sort of brilliant deconstruction.  Well, why on earth do ship narratives need deconstruction?  Perhaps it’s a critique of  Gilbert and Sullivan?  They really need one in 2011.  Even to call Felix & The Diligence “absurd” gives the play too much philosophical weight.  So I’m left to think that Felix & The Diligence is a performance that, like a school skit, is more fun for those in on its making than those watching it.

If I’ve missed a point, I hope someone will write in and let me know.  Meanwhile, I’ll be waiting for Pipeline Theatre to return to the excellence it displayed in its last major production.

Felix & The Diligence plays at the Connelly Theater in Manhattan’s East Village through October 8.

No you have not missed the point! It is hard for me to reconcile that this was the same group that did such a magnificent job with The Caucasian Chalk Circle and presented this from the contents and acting as a performance which can only be characterized by the term – mediocrity. This would not even make the grade as a high school skit. The directing as well had serious problems – one resented being yelled at for a large part of the evening. I do hope that this company will regain its talent and do something again equal to… Read more »