Raft of the Medusa is powerful, intensely human, and totally real — you are there.

Like Gericault’s epic shipwreck painting, The Raft of the Medusa of 1819 (see it below left), this play is based on a dire situation with many deaths and few survivors — only instead of shipwreck victims, these are victims of a mortal disease, brought together in 1988 not on a survival raft but — same thing — in a group therapy session for those infected with the AIDS virus.  Seeing the play you know this is what it was like:  beyond belief grim, and yet — in the way its draws out the best in people, there’s a gleam of light, a breath of hope, as in the painting.   It’s a rich, brilliant and beautifully written play, acted to perfection.

At the start of the play, the youthful Donald dies agonizingly in the arms of his lover, Michael, in a stunning, male pieta (compare the old man and young boy in the left foreground of the painting).  The scene moves to a realistic group therapy session — sparse office, metal chairs — with its big city racial and ethnic admixture, from affluent and successful to homeless and out-of-work, drawn together by a common denominator, AIDS. 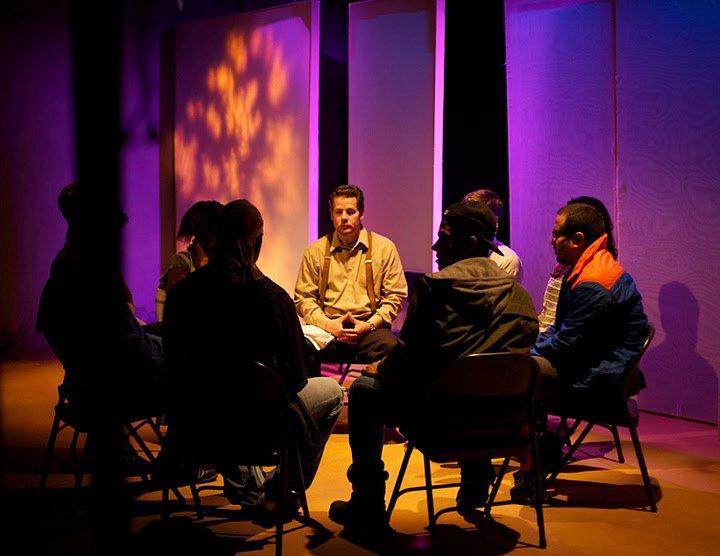 A beautiful White gay model, Tommy, can’t get a job since he’s gotten so thin.  There’s Alan, an enraged Hispanic with Karposi’s Sarcoma dotting his face like marks of Cain.  Men and women, young and old, they got it all the ways you can.  Doug, a Black drug dealer who seems straight, got it shooting up in jail.  Some of them tell their stories — prompted or not by the psychiatrist, Jerry.  Cora, a slick looking professional woman, distances herself from the gay men but eventually blurts it all out.  Donald who has died his painful death mysteriously moves in and out — a Christ figure, which is why the point that he is Jewish is emphasized (he wanted to be a Rabbi, a teacher):  he hovers, in every way a Holy Ghost.

The group session lurches through quieter periods of “sharing” through to volatile bursts, fueled by the unbearable tension of near and certain death.

The action is heightened by the arrival of newcomers, a high school girl who got it from her boyfriend (his family has moved to California to avoid her suing them) and a well known tv and movie actor.  Their arrivals clarify underlying situations and catalyze the revelation of explosive truths about themselves and others. In the original event that the painting describes, there was cannibalism among those set adrift on the raft with almost no food and water — and, we discover, there’s cannibalistic exploitation in the group therapy room. 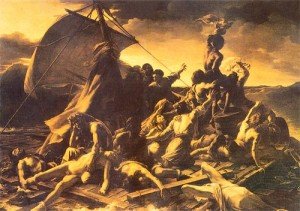 The group dynamics are absolutely on target.  This is an author who understands human beings on the deepest level:  what a pleasure to be in his company.  The acting is uniformly excellent.  John Gazzale plays Donald’s death with no-holds barred passion.  Samantha Fontana shows sustained power as the smart, bitter Cora.  Andrew MacLarty, with an alluring blend of innocence and seductiveness, makes you love Tommy.  In an unforgettable performance, Gillian Rougier fairly dances through her role as Nairobi, a hearing and mentally impaired Black woman who has lost just about all and will now lose the rest.

There’s a lot of blame thrown around among these desperate human beings: Michael blames Donald for infecting him, Cora blames the guy who gave it to her.  The government comes in for blame for not doing more to find a solution to AIDS, as the government was blamed in the 19th Century for gross safety lapses at the time of the shipwreck of the Medusa.  The psychiatrist blames himself for encouraging sexual liberation, “freedom”, in the ‘70’s before implications were known; that’s why he’s a weak figure, asking, uncertainly, after a pause, helplessly when he hears a tale of desperation, “how does that make you feel?”  (Hey, man, how do you think that makes me feel!)

With all that blame, is there forgiveness?  That’s a biting question in this play, and to the credit of its great realism and tough mindedness, never answered.   But there is love, because what else is there?

Pintauro’s Raft of the Medusa is an outstanding theater experience.

Raft of the Medusa plays at the Cherry Lane Theatre in NYC’s Greenwich Village through October 22.

*See Wikipedia for the history of the event and the Louvre for information about the painting.

Very little changed from the original production which was filmed archivally and can be viewed at the Lincoln Center Library. -joe pintauro August 2015

I LOVE comparing things like two versions (do it all the time, am even thinking of writing a book about it, called “Versions” … but I’m not enough engaged with this play to get the early script etc. However if it moves on to a bigger venue, I bet somebody will do the job.

I guess that I am not going to find out!

That’s a good question and I don’t know the answer, though I’d like to. So in writing about it I just wrote straightforwardly about what was there now.

How does the current version of the play differ from the original? We are told that it has been rewritten for this production.

That’s such a good point — that the person who seemed least able to commiocate was so fully communicative. Also your comment made me realize about this character also that she seemed the least capable, and in a sense turned out to do the most.

Thank you for your brilliantly insightful analysis of this superb drama. Although the subject is AIDS, the play is about the human comedy and uses the situation of AIDS as a vehicle. All of the parts are exceptionally well played. One, that struck me as especially true to life, was the portrayal of Nairobi the homeless, hearing impaired drug addict by Gillian Rougier. She brought this street person to life and capitalized upon what appears in the first instance to be a limited ability for expression, to create a person who communicated totally with all the cast and the audience.… Read more »