Pipeline Theatre Company’s Caucasian Chalk Circle is one of the best productions I’ve seen all season, if not the best.  It’s a complicated and fascinating play within a play, fired by Brecht’s moral passion, in which a visiting bard, The Singer, spins his tale to two work groups in Communist Russia contesting over control of a fertile valley.  A solution to the conflict — a moral — emerges from The Singer’s dramatized story.

During a civil war, the Governor and his wife, threatened and rushing to escape, forget to take their infant, Michael, with them (the Governor’s killed but the mother gets away).  A servant girl, Grusha, rescues the baby and, to save him from the Prince, flees to the mountains pursued by the Prince’s soldiers, the Ironshirts.  Grusha’s ingenuity, stamina in crossing vast distances through the cold Caucasus mountains with the child in a sack slung from her shoulders, and courage in the face of obstacles can only be compared to the flight of Eliza in Uncle Tom’s Cabin.

Thrust out of a brief refuge in her brother’s rural house, Grusha finally agrees to marry a villager who’s on his deathbed so that she and the baby can have a roof over their heads.  But after the wedding, the Civil War ends and her husband, no longer threatened by the draft, wakes up hale and hearty!  She’s stuck with a live husband — just when her true love, the soldier Simon, released from war duty arrives to find her married to someone else (though her marriage is, luckily, unconsummated).

Also now that war’s done with, Baby Michael’s mother has decided she wants her child back — after all Grusha’s huge sacrifices for him and the love she bears him.  Back in town, we meet one of the most fascinating characters Brecht created, Azdak — for his story check out the play.  But Azdak through a convoluted series of events becomes a Judge who in an erratic and corrupt way tends to favor the poor and the oppressed.  When the case comes before him of which is the “real mother,” Grusha who took care of the baby, or the birth mother, Azdak devises a solution reminiscent of the Judgment of Solomon: you can bet the one who loves him most wins and you can bet that’s Grusha.  Things work out well also for Grusha and Simon.

The Caucasian Chalk Circle has a vast number of characters and the many actors, except for The Singer, play multiple roles.  The acting is without exception, and without even a moment’s lack of focus or concentration (not anywhere, and I was in the first row and in arm’s reach of the actors) exceptional:  professional, well-trained, moving.  Three parts are particularly key.  Grusha experiences the gamut of human emotions and experiences, and Maura Hooper, in this huge role, expresses these whether subtle or large scale.  The part of Grusha is so central that the success of the play truly depends on it and Ms. Hooper carries it off with great stage presence and charisma.  The roll of Azdak is similarly key in the later part of the play where Gil Zabarsky in the part is powerful, rakish and hilarious.  And throughout Michael R. Piazza as the Singer bridges the episodes with a voice brimming with thoughtful tenderness;  his face constantly reflects the experience of taking in the events he’s describing.  But in truth the same could be said of everyone — these are such good actors!

Talk about production values!  Using, well, not a lot — beams, rope, a ladder, a large and wondrously ragged piece of cloth, the designers of this off-off Broadway production conjure up vast distances in a varied landscape, from city to rural mountain villages, treacherous bridges crossing precipitous valleys — I could only think, Spider Man eat your hat.

The puppet that represents Michael as a toddler has a refreshingly original look and conveys the fluctuating vitality and unease of the young child.  The puppets of the men hanged up there are bedraggled and poignant.  The music, both in the background and accompanying Brecht’s songs suggests Russian folk songs and Kurt Weill — just right.

But what about that solution to the conflict — the moral of the story?

Brecht drew upon an old Chinese play for Caucasian Chalk Circle but made an important change:  in the physical tug-of-war between the child’s birth mother and the woman who cared for him, the birth mother in the old Chinese story spares her child by releasing her hold on him, while the woman who cared for him would tear him apart.  It’s reversed here:  Grusha, who has cared for him, puts her own desire to possess him second and acts upon what’s best for the child — she let’s him go — while the birth mother in her selfish urge to possess him would tear him limb from limb.

From here, Brecht segues into lyrical poetry about possession, expressing the view that those who nurture and take care of things are the ones who should own them.  Here, Brecht is expressing his Marxist point of view;  he’s writing about property, and his view that ownership should be in the hands of those who do the work, like Grusha.  This idea came across with particular force in a staged reading of The Caucasian Chalk Circle at Classic Stage Company a couple of years ago:  if I hadn’t heard it there, I would have missed it here.  There’s so much stage action toward the end of this production that the lyrical and visionary Brechtian poetry, the play’s poetic peak, is interrupted, and Brecht’s idea of ownership does not come across clearly.  Too much weight is given to the importance of people being “good” — which Brecht didn’t much trust anyway — and too little to his political purpose and view.

Nevertheless this is a richly realized production of The Caucasian Chalk Circle.  It’s so good I can hardly wait for what Pipeline Theatre Company does next!

The Caucasian Chalk Circle  plays at the John and Seward Johnson Theater at Theater for a New City in NYC’s East Village through March 19. 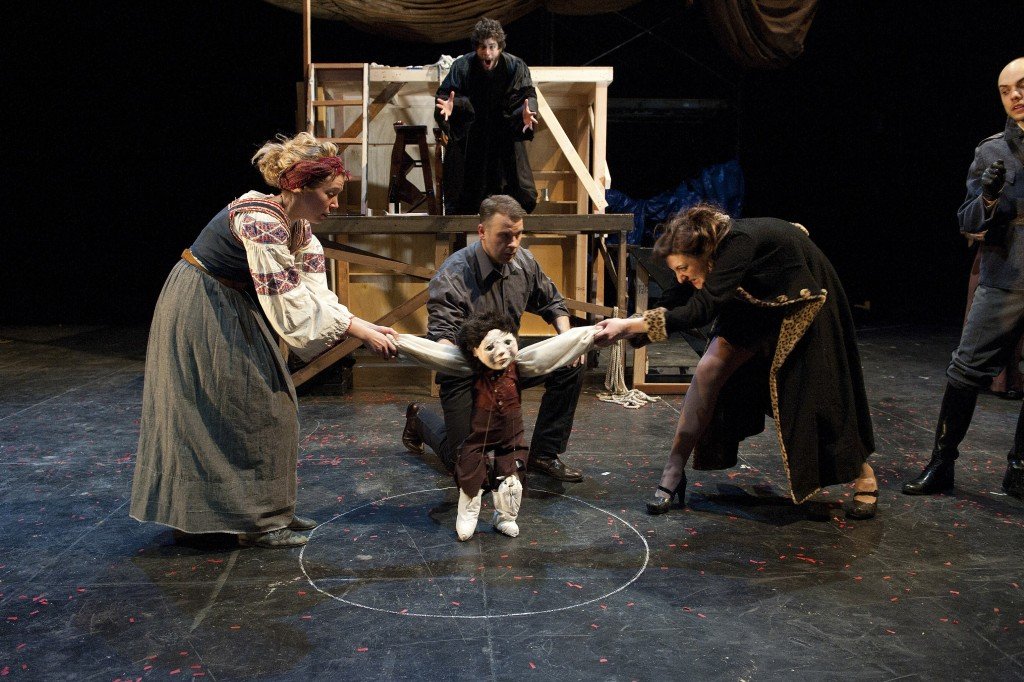 … oh, never too late for nice. (I’m a little blind to typos, whenever for some reason I go back to a post, I — oh, no! — see one I’d missed so, actually, I AM appreciative when someone cues me in.) Really, thanks for writing. Yvonne

I’m a bit late to this party but wanted to commend you on your classy response to Marc. A typo, no matter how common the word, is just a typo. Big bloody whoop. It in no way detracts from a very insightful and thorough review.

A lot of people do, though. Most of all, thanks for your sharp eyes and for taking the time to write. I appreciate it. Yvonne

How can anyone in any way seriously consider the work of any theatre critic who isn’t even aware that she has misspelled one of the very most basic theater words: “role”?!?

Hi Tullia, and thanks for keeping an eye on Let’s Talk Off-Broadway! Yvonne

Reading your review, I can hardly wait to see The Caucasian Chalk Circle. thanks as always for you great reviews. Tullia

This, a work of genius, is portrayed with highest excellence delivers such a plethora of messengers –meanings and emotions. This is a must see – a truly memorable theater piece brought to us by a wonderful and most empathic and intelligent cast. Theater at its best!