Benita Cereno is electric — a powerful, hard hitting play, historically and philosophically resonant.  Set around 1800, and based on an actual incident, modified by Melville, and again by Lowell, it tells the story of a slave rebellion on a Spanish merchant ship in which all the Spanish officers have been killed except for the Captain, Benito Cereno.  Anchored off the coast of Trinidad, Amasa Delano, Captain of an American ship, notices through his spy glass that the Spanish ship seems to be in trouble, and out of the compassionate rules of the sea and his own generous nature, approaches and boards, accompanied by his Bosun, Perkins.  Everything is indeed unexpected, out of order, and deteriorated aboard the Spanish ship.  But why?

Hunger and thirst are everywhere and the Black slaves, sharpening knives, unknotting ropes, seem to have the run of the place, while Captain Cereno, though attentively cared for by his Black servant, Babu, is clearly ill, uncommunicative and — most irksome to Delano — unappreciative of the 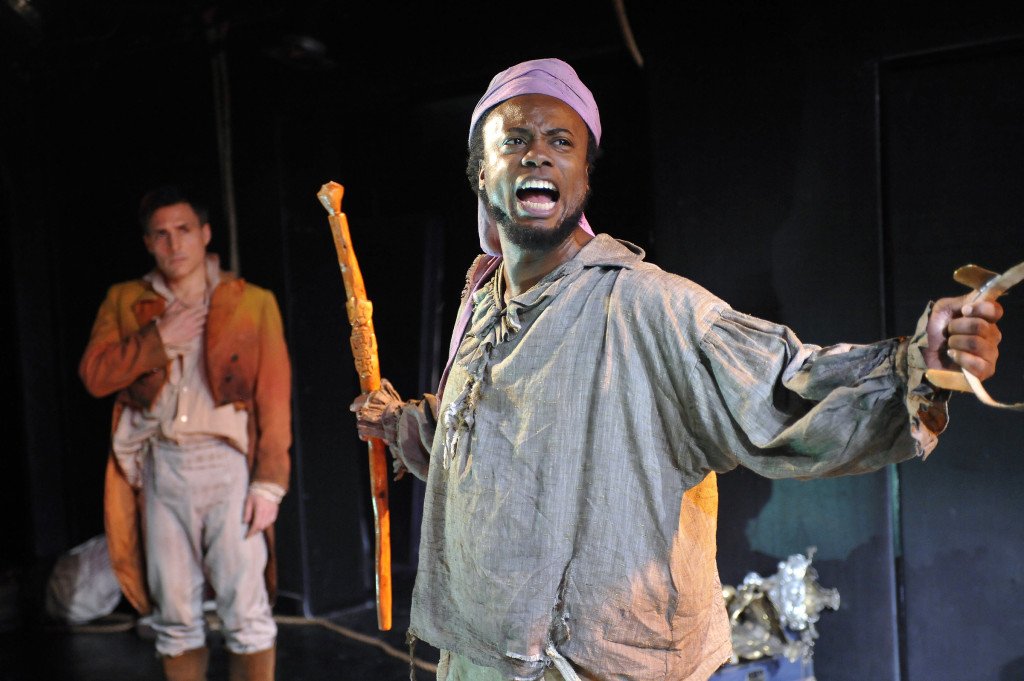 sustenance he provides.  This doesn’t stop Delano, though.  His optimistic personality and positive view of life lead him to find a positive rationalization to explain everything he sees that’s amiss.

Since he takes at face value Babu’s loyalty and hovering concern for the ailing Cereno, as the signs grow darker, Delano even entertains the thought that Cereno may be planning to murder him, but again his tendency to think the best of everyone leads him to dismiss that idea — partially.   In fact, everything is opposite from what it seems to him.  There’s been a slave mutiny, the Spanish officers have been killed, and Cereno is under the knife — and in a chilling scene the razor — of Babu who has complete control.  Death lurks in every step.

We in the audience catch on right away, Perkins almost as fast, and so we watch Delano cheerfully explaining away his growing unease, and persisting in his plans to improve things on board and repair the ship.  It’s a scary dramatic tension worthy of Edgar Allan Poe, Melville’s contemporary.  And it’s fulfilled in an equally brilliant dramatic explosion.

Melville’s great descriptive language is used, rearranged, and augmented by the poet Lowell.  Every line resonates, the density of meanings a feast for the mind as the dramatic excitement is a feast for the spirit.

The characters are fully drawn, and at the same time represent ideas larger than themselves.  Delano (though he at one point brushes off the idea) comes to represent the American Republic.  His optimism seems that of the new nation and its belief in itself.  He’s compassionate, but loaded with firepower.  The complexity of his attitudes toward the “Negro” is a study of equivocation: the Negroes are human beings, he declares, pleased in his own broad minded views, while celebrating their natural abilities as servants.  His denigration of women is only offset by the John Adams-like appreciation Perkins has for his own wife.

Cereno is an elegant representative of the ancien regime with small pale hands, unused to work.  Babu is the clever Black whose Uncle Tom masquerade covers up his plot to take over the future.   Each of these men engages in one-on-one, significant conflicts with the others, representing historical and philosophical themes:  Old World versus New World, Africa versus Europe and America, Blacks versus Whites, Pagan versus Christian, monarchy versus democracy, freedom versus slavery, servant versus master, New England versus the Southern states, James Madison versus Thomas Jefferson.

In this shower of dualities, technology is a bottom line:  knives versus guns.  I’d like to say more about this but don’t want to reveal the end of the play, which is stunning.

But given the importance of knives versus guns, there’s a small cavil:  why, in the play, aren’t there any guns on the Spanish ship?  The American merchant vessel, after all, is well armed.  This is a bothersome question.  Was there an answer in the novella?  I had to know so I read it and was happy to find that, yes, Melville describes the Spanish guns and quite specifically how they were disarmed.  The Spanish ship would have carried guns and Lowell shouldn’t have left them out, even if his dramatic purpose was the heighten  the theme of guns versus knives:  it’s implausible and manipulative, dissipating the sense of tragic inevitability.  The play brings to mind O’Neil’s The Emperor Jones  but, partly for this, doesn’t quite reach that iconic level.   As said, this is a small cavil — don’t miss this thrilling play.

The actors — and dancers and music makers since this play verges on the operatic in its variety of expressions — are very strong.   As Babu, James Jorsling’s movements, intonations, timing, intensity, and his shifts from loyal servant to canny master are beyond fascinating:  you don’t watch how good he is, you see the very character he creates.  One of the great strengths of this play, and a source of its rich ironies, is the portrait of a man of many contradictions who’s aware of none: Captain Delano.  Arthur Bartow conveys Delano’s complexities  while maintaining his naval captain’s centered sureness and unity of personality, a mainstay of the play.  While tragic, there’s a good deal of humor in Benito Cereno, particularly in the self-satisfied certainty with which Bartow expresses Delano’s obtuse prejudices and misapprehensions.

Benito Cereno was first produced in NYC in 1965, when it won an Obie as part of Robert Lowell’s trilogy “The Old Glory,” and Roscoe Lee Browne, Frank Langella and others won Obie awards for their work in it.  It was last seen in NYC in 1976.  Thanks to Horizon Theatre Rep for this rare opportunity to see a beautifully written, exciting, and never-to-be forgotten play about themes that are both timely and universal.

Benito Cereno plays at the Flea Theater in Manhattan’s Tribeca through October 16.

I agree, this is really one that must be seen! The acting, words, the ballet, and the story are unforgettable. One of the great theater evenings in New York.

I am so glad you called this to my attention — fast! Correction made. Thank you! Yvonne