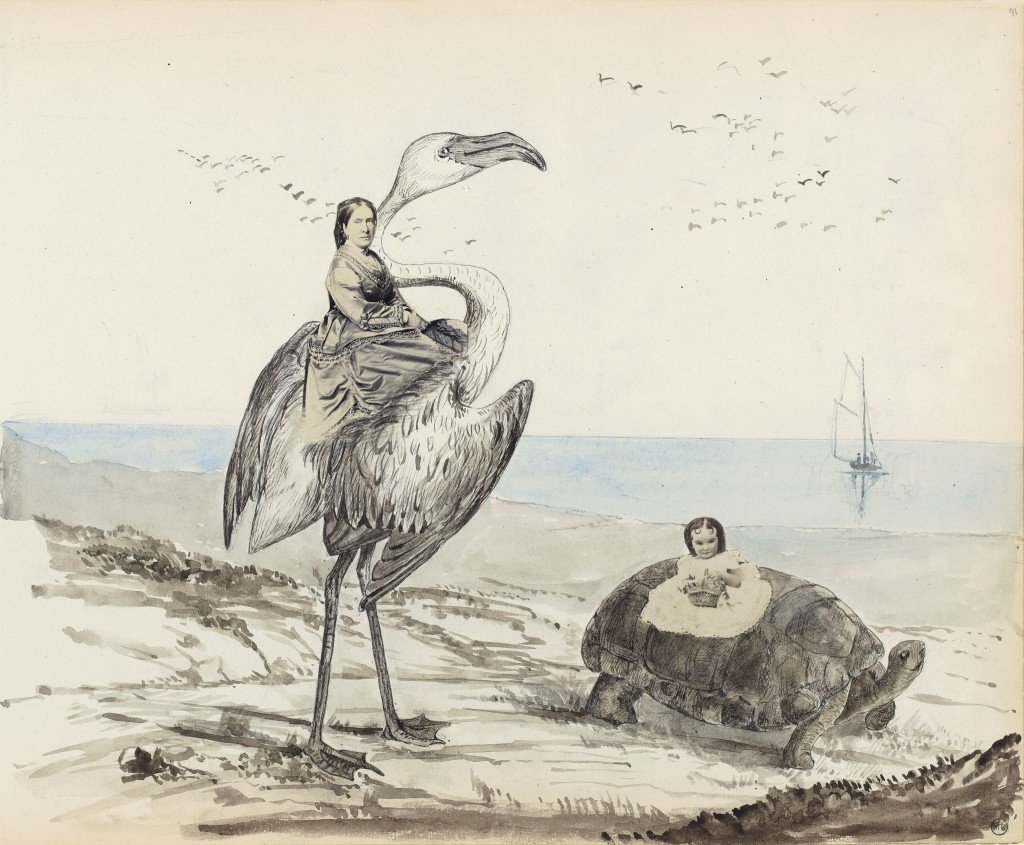 Photography was invented in 1839, and in no time small photographic portraits – cartes de visites– became popular as calling cards and souvenirs. In the 1860’s and ‘70’s aristocratic British women who, this exhibition indicates, led very busy lives, managed to find time to create photocollages using pieces they cut from the cartes de visites, usually the heads, and pasting them on their own watercolors and drawings to create witty, sarcastic, commemorative, and often wildly surrealistic images. They gathered their work into albums.   Not all who did this work were aristocratic British women but it was particularly their domain. The exhibit is a bounty of their images and albums.

Cut and paste allows for the union of things that can never be together, of sights that can never been seen. The collages differ with the personalities of the artists, their skills, and purposes but they almost always bring out a smile – and one senses the artist’s smile, too. In place of the royal family on picture cards, Georgina Berkeley pastes the heads of her own family – why not? Others (top of page) get rides on an ostrich and a turtle. The Bouverie album, below, shows Alice in Wonderland children riding a toad and perched on toadstools. 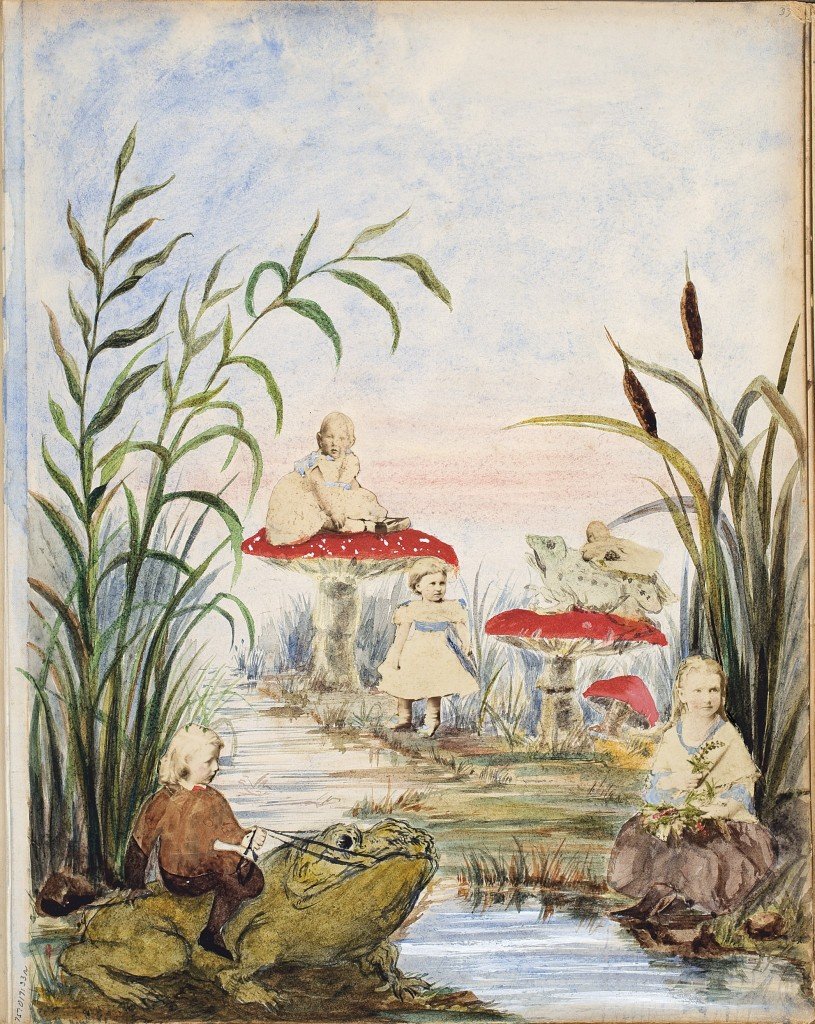 Lady Filmer creates a drawing room scene, below, that includes her own portrait at the table near the back, with knife and paste and the album she’s working on, that of her royal admirer leaning on the table, and her husband, small scale and near the dog. 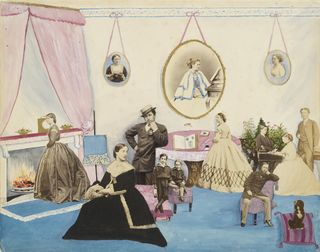 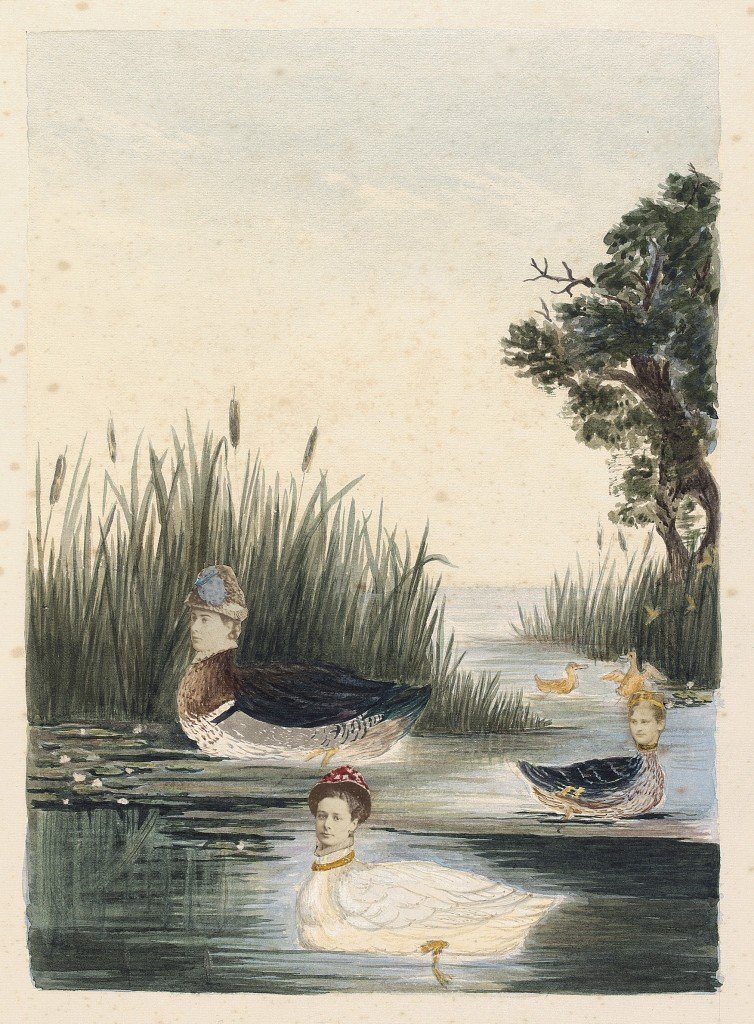 hatted — friends floating around as ducks.  Her most astounding collage: a “family tree” filled with a great variety of animated monkeys — all with human faces: Darwin at work.  No photo available for that one — guess you’ll have to just go and see the exhibit!

As soon as that ostensibly “objective” medium – photography — was invented (1839), artists, including inventors themselves, raced beyond “realism” to create imaginative, subjective images.  Here, too, we see the human imagination using objectivity not as an end … just a starting point.

These Victorian photocollages are highly innovative.  Picasso’s Still Life with Chair Caning of 1912 is regularly cited as the major turning point in modern art because his use of collage ushered in Synthetic Cubism. Take a look at it; Picasso has dismantled various visual realities – oil painting, oil cloth reproducing the pattern of chair caning, pieces of paper, newspaper type transformed into paint — and reconstituted them anew, tying the whole together with a rope. There’s a lot of playing with pictures there too, as well as a great achievement in opening up new ways of seeing. BUT, though it’s often said, he didn’t invent collage.

By the way, way before Picasso artists of harbor scenes were framing their pictures in rope. And, amateur artists were cutting up photos and combining them with drawings and painting to create assemblages to express their social, psychological and aesthetic messages, their own visions.
“Playing with Pictures” is at the Metropolitan Museum of Art, NYC, through May 9.

They are on the wild side — and just when we thought the Victorians were stuffy!