Decade at a Glance is an exhuberant, humorous and joyous ensemble piece that tells the story of the Great Depression of the 1930’s through music and dance. While it’s inspired by sources directly from the period, it successfully goes beyond them to create its own new artistic whole, because, I think, it’s fired by personal, creative compassion for the struggles for better lives of those it depicts, viewed through a hopeful and affirmative lens.

Decade draws on photographs of Walker Evans and Dorothea Lange (compare the production photo below with Dorothea Lange’s “Migrant Mother”), songs of Woody Guthrie and others, and for its text, passages from James Agee’s Let Us Now Praise Famous Men as well as published interviews of the period — an immediately fascinating idea that works beautifully.  It follows the story of the Oakies, who lost their farms in the center of our country to the dustbowls and banks (with a spirited rendition of “Jolly Banker” by Woody Guthrie) and set out in dilapidated trucks to create new lives in California.  As migrant laborers picking California’s bounty of produce, they encountered brutality and prejudice (Guthrie’s “This Land is Your Land” with an ironic twist).

The choreographed ensemble creation of a jam-full open truck with a Conestoga wagon-like covering, its stressed engine puffing and spitting to make it over the mountains, is wonderful.

In focusing on the rural story of the Oakies, the narrative essentially parallels that of John Steinbeck’s Grapes of Wrath, a point that should have been mentioned in the program, even if no specific text was taken from it.  Decade also casts a glance at the urban story — early on the ensemble constructs a choreographed sky scraper with a tumbling suicide, and a cast member sings “Brother can you spare a Dime” by Yip Harburg and Jay Gorney — a song so powerful that if anything of art can alter how one thinks and acts, this can.

The attempt to take on both the rural and urban story is ambitious.  I missed somewhat a central focus on an individual or family, but Decade is comprehensive and kaleidoscopic, and the music, choreography, and talent of the performers, students at the Stella Adler Studio of Acting — all acting, singing, dancing, and with some playing musical instruments — surround one and altogether carry it through.  The Harold Clurman Center for New Works in Movement and Dance Theatre seeks “to create vital and visceral performance work that responds to our world and has meaning for our lives.”  Decade at a Glance  is a moving and exciting all-over expression of a significant time in the American experience.

Decade at a Glance, presented by Stella Adler Studio of Acting and The Harold Clurman Center for New Works in Movement and Dance Theatre, in association with Interaction Arts Foundation, plays at the Stella Adler Studio on West 27th Street in NYC February 11-13, 17-19, March 6-7.   In March it will move on to play in New Orleans. 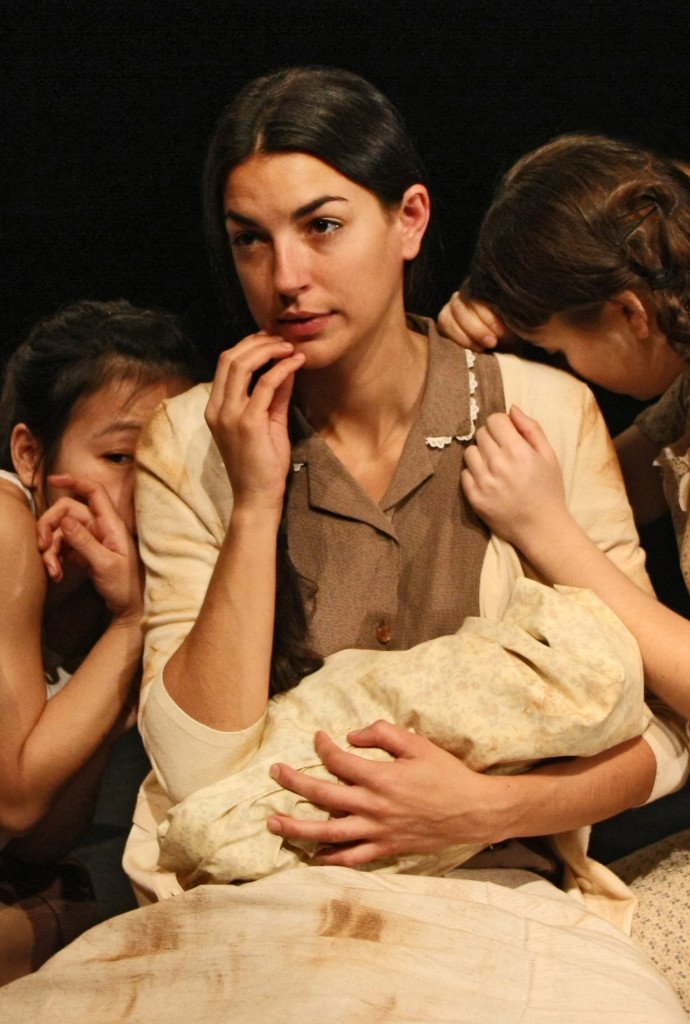 Mother and infant in Decade at a Glance, photo courtesy of Stella Adler Studio of Acting and The Harold Clurman Center for New Works in Movement and Dance Theatre

I have rarely, if ever been so moved by ensemble work. This group of actors was so in tune with each other that the timing of their movements seemed to have some psychic connection. The many tableaus were breathtakingly picturesque and gave this audience member an acute connection to the drama. There were many memorable parts including the wind storm scene and the outstanding vocals of Elise Toscano. I could see this again and again. Bravi tutti!!

This was a marvelous evening of very talented young performers carrying out a masterful work. Much credit must be given to the creator, director and choreographer – Joan Evans. One appreciated the deep tragedy of our 1920’s and 30’s depression which is a poignant awareness to the current ‘recession’. The performers became the scenery, be it a sky scraper, an old truck, a house, a cotton field, etc – there was even a flat tire – reminiscent of Jacques d’Amboise’s cannonballs in his 1985 Event of the Year: Andrew Jackson and the Battle of New Orleans. The music was appropriate,… Read more »