True West, written in 1980, is about sibling rivalry between two estranged brothers of opposite temperaments and life styles brought together in the home of their mother, in Southern California, while she’s traveling in Alaska.  Austin, the younger ivy-league educated, conventionally living screen-writer — short and rumpled — is house-sitting for his mother while finishing up a screen play near-to-contract with a Hollywood producer when Lee — the rangy, handsome one (though you wouldn’t know it from the photo) — a volatile, desert roaming, manipulative thief shows up, distracting, threatening, and simply refusing to disappear.

The brothers are crushed together by Lee’s insistence on remaining, interfering with Austin in every way, but also, Shepard hints, by tangled emotions, ambivalent love and appreciation, as well as jealous rage at the traits in the other opposite their own.

Until Lee horns in on Austin’s professional territory.  With a heavy dose of charm, browbeating and manipulation, Lee invents a storyline and wangles a movie contract out of Saul, Austin’s producer friend.  Saul is willing to produce both of their storylines, Austin to write the actual script for Lee’s as well as for his own, and both brothers will make a lot of money.  But Austin, infuriated by Lee’s take-over, and overwhelmed by jealousy at Saul’s attention to his semi-literate brute of a brother, refuses.  He sacrifices his own contract to his fury, himself responsible for his own dizzying downward spin — though with plenty of help from the cleverly manipulative Lee and, anyhow, you can sure understand the psychological pressures that drive him.

There are improbable moments where I doubt he’d say that pokes a hole in suspended disbelief, and there are unconvincing plot turns, e.g., would Saul really fall for Lee’s script, given what we know about it?  Why does Austin’s wife and family, briefly mentioned, mean so little to him?  The second act has more of these than the first.

Still, Shepard brings to life a tense drama and a vivid world.  Lee is a great character and his consistency creates a powerful ending.  The strength of this production hinges on the fine acting of Brionne Davis as Lee, whose gestures, timing, and driving moment-to-moment shifts are fueled by motivation and personality — with no breath for let-ups.

Ryan Spahn plays the writer superficially, a sitcom wimp, and isn’t credible in his out-of-control scenes.  Here’s something that interested me:  the lines Shepard wrote for the mother seemed silly… how could a talented playwright make such a mistake?  But thinking about it, I realized that if the same lines were spoken by a narcissistic, hippie, free spirit character, of the place and time, instead of the “Bingo mom” conceived in this production –leather fringe instead of voluminous hopsack — they’d not only make sense, they’d deepen understanding of the characters. 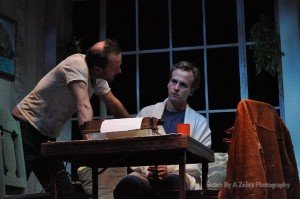 Brionne Davis as Lee and Ryan Spahn as Austin in True West, Bitten By A Zebra Photography

Your review really makes me want to see this play. It sounds like an excellent and intriguing variation on Cain and Abel.