This play is for everybody who loves words, word play, unexpected puns and rhymes of an unbound imagination.  It’s hilarious –and expands one’s sense of the English language.

People like to make a distinction between “plot driven” stories and “character driven” stories – this adaptation of Pierre Corneille’s play by David Ives is “word driven.”  If you’re going to enjoy it, it will be because you love the fancies words can spin, the hilarities they can spring on you, and above all the deep down satisfying pleasure of big warm laughs, one after the other. 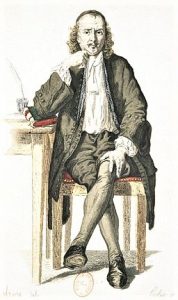 Corneille, whose life spanned most of the 17th century, is the father of both the great tradition of French tragedy and comedy.  For Voltaire, Corneille had shown that the French language could be a medium for great art, as Homer had done for ancient Greek, though subsequently Voltaire altered his views.  Le Menteur premiered in 1644,  Meet the big liar, Dorante, who starts us off by boasting of his military career in order to impress two women he meets in the Tuilleries in Paris.  The women – conveniently for farce – have names that sound alike, Clarice and Lucrece.  Even Dorante is mixed up about which is which.

What follows are mistaken identities and amusing confusions.  Dorante, thinking that he prefers Lucrece (no, he really prefers Clarice), initiates the lie that he is already married in order to avoid marrying Clarice – a lie that, as the truth snaps at his heels, he spins into ever more complicated twists and turns, the riotous inventions of a genius liar.  Clarice is engaged – secretly of course – to someone else, duels are arranged, the butler is involved with … as said, the plot is not so much the heart of the matter as the humor.

Michael Kahn has directed an able cast, with Christian Conn as Dorante, Ismenia Mendes as Clarice, Amelia Pedlow as Lucrece, and others who share their perfect timing to fill out the humor.  I particularly loved Carson Elrod as Dorante’s bumpkin butler — naive but he learns fast.

Taking off from the original plots, David Ives adapts with his particularly liberated and fanciful language so that they are truly new creations, ones that in their way put us in closer touch with the spirit of the original plays, and the gaiety they brought to seventeenth-century theater-goers, than a more “faithful” translation could give.  Through Ives’ bold brilliance, we share the joy inherent in these wonderful comedies.  I count it as one of the great good fortunes to live within range of that theater treasure — Classic Stage Company – and to have seen these plays.

Of the three, The School for Lies, was, well, the funniest – simply over-the-top, unforgettable – one of the rare times I’ve seen a play twice in one run, partly because of Molière’s vivid characters and partly because it featured, among other fine actors, the incomparable Hamish Linklater. But all bear the mark of Ives’ wit, uninhibited imagination, civilized perspective, and joie de vivre.  It’s a privilege to have seen all three of these Ives’ creations.

It’s a privilege to see The Liar.

The Liar plays at Classic Stage Company in Manhattan’s East Village through February 26, 2017.  For more information and tickets, click here.

* Classic Stage also produced Ives’ profound play about Spinoza, The New Jerusalem, and the  popular play Venus in Fur which opened there before moving to Broadway (as well as two others I haven’t seen).

Yes, indeed this was a joyous evening theater. The script, the acting, and the music are all synergistic which makes this such a wonderful production. This is no lie. Perhaps we need blue, white and red caps that say Ives makes French comedy great again!

yvonne…
your review makes me wish i lived in NYC…!! with love, shelley