… what a difference a king makes …

In Prince of Players, a private, personal and intimate story – that of an actor thrown out of work by a King’s decree — plays out against a canvas of broad historical meaning.  Although I’ve seen thoughts to the contrary, I found it monumental, and Carlisle Floyd’s swelling, varied music, performed by a cast of fine singer-actors supported by a full orchestra fulfills and amplifies the strong emotions and large resonances.

We are in 1661, in the period of the restoration of King Charles II of England after the dictatorship of Cromwell and the Puritans – with both a capital and a small “p”.  The theater-loving King Charles II – following the latest French fashion — decrees that women’s roles must no longer be played by male actors, as they had been, but must now be played by women. 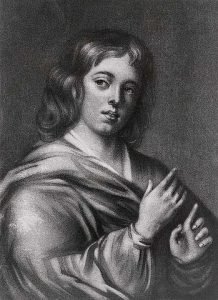 This may seem like a step in the direction of naturalism and perhaps of fair play, but it sure pulls the rug out from under the career of Edward Kynaston, a male Shakespearean actor of androgynous beauty who built his fame playing women’s roles, such as Desdemona.  A victim of collateral damage, he loses everything – career, livelihood, status, and love.  He’s thrown to the lowest levels of degradation but he claws his way back to triumph again on stage – to play Othello.

A particularly complex character, Margaret Hughes is an underling who comes to the fore, starting off as Kynaston’s dresser in the years of his success in playing women’s roles. She holds in her heart two passions impossible of fulfillment: a desire to act on stage, forbidden to women, and desire for Kynaston, whom she’s in love with while knowing he’s erotically drawn to men.  Charles’ decree turns her desire to act on stage into a real possibility:  seizing the day.  she rises  to become a fine and important actress, her success paralleling Kynaston’s fall from grace.  And, still in love with Kynaston, she uses her new empowerment to empower him.  She enables him to revise his great acting talent now to play successfully the roles open to him — male roles.  From having once played Desdemona, he now plays Othello.

The heart of the matter that comes with a surprise and gives this narrative an inspiring character is what we, and Kynaston, learn about Kynaston’s talent for acting.  It’s gender independent.  The question which at first seemed fundamental — will he play a female or male role? — turns out to be incidental in the face of his great artistic gift.  I found this moving in its operatic development (although I didn’t find Kynaston’s fundamental personality upheaval that came along with it convincing.)

I’m struck by close parallels in the story of Prince of Players and that of the Academy Award winning film, The Artist, of 2011, discussed here below.   While The Prince of Players takes us the world of 17th century British theater, The Artist takes us to the world of movie-making in 1927 when the new talkies were taking over from silent films. Valentin is a great silent film actor, but he’s over-confident of his star power and lacks confidence in his ability to use his voice as an actor so he refuses, like Kynaston, to even try to relearn his craft. Failing to adapt, he’s swept to the bottom of the barrel, as Kyaston had been, and is eclipsed by the success in the talking films of the young actress, Peppy, who had always loved him.  Peppy, like Margaret, in love with the great artist that she knows Valentin to be, finds a way around his pride, enabling him once again to rise and fulfill his great artistic gift.  (Unlikely, but worth mentioning – since the best known source for modern adaptations of the story of Edward Kynaston is Samuel Pepys, one wonders if the name Peppy in The Artist is an elaborate if obscure in-joke, pointing to sources.)

Larger roles in this production were double cast.  The cast in the performance I saw Saturday, February 25, 2017 were for the most part fine singers and always tone-perfect actors. Edward Kynaston was played by baritone Michael Kelly whose rich voice filled the ample Kaye Playhouse, and magnetic stage presence filled the full range of emotions in the part.  Soprano Maeve Hoglund was thrilling as a dramatic singer in the intricately drawn character of Margaret.  These two played off one another with crackling excitement, above all in the final intensely dramatic, suspenseful and cathartic final scene.

Prince of Players is based on a play made into a movie, The Compleat Female Stage Beauty by Jeffrey Hatcher, both drawn loosely upon references to characters and incidents of the period, and on references to Edward Kynaston in Samuel Pepys’ diary.  The opera premiered at the Houston Grand Opera March of 2016, and, produced by The Little Opera Theatre of NY, played at the Kaye Playhouse at Hunter College, in Manhattan, where I saw it, February 23 – 26, 2017.

I liked the book-ending with “Othello.” The opera starts with the final scene with Desdemona played by Kynaston and Othello played by a heavyset actor – not very interesting, pedestrian but acceptable. Then at the end of the last act we see it again with the two principals so realistically. really thought that Desdemona would have actually been smothered and strangled due to jealousy of our Othello — that did not happen but it was certainly one of the most dramatic Othello Desdemona interactions I’ve ever seen. The Little Opera Company deserves all of our support.