Ives’ play Venus in Fur roughly follows the extreme SM relationship between the man and woman in the novel, which allows for plenty of sadism, masochism, and a beautiful woman in Victoria’s Secret type of lingerie tempting and teasing a man.  Voyeurism, sexual revelation, sanctified by touches of social history and the “serious” overtones of a “classic novel” — you can see why someone thought this would be a good play to produce.  The play’s repetitive quality and predictability, and — a casting problem — a total lack of chemistry between the actors playing the man and woman, make it boring.

A young writer has spent the day auditioning women for his first play.  That he instead of the director is holding the auditions introduces a sense of authorial fantasy.  He’s closing up shop when a pushy blond woman thrust herself into his grungy office and insists on reading for the part.  Thomas is impatient, wants to get home to his girlfriend but Vanda won’t take no for an answer.  She’s not on the list for readings — her agent’s error, she insists (though it enhances the “is it real?” sense), and keeps talking.  Eventually she badgers him into letting her read for the part while making him read the male character’s lines.

From her first lines, she’s transformed from a street-wise, ordinary girl with a New York accent to the upper class 19th century countess she’s portraying.  She insists that he not merely mouth his lines but really play the part, thus enmeshing him in the archetypal slave and master relationship, with him the slave, that he’s written into the play and, through that, the “real” one with her.  They switch back and forth between play acting and being real, between their ordinary personae and the high class SM characters he’s written into his play;  with each switch, their power dynamic takes a further step toward reversal.   At the start, he’s in charge, auditioning, choosing:  by the end, victim and victor have changed places, and sexes.

In its criss-crossing of power arcs, Venus in Fur recalls Amiri Baraka’s (LeRoi Jones) Dutchman of 1964, seen in a recent revival at the Cherry Lane Theater, but whereas in Dutchman, in a similarly locked space, Blacks rise from victims to victors, here it’s the politics of feminism.

In contrast to the Obie award winning Dutchman, however, Venus in Fur doesn’t crackle and move with devastating speed toward a brilliant and unexpected denouement.  It repeats itself as it lurches toward a predictable ending.  Oh not again, one says to oneself (at least that’s what I said to myself, can’t speak for the rest of the audience) as the tall, shapely, and dramatically strong Nina Arianda once again takes off her street clothes to reveal her sexy black lingerie, or Victorian ruffles, or puts them on again, or off again, or on …   I thought she had a lot of stamina for changing clothes.  So much of this play is what the woman is wearing.  A move to boots could be called the play’s preliminary climax.  Wow!  Black boots.  Sensuality and sexual dynamics are in the line of sight but not in the air.

Venus in Fur plays at Classic Stage, on East 13th Street in NYC, through February 21. 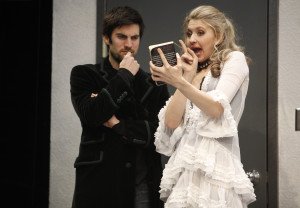 Agree – a long and dull evening. To me there was no message in this production – better that they did the original – at least it would have been of historic interest.