… when the syllabus is better than the class …

Two one-act plays by A. R. Gurney are presented in tandem, Ajax, as in the ancient Greek hero, and Squash, as in the game.  Having enjoyed many Gurney plays, I was keen to see these but Ajax and Squash are not Gurney at his best.

In each play, a cheeky college student challenges, and to a degree upends a serious-minded college teacher.

Ajax (45 minutes), starts off promisingly.  Audience members descend downstairs at The Flea, enter what looks like a classroom, and some get to sit at a desk with a syllabus for Intro to Classic Greek Drama awaiting them.  The syllabus looks great, just like the real thing, from Week 1, Intro to Greek Drama, through Aeschylus, Sophocles, Euripides and beyond – I want to take that course!   The play isn’t as good as the syllabus, though. 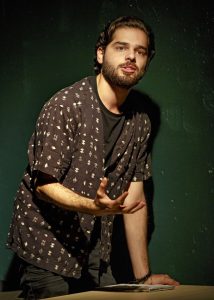 A student, Adam Feldman, starts the class late in the semester, makes no attempt to catch up, and defies the teacher-scholar and author of the orderly syllabus, Megan Tucker, by ignoring the assigned essay topic in favor of his own topic:  Sohocles’ Ajax as an example of PTSD.  It turns out that PTSD is a new idea for Megan – she’s unsure about what it is, and can’t even get the initials right, Adam has to explain them (oh those dumb ivory tower college teachers). 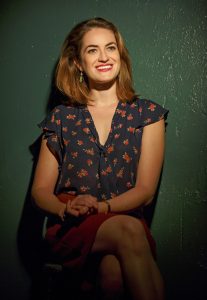 The view that Sophocles’ character, Ajax, represents a warrior suffering from  PTSD has had a lot of play for a long time, so much so that the Pentagon, in 2009, funded an independent theater company, Theater of War, to visit military sites and stage readings of Ajax and also of Sophocles’ Philoctotes to help soldiers of the Iraq and Afghanistan wars objectify their struggles with PTSD.  No classics teacher would have missed that!  Hooray for the beleaguered classics resonated throughout the profession!  The classics matter!

From here the play becomes even more unlikely and more forced.  Adam writes his ideas not as an essay but as a play-in-process, in which he finds parallels that don’t exist between the Israeli occupation of Palestinian territory and the Greeks who set up a siege at Troy.  Megan Tucker, who’s unpinned her teacherly bun for a loose hair-do and is now “Meg”, acts in Adam’s play, and goes beyond that in her enthusiasm for Adam, so much so that — well, I’ll just say that when the powers that be in the University fired her I saw their point.   Adam and Meg, however, don’t:  they blame the University higher-ups for that, as well as for banning the play on University property and things unwind into a shocking anti-semitic rant.

The second, Squash, upstairs at The Flea, 60 minutes, is about an untenured college professor (a step up, Meg was only an adjunct).  Dan Proctor is an uptight, handsome guy who loves his wife Becky, his kids, teaching the classics and the game of squash.  He’s got everything together except tenure and he’s such a one for the straight and narrow, it looks like that will work out, too. 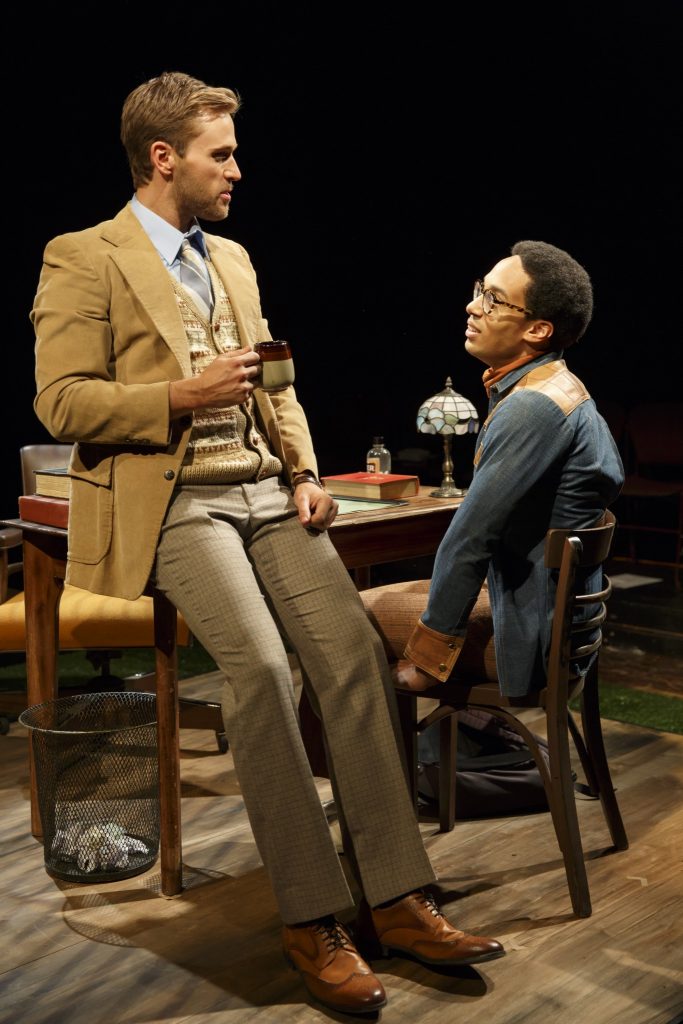 Enter a gay student Gerald Caskey who is hot for the professor, following him to the athletic locker rooms, with a location-appropriate bare bottom episode, to express his passion for the prof’s body, and conferencing with the prof about the paper he wrote that only got a C + about Plato’s Symposium and ideas of love.   The dialog here and elsewhere is so rudimentary it’s impossible to take seriously that we’re dealing with a college professor and his student, or that the college professor has it in him to write a scholarly book of the kind that Dan is supposedly working on.

The dialog was much more witty and to the point in another of Gurney’s plays about college teachers a few years ago, Office Hours, also at The Flea.

Does the seductive Gerald manage to shake up the professor?  Is Dan really gay?  Is Gerald?  Or are we all just sort of a lot of this and a little bit of the other?  Or a lot of both?  Or whatever?  See this play and you won’t find out.

The real class act in Two Class Acts is the acting.  Olivia Jampol as Megan Tucker in Ajax transforms from prim to liberated with great charm and wit.  Her costumes by Sky Switzer are stunning and characterizing.  Chris Tabet is both a type and an original characterization as Adam, the student with the mix of effrontery and ideas.  (In other performances, Ben Lorenz plays Adam and Rachel Lin plays Megan Tucker).

Ajax, the first of these two very disappointing plays, ends having taken the script from The Protocols of the Elders of Zion (https://en.wikipedia.org/wiki/The_Protocols_of_the_Elders_of_Zion ) – Mr. Gurney and the Flea should be ashamed of themselves. As to Squash – at least only just trite theater well-acted. What a double disappointment for the last plays at the White street theater – trust that the new Thomas street theater will regain the excellence of the Flea.