Master Harold and the Boys moves with this compelling force of a Greek tragedy.  It’s classic and iconic, and must be seen.  It is profound in character and social vision.

It even obeys Aristotle’s three dramatic unities – unity of time (within a single day), action (minimal subplots)  and place– described ins his Poetics.

We are in a tea room in a provincial town in South Africa in 1950.  Willie is a young Black man who wants to win a big dance contest and, in a slow time in the tea room, no customers, Sam, an older Black man, is trying to help him loosen up his style.  When Hally, the White teen-aged son of the tea room’s owner comes in, and the two Black men have already utterly charmed us, we are want to know how Harold, called Hally, feels about these two Black men. Thank heavens he seems to like them, love them, even.

Back when Hally’s family owned a rooming house, Sam and Willie lived in, and disaffected from his father, Halley often visited “Sam’s room,” especially when he felt down, for refuge and a warm, easy-going good time. Sam’s almost like a father to him.  They’re like family, right?

Yet Halley’s such an oddball, a brainy loner among his peers, he puts us on edge.  He’s nervous, jerky in his movements, and very much on edge.  There are nerve-wracking phone calls, his Dad, who has been a crippled, sick man for years, is in the hospital, his mother’s there with him, Dad wants to sign himself out but Halley tries to persuade him not to – he doesn’t want his crippled, demanding Dad, who he has to clean up after, at home.

As the play advances, past and present collide.  We learn more about the way Sam has pulled Halley over the rough spots, been like a father to him, and also about the ways apartheid has been felt in that relationship in ways known to Sam but not to Halley.  Halley is caught between that sweet nostalgia and the maddening present forced upon him by his sick, inconsiderate and demanding real father.

Halley is frustrated and furiously angry, but he doesn’t have to truly struggle with the issues, or reconcile his feelings about his two fathers.  Because of the system of apartheid, he has a way to vent his frustrations right at hand, an easy line of least resistance because Halley — the skinny kid among two mature men — is boss here. A loving history, sentiment, all that soft stuff quite aside, the bottom line:  he Master Harold and they are the boys.  Halley can let loose at the expense of others with impunity – and while we know he’s bookish and brainy, we haven’t seen anything to us about his character, in spite of Sam’s best efforts.

Thus Sam comes face to face with reality:  he’s changed.  So is the audience, as the obstinate, inevitable cruelty of apartheid takes its careless triumph over the human spirit.

Leon Addison Brown creates a beautifully full characterization of Sam, mature, experienced in life (though alas, he learns more here), humorous, with deep and protective feelings for Halley and Willie.  He touches our hearts even in the way he walks across the stage of moves in teaching Willie how to dance.  I wish the play had given some hint of an answer to one question:  We know Sam has a girlfriend, but why did this loving man never have children of his own.

Noah Robbins is simply brilliant as Halley, the hyper kid dragging around his heavy book bag.  His characterization is one of those — like Eddie Redmayne’s as Stephen Hawking in the film The Theory of Everything — where it’s hard to believe that the “real” person is anything other than his character.

Sahr Ngaujah conveys Willie’s youthful extroverted vitality – the opposite of Halley’s self-involvement. Willie isn’t a natural dancer like Sam, but he’s out to win the dance contest.  Ngaujah unites a touching clumsiness with Willie’s determination to win, an emblem of victory over limitations.

Frank Rich, reviewing Master Harold and the Boys for the NY Times in 1982 wrote, “There may be two or three living playwrights in the world who can write as well as Athol Fugard, but I’m not sure that any of them has written a recent play that can match ” ‘Master Harold’ … and the Boys.”   Agreed. 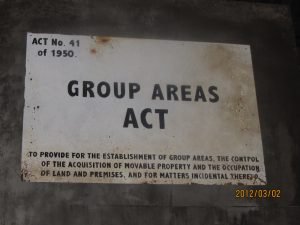 1950.  We wouldn’t necessarily know, watching the interactions of these three characters, that this was the key year  in apartheid’s history in which the Group Areas Act was passed with its formal segregation of blacks and whites, but through Fugard’s play, we  feel its weight on individuals.

Master Harold and the Boys plays at the Signature Theatre on Manhattan’s West 42nd Street through December 4, 2016.  For more information and tickets, click here.

My what great insight!

A brilliant, incisive play. The word “relax”reappearing throughout the play, points up the inability to do so for both the mistreated blacks and Hally. Willie, a generally sweet hard working young man, knows no way to discharge his rage at Apartheid other than taking it out indirectly, beating his girlfriend. Young Halley, who,despite his protest to the contrary, gives hints early on of his indoctrination, by the end of the show, becomes in touch with his own misdirected rage at his abusive father, and his preconscious attitudes toward his black workers. Will he be able to reintegrate with the help… Read more »

What a tour de force of human nature! The generosity, the warmth, the pettiness, and the cruelty that make up the human comedy. All of this is magnificently portrayed by these three characters – a must see and so far, the best thing I’ve seen in many months