Max Beckmann was one of the greatest artists of the 20th century.  In a way, his tragic vision was the truest.

The exhibition includes works made during the three years he spent in New York at the end of his life and works that may have been made elsewhere but are in New York collections.  The focus is on paintings — Beckmann was also a draughtsman, printmaker, sculptor and writer — and though not comprehensive it brings to the viewer the full range of Beckmann’s painting. 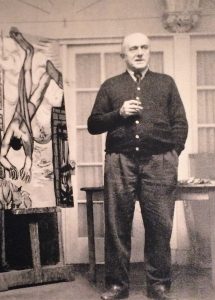 Beckmann (1884-1950), a German painter associated with German Expressionism(though he rejected that association), was essentially squeezed out of Germany by Hitler and the rise of fascism. He was one of those “Cubists, Futurists and Expressionists” who were all, for Hitler, “degenerate artists” and “corrupters of art”.

Marginalized and persecuted in his own country, Beckmann with his wife weathered World War II in a self-imposed exile in Amsterdam and after the war, came to the United States, first to Washington University in St. Louis, that has the distinction of being the first to offer him a post-war opportunity to teach, and then to the Brooklyn Museum in New York which became his favorite city — the first being Berlin in the Weimar period following World War I. 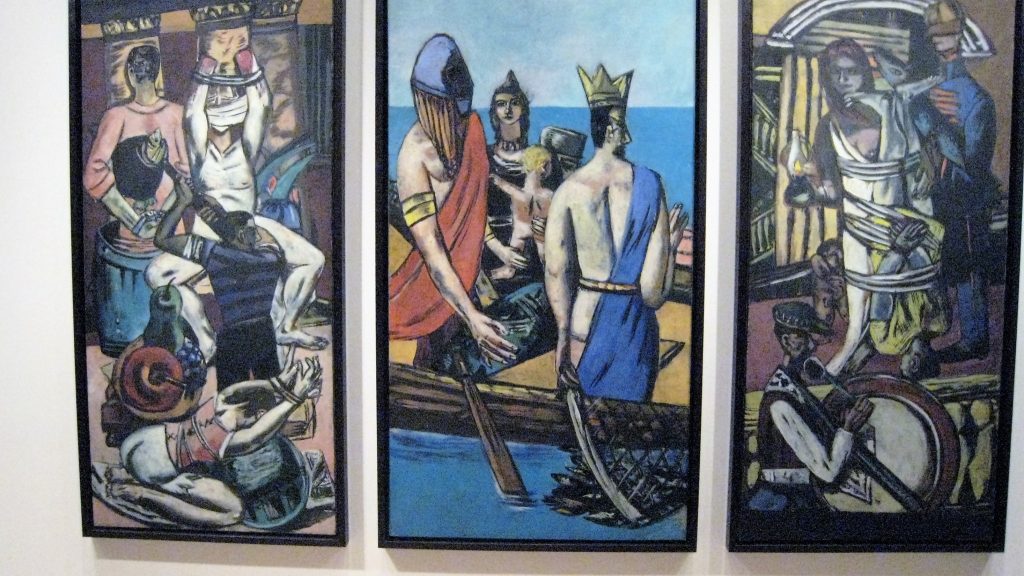 For me, Beckmann’s Triptych, Departure, stands out as a masterpiece.  The two side panels are agonized images, the central one offers a sense of escape.  It seems prophetic, as if the artists understood the persecutions to come and sadistic tortures perpetrated in Nazi concentration camps.  Hitler seized full power in January 1933. 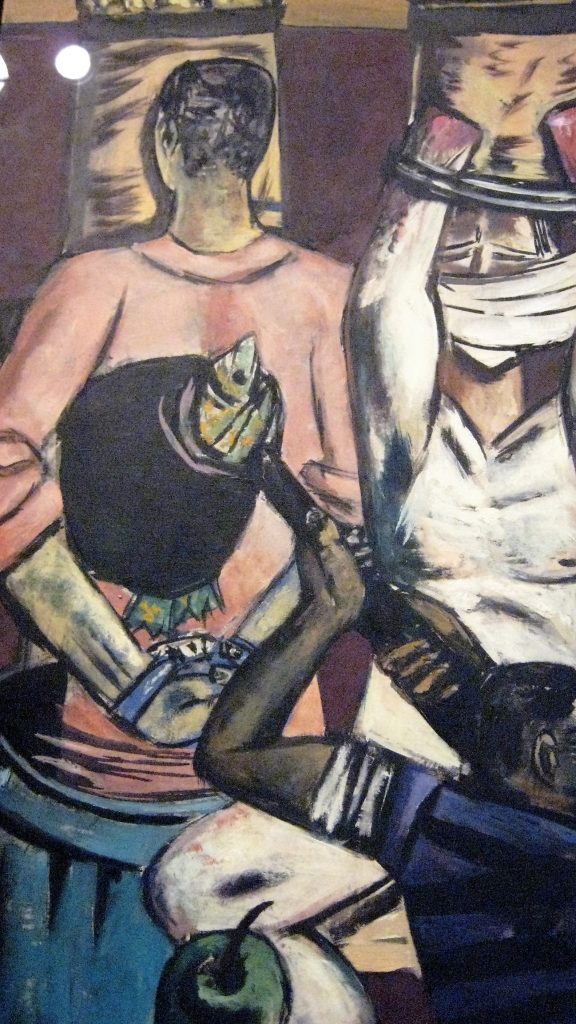 This was during the period Beckmann was working on Departure, and there appears to be a direct reference to the Nazi take-over and totalitarian directing of art:  the hotel bell-boy beating the drum to announce the horror in the lower part of the right-hand panel (above) looks like Hitler’s propaganda minister and Beckmann’s enemy, Joseph Goebbels, charged with purging the “degenerate elements” out of German art and artists.

But the physical mutilations and agonized world view in this and other of Beckmann’s painting, though they look forward, also are rooted significantly in Beckmann’s experiences as a medical orderly during World War I which brought 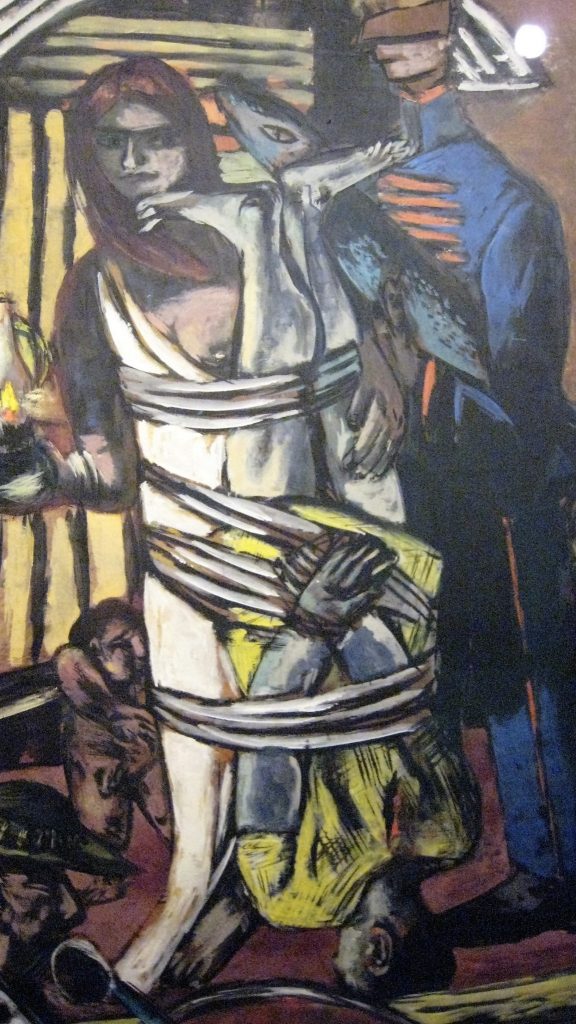 him into direct contact with physical pain and loss of life and limb, an experience so horrific that it led him to a nervous breakdown, today PTSD. It also remodeled his artistic psyche, leading him to abandon his earlier academic naturalism to powerful, unflinching emotional and philosophical expressiveness.  He painted what he’d learned about existence and human nature in the university of violence and war.

Beckmann said that one can see in the right panel of Departure “… the corpse of your memories, of your wrongs, of your failures, the murder everyone commits at some time in his life … “ but the center panel, which he called The Homecoming,” offers a glimpse of hope.  “The King and Queen have freed themselves of the tortures of life … Freedom is the one thing that matters – it is the departure, the new start.” 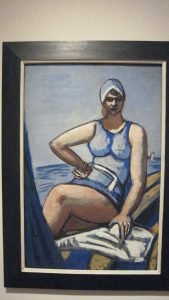 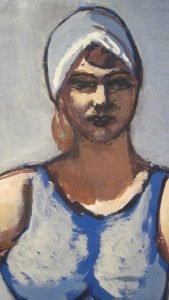 Max Beckmann, Quappi in Blue in a Boat, detail

In an unexpected, and rare contrast, Beckmann’s painting of his wife. Quappi, in a blue bathing suit (left) strikes a delightfully positive mood.

A number of Beckmann’s major self-portraits are in this exhibition and one of the greatest brings with it a poignant story.   Self-Portrait in Blue Jacket (below) was included in an important exhibition of painting in America at the Metropolitan Museum of Art. 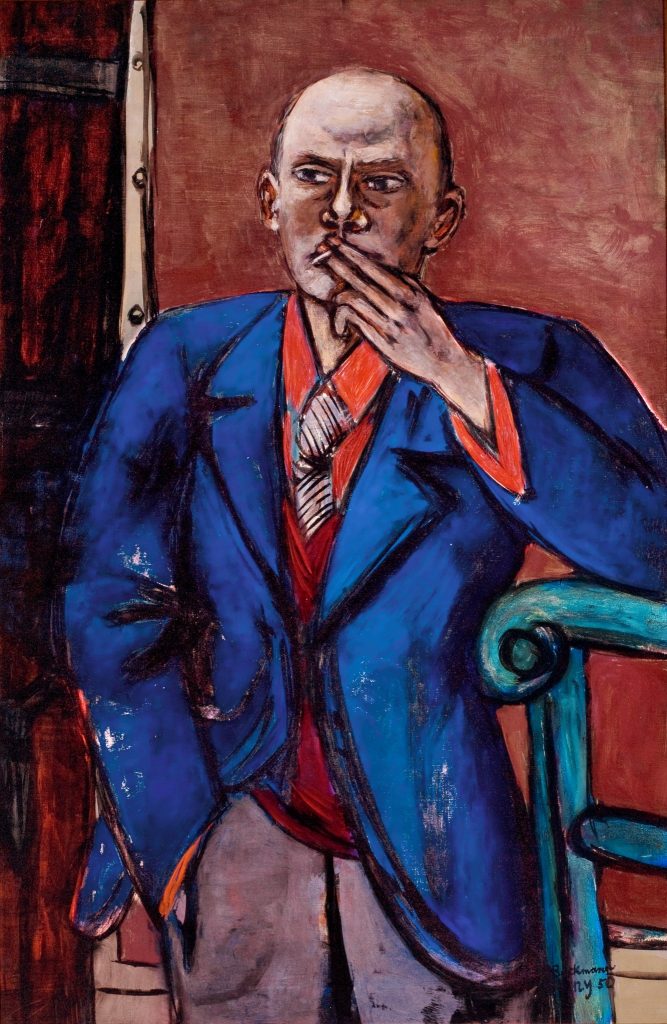 But, as the exhibitions’ curator, Sabine Rewald recounted, he did not attend the opening.  Instead a few days later, he set out walking to the Museum to see his painting and on the way, was struck by a heart attack and died.

Rewald speculated with a trace of amused irony that if Beckmann were alive today, he would say of this exhibition, “Nice little show.” Perhaps she said that because he did so much. Beckmann painted and painted and painted – in Germany during the freedom of the Weimar period, under siege when Hitler took power, under siege again in Holland, occupied by the Germans where he was seen as a foreign enemy, and in the final liberating years in the United States.  There’s nothing little about Max Beckmann in New York – it’s magnificent, and brings us close to the mind, heart and expressive power of this profound artist.

An illustrated and descriptive catalog accompanies the exhibition.

Max Beckmann in New York will be at the Metropolitan Museum, NY, through February 20, 2017.  For more information and tickets, click here. 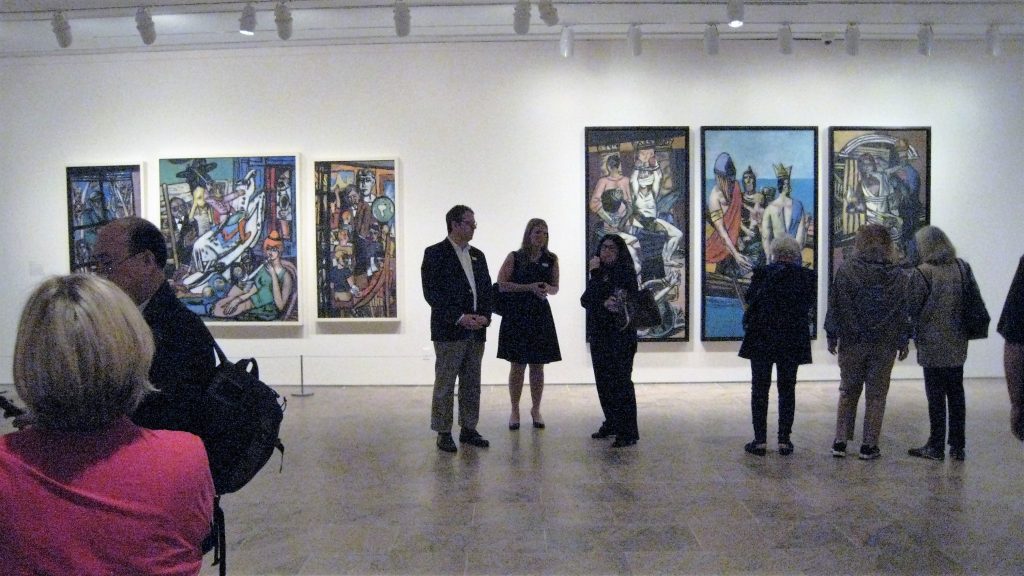 Departure has multiple messages as all great works do. Your observation of the drummer boy as Goebbels adds to the understanding of this painting. Also of interest is the series of self-portraits in the tradition of Rembrandt and others. The inclusion of these and the many other works in the current exhibition gives the viewer an enhanced appreciation beyond Departure of the genius of Beckman. Thank you MMA.