George Orwell, an avowed socialist, arrives in the U.S. at the height of fear of the “Communist menace,” shortly after World War II, to promote Animal Farm (1945) on a book tour.

It never happened but what if?

In these post-war years, when hatred of Communism had been whipped up to a fearful of hysteria, notably by Senator Joseph McCarthy (although the play doesn’t make this clear) how will Orwell, the unabashed “man of the left” make out on a book tour, face to face with the American public?  His nervous publishers have provided him with a chaperone, Carlotta, a young woman whose job is to get him to tone down his socialism, because in those “witch-hunting” days, most Americans made no distinction between Socialism and diabolical Communism, as it was thought of.

It’s such a clear-cut premise it’s surprising that the play doesn’t have more intellectual and dramatic clarity. 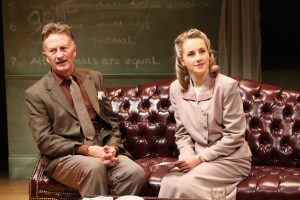 The set is simple, a leather sofa, cocktail table and portable bar in a room representing the several hotels on the book tour (for some reason, the ground floor room with a door to the outdoors isn’t  situated or furnished like a hotel room).  Orwell and Carlotta are seen throughout the play talking and skirmishing in an older man — young pretty girl flirtation in and around the leather sofa, giving the play the look and feel of a romantic sit-com.

Then, in an effective use of the stage, we get glimpses of Orwell talking before 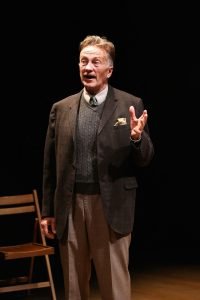 American audiences on his tour.  The spotlight shifts as the author moves stage right and begins speaking to his audiences – to us.  As he announces that he’s a Socialist, he’s immediately heckled for being a Communist (voices call out as if from the audience), because at this time many if not most Americans believed Socialism was synonymous with Communism.  Carlotta, trying to keep him in line, tells the frustrated Orwell he has to understand “the situation” here in America: but what situation is she referring to?

In fact, the play makes only the briefest and notably unspecific reference to what Carlotta calls the “situation,” which in fact refers to the post-war anti-Communist hysteria and witch-hunting, called to this day “McCarthyism.”  What Orwell is up against as a self-proclaimed “man of the left,” and why Carlotta and her publishers are so anxious to keep him on a leash, is not expressed forthrightly within the play.  You have to think over the dates, be aware of what happened in that time period, and absorb it afterwards.

Good gosh:  Animal Farm was published in 1945 and Nineteen Eighty-Four, mentioned as on its way to publication, in 1949 — McCarthyism was rife.  No wonder Orwell didn’t come to America to promote Animal Farm!

And as it happens, the most compelling segment of this play is Orwell giving a dramatic summary of Animal Farm.  Even hearing what’s no more than a plot outline, one thinks, now there’s an author who knew how to write a story!

Jamie Horton is believable, at times touching and at other times monotonous, as the brilliant, weary Orwell, and he manages to look like Orwell too.  Jeanna de Waal brings nuanced wit to her role of Carlotta, the smart, distractingly lovely Vassar graduate determined to have a career in publishing.

Orwell in America provides some explanations for how Orwell came to be the man and writer he was, and how he arrived at the beliefs he held in terms of his background, and his disillusioning experience during the Spanish Civil War.  We do not, however, arrive at the sense of having in some important ways come to know the man or the author, or come to feel we’ve met him.

In an interesting contrast — and currently also at 59E59 Theaters — Hershey Felder, is performing his play Maestro about another well-known cultural figure, Leonard Bernstein, reviewed here below (Maestro is soon to end its run).  Felder gives us the gift of spending time with a living, breathing Bernstein. Though he doesn’t “look like” Bernstein, Felder lets us feel we understand something of how Bernstein came to be as he was and how he came to create.  See it, and you will feel that in a profound way that you’ve met the man.

Who, then, really, was George Orwell?  You don’t find out in this play but you do learn something about his views, some traces of 20th century political and cultural history– and you get a bit of Animal Farm, sketchy outline.  There are better ways.

The Orwell/Blair story is much more than this play. It ignores the significance of all of his works before Animal Farm, which, in this person’s view is one of the most important and influential books of the 20th century. There’s no mention of its translation into so many languages and its continued sales. There are now more than 30 editions in every conceivable format. There are millions of copies in print – yet the play never alludes to this. One small point – the play is theoretically taking place just before the publication of Nineteen Eighty-Four which was in 1949,… Read more »