In a 90 minute fest of music, wit and insight, the multi-talented Hershey Felder sings, talks, and plays the piano through the life and art of Leonard Bernstein. 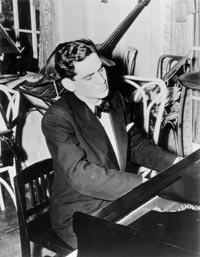 I liked that Felder doesn’t impersonate Bernstein but evokes him, as he switches from narration to being Bernstein, in a tale that takes us from Bernstein’s boyhood to the end of his life.  The importance of Bernstein being Jewish is one strong theme that emerges as we see and hear him escape the expectations of his domineering, Talmud-immersed father, and fight his way through to his great vocation and a life of music.   As you read these written words about MAESTRO, hear music!  Felder plays Bernstein’s biography with tremendous verve and excitement, and sings it with great range and passion. 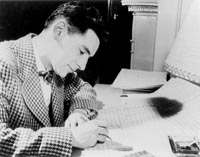 But in what form was that life of music to take?  Pianist?  Composer?  Conductor?  Bernstein, who early on attracted attention playing the piano, wanted to be a composer – the next great American composer after Copeland, with whom he was close – but, assertive as he was, the world opened up to him as a conductor.  From Harvard on (his father proud he was in Harvard but sorry it was in the Music Department!) he was serially taken under the wing of great conductors of the day, Mitropooulos, Reiner and Koussevitzky and nudged, partly through intimate love, toward conducting.

Ultimately he did it all: played, composed, conducted and more – he was an outstanding impresario, took great pride in bringing classical music to a broad audience through television where he commented, taught, and not least of it conducted the nine Beethoven symphonies.  He founded the Symphony Orchestra of Israel.  He composed music in the classical tradition and he composed West Side Story with which he and the other creators – book by Sondheim, choreography by Robbins – took pride in bringing what they felt was a new kind of musical theater to America. 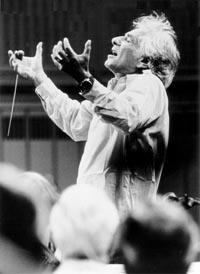 Which brings up another theme.  And irony.  By any account Bernstein was as successful in his chosen field as one can be, earning surpassing recognition, acclaim, fame, influence, and wealth.  But in Felder’s vision. Bernstein never reached the pinnacle of success as a great composer he yearned for. People remember him best by West Side Story and one song in it:  Maria, the musical theme of that song his sound-recognition equivalent of the first chords of Beethoven’s Fifth Symphony – and they don’t quit stand up to Beethoven!  This view that he did not reach the greatness as a composer he sought is evidently one that nagged at Bernstein as his own, independent of the opinion of others one way or the other.  Though I knew that Bernstein had composed for Candide, Peter Pan, and other shows, I now know that he wrote the music for On The Waterfront — now I have to see that great movie — yet again!

Felder creates this musical biography with a grand piano and modest-sized stage, and with the help of large photograph projections, wonderful close-ups for the most part of those who figured importantly in Bernstein’s, including his wife, Felicia, and of Bernstein himself, from the remarkably handsome youthful impresario to the end of his life.

There are a few blanks.  We don’t hear about his siblings, or much about his mother.  And the blank that caught my breath as one of Bernstein’s great triumphs, in 1944, was being described:  why wasn’t he in the war?  I now know that he was exempted because of chronic asthma but one needed to hear more about it:  how did World War II affect Bernstein? – the war isn’t so much as mentioned.

Felder goes beyond his own musical virtuosity in bringing us an intelligent and thoughtful interpretation of a major figure in music – in whichever mode! – of the 20th Century.  In MAESTRO the ideas are rich and the music compelling and joyous.

This a theatrical biography which tells much but not all. The rationale concerning Wagner was somewhat disingenuous but I found the entire production informative and enriching and above all a wonderful evening at the theater. One learns more about a very complex creative person – go see and hear it.