… they never promised us a “real” garden … 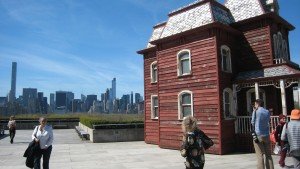 When is a house not a house?  When it’s a Transitional Object (PsychoBarn) by Cornelia Parker, site specific installation for summer 2016, Roof Garden of the Metropolitan Museum

When I first saw photos of Cornelia Parker’s Transitional Object in a newspaper, I thought oh no, why do they have to stick an eyesore on the museum’s lovely roof garden.  When I went to see it actually I found that it’s an intriguing eyesore, not what I’d like best to see on the roof but it does get you thinking. 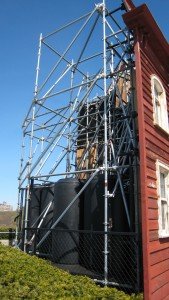 As you step from the elevator outside to the roof, you see in the far corner something like a house — but no, that can’t really be a house.  First off, it’s not being glimpsed along the road on a drive in the country – it’s on the roof of an art museum (alert there), surrounded by the Central Park and the skyscrapers of Manhattan.  And, if you had any thoughts this was some quaint touch for the summer roof garden, you fast find out from moving around it that the façade is a cover for a web of scaffolding, pipes and water tanks.  The water tanks are practical as well as expressive: they are ballast to keep the structure in place in high winds. Adding to Transitional Object’s disquieting effect, the shiny mansard roof looks inconsistent with the heavily weathered siding which, we learn, came from an old red barn in up-state New York. 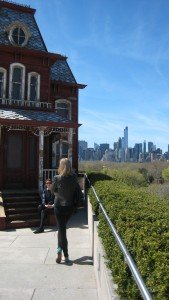 Artist Cornelia Parker sitting on the steps and chatting with a visitor.

Many associations and philosophical ideas are embedded in Transitional Object, as the artist, in person and in abundant accompanying written materials is quick to tell you.  As a house facade with an insubstantial and old fashioned look, it recalls a movie set and it was in fact designed after the house in Alfred Hitchcock’s film Psycho, which like many movie sets is a façade with struts holding it up and no real back to it.  Hitchcock designed the house in Psycho after one in a well known work of art, Edward Hopper’s painting, House by the Railroad in the Museum of Modern Art, NYC.   “Psycho House” looms so large in the popular imagination that a version of it is a tourist attraction at Universal Studios but, for the sake of visitors, Universal built it not just a façade but a complete structure (click here for a terrific series of photos about “the house”).  So we have a kind of conversation across culture, in which four of the “same” house, all differently constructed, all have something to say.  There’s the Hopper painting, the movie set in Psycho, the intact Psycho House at Universal Studios, and now Transitional Object — to which we can add a fifth, the archetypal old house, haunted or otherwise, of the rural and small town American landscape, that rests in many of our memories and imaginations.

And then there are reflections … 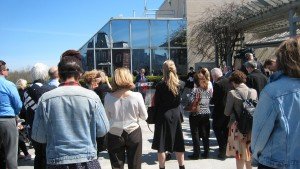 Which is the “real” house?  In tossing into our thoughts the house with a history, Transitional Object shakes us up to think about what is really “real.”  That philosophical questions underlies Transitional Object, moving it beyond amusing associations to a work with depth of meaning.

The artist is also interested in the view of the psychoanalyst, D. W. Winnicott, and it’s from his theories that she drew her title.  For Winnicott, a “transitional object” refers to objects children seize upon, such security blankets and teddy bears, to provide comfort and enabling their developing independence from their mothers. 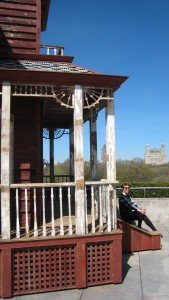 As Parker commented, Norman Bates in Hitchcock’s Psycho failed to make that transition and so, taking on the persona of his own dead mother, he became a murderer of women.  In this connection, the artist feels that Transitional Object, as houses in general, take on a symbolism referring to the womb.  Visually, the array of pipes and water tanks in the back do suggest an external view of the inner parts of the human body, the things that we don’t ordinarily see, that we shouldn’t see, but are always with us.  As a rich work of conceptual art, Transitional Object is loaded with ideas, more than I’ve said, perhaps even more than the artist has thought, some you may discover yourself.

And speaking of the living-dead —  the stately decrepit structure with its guts exposed brings to mind Salvador Dali’s surrealist painting, Burning Giraffe.  Have a look also at Dali’s Spectre of Sex Appeal.  But Dali’s work is small, Burning Giraffe is 13.8 in x 10.6 in, and hangs on a wall, and through that alone is less in your face.  Although not literally a public space, the roof garden of the Metropolitan Museum of Art functions much like a public space.

My preference for this outdoor summertime space is for a work of art that matches and enriches the loveliness of the setting, one that offers some of those emotions and sensations associated with “real” gardens  (I know, I know, What is Real anyhow?).  My all-time favorite — so far — is Tomas Saraceno’s Cloud City, on the roof summer of 2012.  I like the installations that, like Cloud City, engage visitors physically while, with Transitional Object, we mainly look.  To me, it kind of spoils the view … but, thinking about something rich and challenging is a worthy activity.  This is a good place to go with a date – lots to talk about!  And refreshments are available on the roof too.

Cornelia Parker’s site specific installation Transitional Object (PsychoBarn) will be on the roof of the Metropolitan Museum through October 31, 2016.  For more information about the work, and about visiting the museum, click here.

I’ve been thinking a lot about this title that the artist has used, and as a psychologist, I am very familiar with Winnicott’s brilliant work. Im afraid it is misnamed. A transitional object is something which recalls an earlier comfort, like the proverbial “blankee”. I suppose this installation could be seen as a transitional object for the viewer, but that really strays from the original conception.
Nonetheless, thanking Dr. Korshak for her continuing brilliant reviews which are generally more trustworthy and insightful than many of the popular critics.
Nan

Check out the great view of this looking upward from the roadway in the park. In some ways this is the more interesting view – it’s such a strange sight to see a Victorian house the roof of a New York museum. This is not worst nor best of the roof exhibitions. It will be a pleasant place to eat a sandwich outdoors during the summer and look at this façade against the solid cubic structure of the surrounding cityscape. No more – no less – just enjoy, Freud not withstanding!