noted on 11/17/16:  The Secret Lives of Edward Gory is returning for a run at the Sheen Arts Center.  For more information and tickets for this current run, click here.

The Secret Lives of Edward Gorey – and Gorey was highly reclusive – moves us as if in free-form through Gorey’s life.  That’s just right – a perfect analogy for the sense of free association of Gorey’s drawings and writings.  What a wild thought!  one thinks encountering Gorey.  What crazy, touching juxtapositions!  And of course, underlying the unlooked-for leaps in Gorey’s art is hard work and discipline – the same goes for this fine play. 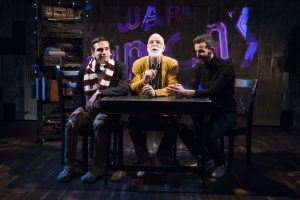 Three actors, perfectly cast and intensely individualized, play Gorey at three different ages:  Phil Gillen (Gorey 3) is the optimistic, skittish Harvard guy in his mid-twenties and in terms of cultural epochs, during the 1950’s, Aidan Sank (Gorey 2) is a more sardonic Gorey ten years later in the ‘60’s, and Andrew Dawson (Gorey 1) in perhaps the most magnificent of the three fine interpretations of the artist is Gorey, “fragile and powerful,” during the 90’s when the artist was in his mid-seventies (he died in 2000 at age 75).  I’ve seen plays before with actors together on stage representing different ages of a character’s life but I’ve never see a better interweaving of different times of a person’s life than here.

Interweaving is the essence of The Secret Lives of Edward Gorey, a dense fabric of Gorey’s life composed of threads time, friends, passions, compulsions, creativity, and incidents large and small.

Fact and fiction are also woven in this play – Russ calls it “a fantasy memoir” – that draws upon interviews, personal notes, and letters found in Gorey’s Cape Cod house along with over 1,000 objects (he was a hoarder) inventoried at his death.

We see Gorey’s life – not in sequence but we catch on.  Gorey 2 recounts an incident when he was eight when he “begged mother to dress me up as Emily Bronte for Halloween.”  “And she did!” Gorey 1 puts in though he was “mistaken for Emily Dickinson.”  We hear of his time in and after Harvard and friendships with several writers including his roommate Frank O’Hara.  Later comes a scattered, poetic evocation of O’Hara’s charismatic personality, next to whom “I – I felt like a piece of, of, of driftwood – “ of O’Hara’s ambiguous accidental death on Fire Island and of Gorey’s missing him to the end of his days. 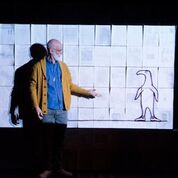 Through witty projections, we’re on hand for Gorey’s invention of the penguin in sneakers, his alter ego, named Doubt.  We hear of Gorey’s early, discouraging peddling of his portfolio around New York City and his many rejections – including a rejection letter from The New Yorker (“The people in your pictures are too strange and the ideas, we think, are not funny”), subsequent recognition, and his meeting and passion for George Balanchine that led him to ballet:   Gorey 2 says he attended “Eighty-four Swan Lakes. Sixty-three Firebirds. Fifty-seven Western Symphonies. I even sat through 176 consecutive performances of The Nutcracker. (Pained.) I mean, The Nutcracker.”

The talented congruence between Travis Russ’s play and Gorey’s creative expression is fascinating – Russ catches Gorey’s voice.  I feel, though, that the play needs more dramatic tension.  There’s wry wit, charm, insight, gossip, illumination and mystery – but no suspense.  One’s never concerned for the character, only interested in him, so after a time the cleverness gets a little tedious.

The production is visually effective with the set by Russ and Carl Vorwerk incorporating as a backdrop an appealing miscellany of Gorey’s notes and written ideas: it’s nothing short of beautiful that the audience is invited to have a close look at these before and after the performance. One thing is missing:  Gorey’s drawings.   We see none of them, except the figure of Doubt.  This is a real loss.  If you did not know Gorey before you attended a performance, you’d have a sense of his writing style by the end of it, but not a clue about the drawings.

Still, the play creates a mind expanding full world – Gorey’s world – and I feel glad and lucky to have spent time in that imaginative place.

GOREY The Secret Lives of Edward Gorey is produced by LIFE JACKET Theatre Company and plays at HERE Theatre in Manhattan’s Greenwich Village through May 22, 2016.  For more information and tickets, click here.  (note 11/2016:  for information and tickets for the current production of The Secret Lives of Edward Gorey, click here.

As a Gorey enthusiast, I greatly appreciated your review of this play. Gorey has made and still continues to make a very real contribution to our culture. Although the New Yorker rejected him, the New York Review of Books still keeps him alive by publishing many of his excellent drawings. I’m looking forward to seeing this three-person biography of one of my most favorite people – Edward Gorey.