… from lofty gods to lusty satyrs … 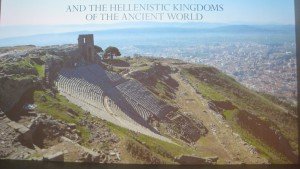 Panorama of the ancient theater at Pergamon and surrounding terrain, exhibition poster. Those steps were too steep for me — didn’t have the nerve!

Hellenistic Art covers huge sweep of three centuries from the death of Alexander to that of Cleopatra (323 – 30 BC) and in geography.  Through the conquests of Alexander the Great and their aftermaths, Greek culture spread from the Gibraltar to India, casting a defining influence everywhere it went, while absorbing new ideas.   Remarkably, this magnificent exhibit of Hellenistic art, with a focus on the city of Pergamon, is truly large and varied enough to give a fair idea of the whole, and to offer many examples of stunningly beautiful and profound works.

The Attalid kings who ruled over much of Asia Minor were in love with classical Athenian culture and — more politically – made use of the prestige and legitimacy the classical forms in art and architecture offered their dynasty.  They endowed their capital, Pergamon (today’s Bergama, in Turkey), with everything needed for civilized life, paying lavishly – but then they were very rich – for large-scale works with inspiring civic and religious messages, expressed through mythic metaphors.   Among these, and created at the height of their power and wealth, is the Great Altar of Pergamon and it’s just short of amazing that major sections of the sculpture from this altar are on exhibition here. 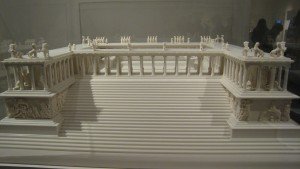 Scale model of the Great Altar of Pergamon. 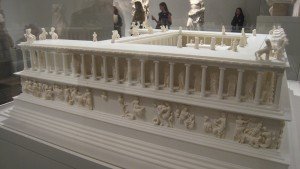 Scale model, from the side, of the Great Altar of Pergamon 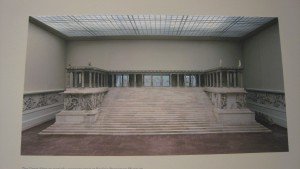 The scale model of the altar in this exhibition gives some idea of its composition.  The altar was remarkably dense with great sculptures in very high relief:  it’s often said that the designers had to dig deep into mythology just to find enough gods and demigods to fill those long sides – but then, they had the library at Pergamon, another outstanding Attalid achievement, for research!

The Great Altar is not in Turkey, where you might expect it.  It’s installed in the Pergamon Museum in Berlin, where you can see it – indoors —  in Photo.  The museum in Berlin is currently closed for renovation, which is a reason so many great sculptures from Pergamon were available for this Metropolitan Museum exhibition. 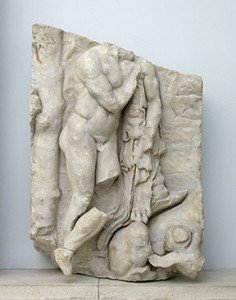 Herakles Finding The Infant Telephos Suckled by a Lioness, from the Great Altar of Pergamon, height 42 1/2 in., Antikensammlung, Staatliche Museen zu Berlin. 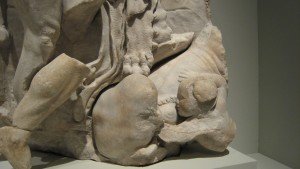 The infant Telephos at the lioness’ breast, detail from the Telephos frieze.

On the ends of the Great Altar are narrative moments of particular political importance to Asia Minor and the Attalids such as the relief of Telephos, an illegitimate son of Herakles who grew to become a great king in Asia Minor:  a rival king, fearful of Telephos’ potential power, exposed the infant on a wild mountain but, seen in this relief, Herakles enabled his son to live by arranging for a lioness (here) to suckle him, the lion (as in Weary Herakles, just below) being Herakles’ particular animal.  You can also see that Herakles in this stone relief is derived from the sculptor Lysippos’ statue of Weary Herakles (just below).

Among the 265 (!) objects in this exhibit, some of the most exquisite experiences are among the small-scale works, often made for the private enjoyment of wealthy patrons.  Some of these are originals, and others are later copies, often scaled down, of earlier great works. 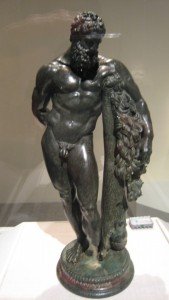 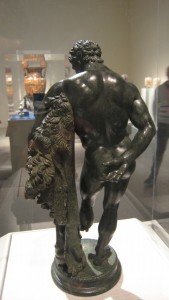 Weary Herakles (Resting Herakles) from the back.

It’s well worth taking a close look the Weary Herakles (Resting Herakles), a copy of a famous work by the sculptor Lysippos.  Although no works from the actual hand of Lysippos have survived, sculptures such as this give real insight into the brilliance of his thinking that went in to making him so outstanding that Alexander the Great thought he was the only sculptor worthy of making his (Alexander’s) portrait.  Herakles, in a parable of the life work of all mortals, has accomplished his many difficult labors and now, naturally enough he’s weary.  After all, he was only human – later he became divine but not until he’d done all the work.   The club of weary Herakles, draped in the skin of the lion he killed, has been repurposed:  instead of fighting with it, now he’s leaning on it, his powerful body, like the limp lion’s skin, is giving in to gravity’s pull.

In an awkward, and therefore notably purposeful gesture (purposeful for Herakles and the sculptor), Herakles twists his right arm all the way to the back so it’s as far out-of-the-way of action as it can get.  And if that were not enough, he rests his hand palm up on his buttock, a gesture that puts his hand into inactive alignment with the arm, (try it out and see how it feels).  It’s his gesture of refusal.  The left arm is nudged out of gear as well by the club digging in to the arm pit, nudging the arm away from his body, so that both his arms and hands are muscularly disengaged.

Weary Herakles has even arranged the lion skin to cushion the top of the club under his armpit –good idea, the club won’t dig in,  Herakles has reached the point where he’s looking for comfort.   With true genius, the sculptor thought through this work in these and other ways.   No wonder it was one of the most popular works of antiquity – everyone wanted a copy (even for the Telephos frieze, above right) –and this fine small bronze is closer than many to the original. 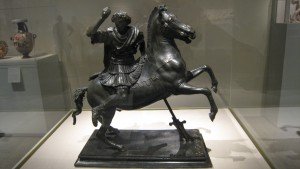 We meet up with Alexander the Great in this small bronze that shows him riding his horse, Bucephalos, in battle, and about to strike a blow, the sword hilt is still in his right hand, and the reigns of the horse would likely have been rendered in bronze strips. 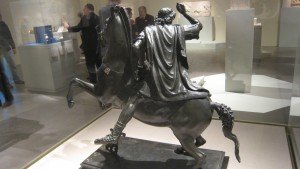 Alexander The Great Astride Bucephalos, other view.

The young King’s hair is loosely tousled, a characteristic attribute in his portraiture developed surely with Alexander’s assent to express the personality he wanted to project:  his divinely inspired and passionate nature.  His hair springs out and away from the Macedonian diadem that encircles his head – speculatively one can wonder if that’s perhaps a visual metaphor expressing the thrust of his empire way beyond the borders of his Macedonian homeland — admittedly and interpretive stretch!  The slim, lithe body forms also show the influence of Lysippos, Alexander’s personal sculptor (Weary Herakles above). 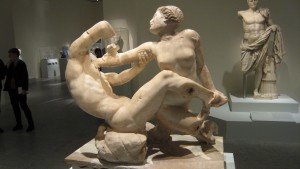 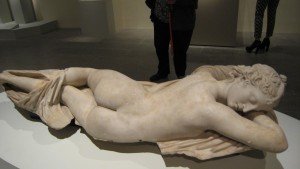 explore through them the fullness of human nature.  Satyrs make visible and act out the animalistic vitality and lust within human beings, bringing us closer to ourselves, without the anxiety of rupturing social codes.  After all, they’re not really us, right?!  Hermaphrodites  are hybrids of sort, too, part female part male – the word combining the names of the god Hermes and the goddess Aphrodite. 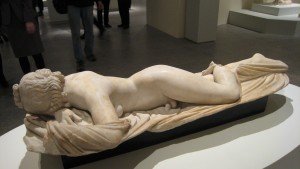 Though inviting prurient interest (when I visited, this hermaphrodite was pushed tight against a wall in the Terme Museum, making it impossible to see the front of it) hermaphrodites have significant religious meaning as images of fertility: they are powerful all-fertile figures. 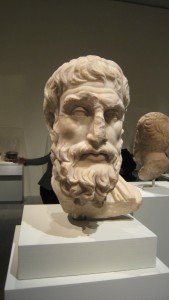 Portrait Head of the philosopher Epikouros, Roman copy after a Hellenistic original of the first half of the 3rd century B.C., Pentelic marble, height approximately 16 in. The Metropolitan Museum of Art, NY

You can ponder the faces of great figures in history and culture, in portraits in this exhibit, such as the philosopher Epikouros, and poets Homer and Menander.  You can even study the faces of those Attalid kings who were patrons of the Pergamon’s Great Altar, often styling themselves after Alexander the Great with his wild locks and inspired gaze. 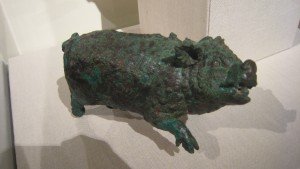 And you can enjoy charming genre pieces such as this Sow at Bay  photo, a rough-looking creature, probably part of a sculptural narrative, bronze, the eyes preciously inlaid with silver to heighten the realism.

This bringing together of so many important Hellenistic works, including actual pieces from the Great Altar, makes this a once-in-a-lifetime exhibition, not to be missed.  Many of the works have never been shown before outside of their home museums, and with a new renovation underway in the Pergamon Museum in Berlin, it’s highly unlikely that portions of the Great Altar will be removed again (unless in the future Turkey somehow successfully claims its rights to it).  The exhibition is accompanied by a thorough, beautifully illustrated catalog. 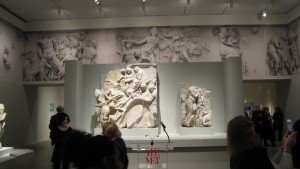 In the foreground two sections of the Telephos Frieze from the Great Altar of Pergamon, 2nd century B.C.,, with photographs of the frieze of Gods Fighting The Giants in the upper background.

Pergamon and the Hellenistic Kingdoms of the Ancient World runs from April 18 – July 17, 2016.  For more information on the exhibit, its curators, the catalog, and on visiting the museum, click here.

True, I’m keen on the wild hair of Alexander reaching outside the Macedonian diadem … THANKS for noticing, writing … I appreciate it greatly!

thank you, Yvonne, for sharing your knowledge (the origin of hermaphrodite), analysis (the genius of Lysippos) and even your interpretations (the wild hair of Alexander reaching outside the boundaries of the diadem)…unforgettable…!!! this is off broadway!

Nice descriptions and analysis of these great works. It sure is a once in a life time. We’re fortunate in New York to be able to experience this, even a wealthy connoisseur would never be able to view all of these exceptional works, especially in the historic continuity the museum presents them in. Be prepared to spend many hours absorbing this exposition of some of the great things human beings can do.