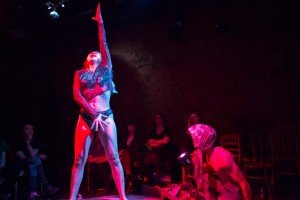 We’re in an unnamed place in Adam Rapp’s hillbilly country – the southern accents, by the way, are authentic and appealing — and at true center is a mound of dirt.  In the first focus of the play, an actor digs in, lies in, messes around at length with the pile of dirt with druggy flowers and bits of junk like old foil chewing gum wrappers – this is a play about life’s fundamental elements, its physicality, the bones beneath the skin, about the closeness of life and death, of creation and dirt.

An impoverished clan of disaffected misfits lives here near the river, lorded over by Monty,  a vibrant Xanthe Paige,  who rules by force of personality and makes money by collecting blood to sell from denizens of this down and out place.  At the bottom of the hierarchy of brutality is sixteen-year old Tana (Kate Thulin), the most vulnerable, constantly threatened and visibly battered — that’s Tana’s blood on the refrigerator (this play is not for the squeamish).  As an expression of her vulnerability, she’s naked and trying to cover herself when she first comes on stage.

Is there any way out for her from this life of degradation?  They’re all isolated, stuck in place by poverty, ignorance, listlessness, locked in a kind of rooted repetition of oppressor and victim, as Dothan (William Apps), a veteran of Afghanistan and Monty’s boyfriend is frozen in a mental prison of PTSD.

But Debo (Maki Borden) loves Tana.  A young man from the outside, he comes from a state that does have a name, Illinois, and from a family that does real work.  Tana speaks with him on a cell phone he gives her, arousing envy that increases the brutality of her down-and-out clan.   But perhaps there’s a life beyond the confines of this hopeless place.   Perhaps if Tana could somehow manage to cross the fearsome river … 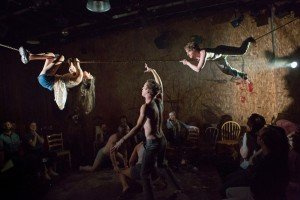 Or, in this play of murky ambiguities of time, is Tana dead before the play begins?  That’s what The Man (Jack Ellis), who partly narrates Tana’s story, implies.  Is it too late?  Is she already the victim of the wolf in the river?  The girl of whom nothing was found but three teeth?

The play draws strength from the symbolic resonances it finds in physical things.  Like the silver foil among the junk in the dirt pile, Tana is a throw away girl but, with the nuanced simplicity and inner strength of Kate Thulin’s characterization, she gleams.  The old style refrigerator that sits off to the side, grimed, smeared with blood, a character in itself, is an archetype of dilapidated lives.

The language of Wolf In The River is wildly lyrical and grounded in specifics — an unusual combination, and you never doubt that the people speak the way Rapp has written for them.   The poetry reaches a peak in a thrilling monolog about bones, delivered like a patter aria with virtuoso speed and totally unsentimental passion by Jack Ellis.  He enumerates all the bones in the human body, the bones beneath the skin, all at the same time apparent in Ellis’s super slim articulated body, and he makes sure we feel and know we all share those bones, from toes to skull.

The bones monolog is in and of itself is reason to see Wolf In The River – though there’s much more.  As a narrator (with occasional other roles to play), Ellis’s stage authority is an engine that drives the play forward.

For all of the dark overtones, Rapp gives us a “perfect day” when Tana and Debo first meet, memorable for its staging, development and acting.  Tana is sunbathing on a dilapidated dock, surrounded by the audience seated in a circle of chairs, when Debo, on the outside of the audience, comes by in his boat.  She responds to the young man’s attentions while he poles his boat behind the audience, unwilling to leave or break the magic circle of love (not the only magic circle in this play).  The boat that isn’t there is so convincing it’s  kind of an enchantment, and Debo’s smile of pleasure is unchanging, conveying his joy and determination to love.

The outstanding cast is drawn from The Bats, The Flea’s resident company who, the program states, also contributed to the text.  Arnulfo Maldonado’s stunning scenic design covers the walls with dense overlays of posters and notices, scrawls and graffiti that convey the processes and ambiguities of time and unite audience and performers.  A powerful script, over-the-top imaginative staging, dance movement and singing — Wolf In The River provides a psychedelic, if grungy, wholeness and encounter with essential truth.

Wolf In The River plays at The Flea Theater in Manhattan’s Tribeca through June 6, 2016.  For more information and tickets, click here.

For a review of Adam Rapp’s The Purple Lights of Joppa Illinois, click here.

I agree, I’ve seen Wolf In the River here at the Flea Theatre. Love the intimacy of the small theatre.

I too saw this rather extraordinary and marvelous production. It is well within the tradition of the Flea Theater which produced several interactive similar productions. The intensity of the script, the music, the acting, and the settings make this one of the more memorable evenings of theater. Not everybody’s cup of tea – but if you value an aesthetic, philosophical and emotional experience, this is the place for you. You mentioned the scene of her on the pier with the suitor circling – this was really, to me, one of the great scenes of all theater – hope that many… Read more »

Agreed — The Flea has been in the forefront not just of immersive theater, but in creating a special kind of happy bond, sense of collaboration, between the performers and the audience. I wondered if that would continue since The Flea has new artistic direction and I’m glad (judging from Wolf In The River) it has. It’s kind of nice, isn’t it, when the actors offer you a chocolate brownie at the end! Yvonne