… but you won’t read this in the comic books …

Ghost in the Cottonwoods is a tale of family sin and retribution — it sure isn’t Aeschylus or O’Neil but it’s in that tradition.  It’s told with a seeming acceptance of violence, as if that’s how life is, and directed at such a rollicking pace that the terrible things we see on stage seem hilarious — for awhile.

The story, about hillbillies, unfolds in an isolated cabin.  A mother and her gangling son, Pointer (think Li’l Abner), are awaiting the older brother, Jeff, who’s broken out of prison — it takes awhile to learn what sent him there but when we do it’s, of course, a shocker.  Dad’s dead.  Mother doesn’t know how to read, doesn’t much leave the house, but has a lot of spirit, smokes a pipe like Mammy Yokum, makes her own moonshine, is seductive with her son, and when, after a flirtatious idyll with a stranger who’s come to the house, she realizes he’s a bounty hunter after Jeff, she does pretty well at polishing him off.

Bones have a way of slipping, the mother muses, not having seen her older son for six years, what will Jeff look like now?  How will he have changed?  We find out, and it isn’t pretty.  Gradually laughter fades and a kind of wonder about the capacities of humans to harm one another takes over.  Countering evil is the teen-age romance between Pointer and Shirley.  She’s intelligent, Pointer tells his mother, who’s afraid he’ll flee to the big city with his girlfriend to do musical rap, she taught me to read.

Ghost in the Cottonwoods is a play of brutality and love.  Its bright staccato texture and use of hillbilly cliches give it a comic strip appeal;  I wasn’t surprised to learn that the author has written a graphic novel.  And it draws on visual sensationalism to keep the audience interested — e.g., not just the one requisite nude but three, and that’s the least of it.  But the play gains depth through Pointer and Judy, beautifully played by Nick Lawson and Mandy Nicole Moore, who provide a counterpoint to the brutality.  We worry about them.  Given the conflicts set for them, will their motivations for richer lives take them beyond this narrow, cruel world?  Will their love pass the test?  It’s not the first time these questions have been asked, but Ghosts in the Cottonwoods gives an update on the answers in a refreshing contemporary mode.

Ghosts in the Cottonwoods plays at Theatre 80 St. Marks in NYC East Village through December 6th. THE RUN HAS BEEN EXTENDED AND PERFORMANCES WILL CONTINUE THROUGH DECEMBER 12. 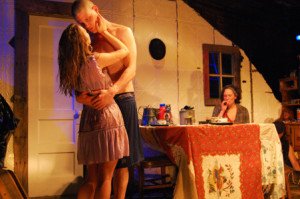 I hadn’t thought this genre existed, but this play is essentially horror theatre. It’s a gratuitous, disgusting piece of work that relies heavily on cheap shock value and perpetuates the worst possible stereotypes about hillbilly culture. If you’re into prolonged rape scenes, this play’s for you.

You have articulated the positive message in this play which uses the veneer of the primitive to tell the story. One wishes that more of the dialog would have been articulated so that the audience could hear and understand the words. Almost all of Nick Lawson’s Pointer Scully’s rapping was unintelligible.