… five good performers in search of a play …

I loved the idea of this show which is subtitled An Epic Tale of Fictional Lives Intertwined with 90-year-old Landmark Theater New York City Center, a building that’s played such a rich role in the life and particularly the performing arts life on New York City.  And the idea that the word “architecture” would have meaning both in terms of the building and in terms of individual lives sounded exciting.

Before the play begins, a portion of The Sheik, the silent film of 1921 with
Rudolph Valentino and Agnes Ayres is projected repetitively — fun to watch but … why? Perhaps it was referencing that City Center was first built in 1923 in a Moorish style for the Shriners who called it the Mecca Temple, although Valentino’s seduction of Ayres seemed worlds away from the mystic goings-on of the all-male Shriner organization.  Like most of what followed in fast-moving, quick changes, it gave the sense that it was there just because somebody wanted it there, not for any driving artistic reason.

From the film the play moves to an intended unifying premise:  Siempre Norteada, played by Claudia Acosta, a writer of Mexican descent from Texas announces that she has won a commission to write this play about City Center but, she tells us, she’s only been in NYC a short time, and doesn’t know where to begin or what to write.  Oh oh.  And sure enough, from here, the play dissolves into a series of episodes of lives in which for the most part the relationship to City Center or to one another is largely incidental. 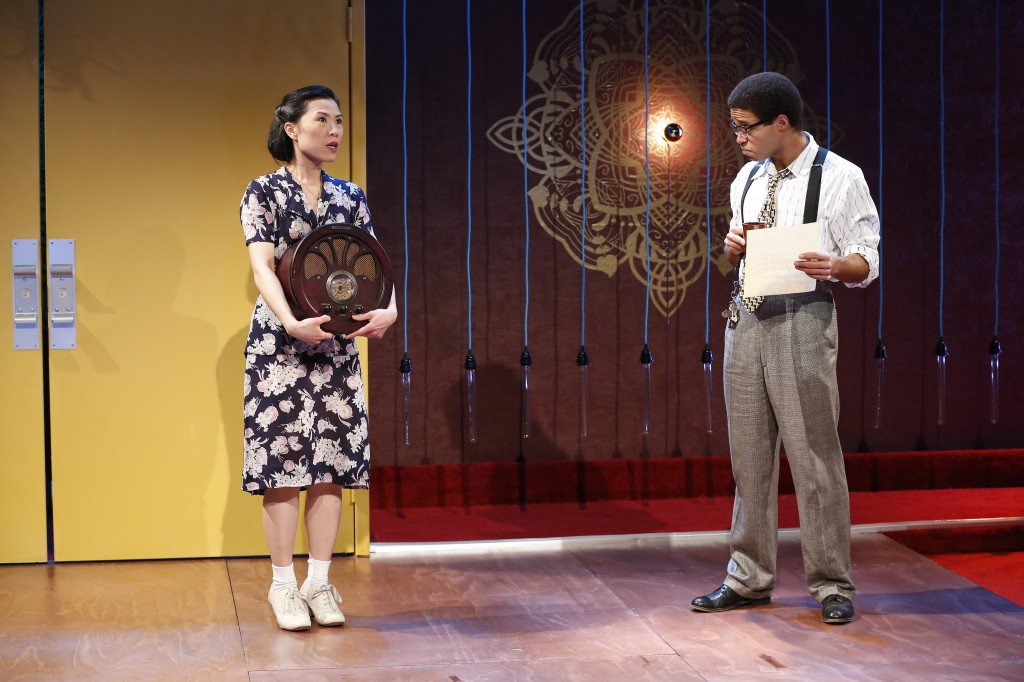 The vignettes are very well performed by Claudia Acosta, Vanessa Kai, Christopher Livingston, Jon Norman Schneider, and Danielle Skraastad who make impressive switches from one type of character to another.   Vanessa Kai, for instance, moves from conveying a  deferent Japanese housewife through a stoop in the shoulders and mask-like facial control to an all-out street kid from the wild side.  In her Japanese woman mode, she gets a job sweeping up at City Center but that’s incidental — in terms of her own life, she could have been sweeping anywhere.

One episode is particularly moving — a real highlight.  Christopher Livingston plays a Black street kid hanging around outside of City Center, chalking on the tall doors the names of the great composers whose music filters from inside — Bellini, Puccini and — with a wonderful flourish of the accent  mark — Dvorák!   It’s all in graffiti style but perfectly spelled and known, a beautiful, signifying tension.  The dramatization of the outsider yearning for what is within the doors that keep out as well as let in is powerful. 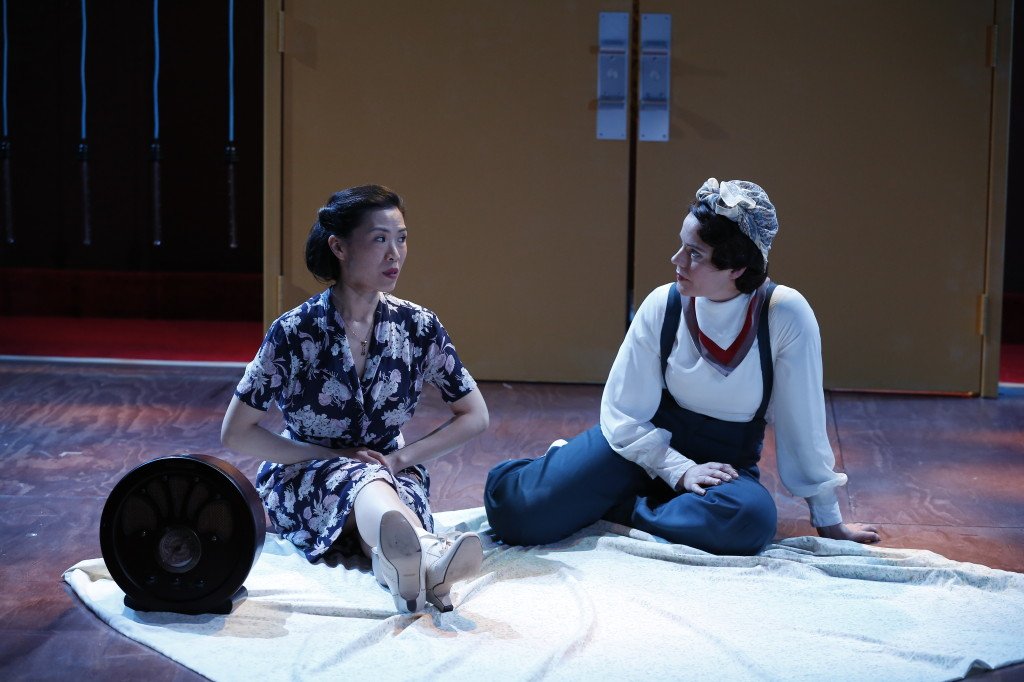 The lives touched on are only glimpsed, however, and are mainly disconnected one from another, so the promise of locating some kind of structure in movement through life  — the  “architecture of becoming” — is not fulfilled.  And the connections between the individuals to City Center are so loose that the play lacks its own architecture.  Siempre Norteada, who tells us she doesn’t know how to begin her play also, as she says, doesn’t have an ending for it.  The playwright (there are actually 5 of them, maybe that’s part of the problem) has given sketches of a number of lives in NYC, some interesting, some less so.  There are some touching moments but the Center does not hold.

The Architecture of Becoming plays at New York City Center on West 55th Street in Manhattan through March 23, 2014.

I see your point but in my view the potential lies with character of the piece to overcome or not any expectations … there are always expectations (and mine weren’t all that precise either.) What you describe in your comment is worthy — for me it was best developed in the episode I focused on in my review. And, within that, I continue to think that accent mark on Dvorak (can’t pull up an accent mark here) was a stunner — I’ve been thinking where in theater, or in other literature, has an accent mark been used with such significative… Read more »

… a little windy but … interesting. Thanks for keeping me posted!

Thanks for the dialog! Here is another opinion of the piece. “As “The Architecture of Becoming” is a production of Women’s Project Theater, the feminist roots are seen. It is not only a women’s drama.. At the core of the play is a quest for identity, and the need for stories to be one’s own. If there is a larger, uplifting message about women in the play, it is about longevity. As architecture shifts and time changes, the stories and the people are always there.”
http://www.theaterpizzazz.com/looking-back-looking-forward-architecture-becoming/

I meant the expectations of the story being about the history of the venue rather or not lending to the relationship of the place to the artists so I was only thinking that didn’t allow a positive experience with a non-linear story. It was a true treat to work on and exciting that the stories told focused on the marginalized people on the fringes of art and culture. From the beatboxer to the playwright to Tomomi to the Girl in love with a black man in the 30s…to Nahautl a Mayan dialect being spoken in that space is such an… Read more »

That’s interesting to know and helps explain the use of the film in the play. Thank you! In response to your comment I looked (not deeply!) for more information and, while learning about a controversy about where the exterior scenes were filmed, will have to do more roving around to find out more about the filming of the interior scenes of that and other films. I can’t quite follow the idea that expectations overwhelmed the non-linear story telling but I’m glad you raised the point. Best of luck in your work! Yvonne

Thank you for the review. The Sheik was actually filmed in the location. It is brought up in the play multiple times. Valentino was there before the Shriners built the Mecca Temple. Used to be an old movie studio. The playwrights did a lot of research. But maybe the expectations overwhelmed the non linear storytelling.

This is another example of highly competent actors needing a good vehicle but not getting it. I had great expectations which led to disappointment because of the incoherent way the play was put together. It was almost adolescent in its temperament and was boring. Much of the writing was in clichés – and the very little bit about City Center was almost lost. To top it off the seats were hard.