Fast Company is a fast moving, funny and suspenseful comedy about an Asian-American family of grifters, the Kwan’s, who’ll con anyone — best of all one another — to get what they want. 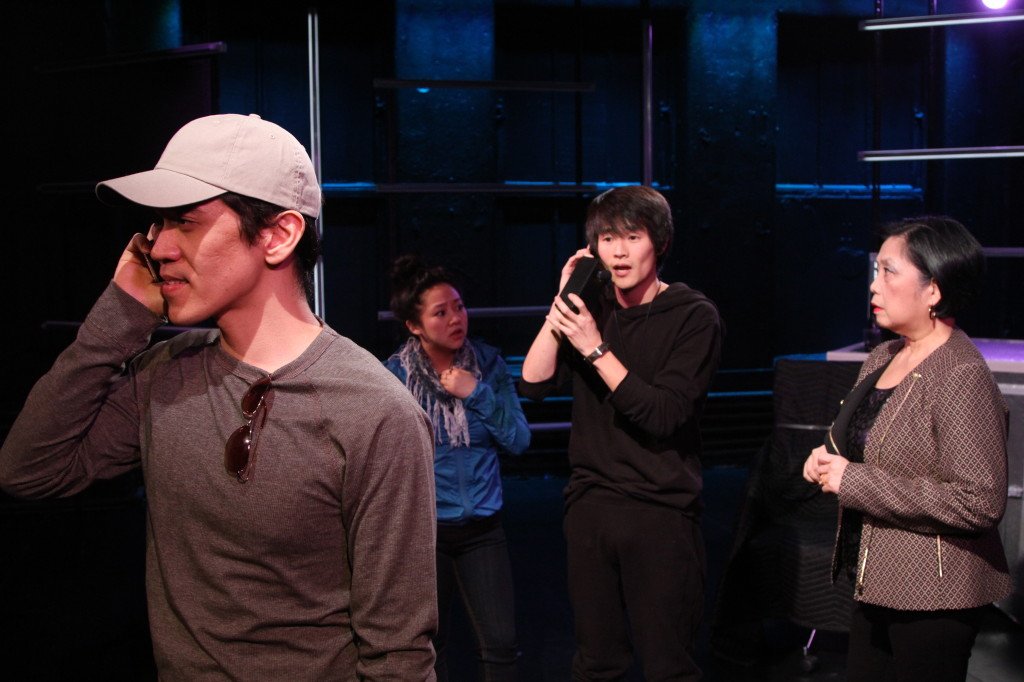 Blue, the girl of the family, using, she says, probabilities based on her college study of game theory, manages to swipe a copy of Action Comics #1, the first  Superman comic book (worth over a million dollars, the world’s most valuable comic book) but she loses it!  To get it back, she has to turn for help to her brothers who’ve never thought much of her grifter skills.  This sets up a round-robin of conning with her brothers, Francis, who’s retired from pick-pocketing to become a TV magician, and H, a crooked gambler, until, in their need, they turn to that legendary con great, Mabel — their mother.

As con artists, they base their moves on calculations of what their targets expect and don’t expect. What makes this play so delightfully funny is the playwright’s canny sense of what the audience can and can’t anticipate — the playwright’s the best con artist of all:  she knows what we will and won’t figure out, and that, as the play continues and we catch on, we’ll get smarter — so she ups the ante.Fast Company is a voyage through cleverness: the Kwans outwit one another and the playwright outwits us — to the very end where she shifts gears to give an unexpected ending that enriches the meaning of her play.

Stephanie Hsu as Blue let’s us catch on through her facial expressions and body language that there’s some kind of special, i.e. family, intimacy, between herself and her brother Francis even before we know who’s who, and Francis — with help from the playwright — takes “cool” to new lengths.  Moses Villarama is touchingly conflicted as H, and Mable, as played by Mia Katigbak, with her outstanding deadpan, is tops in the script and in the play.

As for “game theory” … well, the concept may have given a scientific whiff that would involve the Alfred P. Sloan Foundation which has partnered with the Ensemble Studio Theatre to develop plays about science, technology and economics* … but crooks were crooks before there was game theory.

Fast Company plays at The Ensemble Studio Theatre on Manhattan’s west side through April 6, 2014.

*Two plays developed through this partnership reviewed on Let’s Talk Off Broadway are Photograph 51 by Anna Ziegler and Isaacs Eye by Lucas Hnath.

I’m not sure I could tell you what happened to the comic book … and as I mentioned in my review I felt the “game theory” bit was just a paste-on. Most of all, I want to thank you for your analytical review. I’ve read it more than once and it’s given me lot of food for thought, and I appreciate it! Yvonne

Maybe I missed something. It’s always possible that between the rapid-fire dialogue and my aging ears, I missed certain details that would have made the play make more sense to me. But I write on the assumption that I didn’t miss those details. “Fast Company” is amusing. But despite the idea that this is a family of con artists, the confidence game is pretty much absent from the play. Before the play begins, Blue and her brother H (and maybe one or two other non-family con artists—I don’t remember) have obtained Action Comics No. 1, worth, according to the play,… Read more »

There are different states – a good one runs to $2,800,000 – see http://www.nostomania.com/servlets/com.nostomania.CatPage?name=Top100ComicsMain

Hope you saved your old ones!

Yes — that Superman I comic … by the way, I looked it up on ebay and it was available for a few $$$ …guess that’s not the real one they were after in the play!

Your review captured the spirit of this delightful play. The repartee between the characters was really well done both from the point of view of script and the performance. I do have one question and that is, since in this carefully plotted play nothing has been put in by chance, I wonder what the real significance was of the specific comic book which was the object of all their desire?