This is an important and fascinating play about the interplay between ideas, evidence and personalities surrounding one of the greatest scientific discoveries of all time, the structure of DNA.  Of three scientists central to the discovery, the play focuses on the one who didn’t get the Nobel Prize, Rosalind Franklin;  James Watson and Francis Crick received the Prize in 1962.

Franklin’s x-ray diffraction photograph, number 51, played a key role in defining DNA’s structure, and its evidence was used by Watson and Crick in their article in Nature Magazine in 1953 in which they introduced the world to the double helix and other key structural aspects of DNA, the building block of life.

For a time, the play seems to be about why Franklin didn’t get the prize with some implication that it had to do with the obstacles in her path as a woman scientist in the 1950’s.   We see her arriving from France, where she’d established her reputation in x-ray diffraction photography, to Kings College, London where she struggles to maintain independence over her scientific project of photographing a particularly promising sample in DNA research, and also to resist — at other times absorb — slights from her colleague, Kevin Collins, because she’s a woman.  In spite of the interpersonal flack, she’s driven to achieve, missing meals, missing sleep, and heedless even of dangerous x-rays inherent in her photographic technique.  And she succeeds.

Through her persistence and by making significant improvements to her photographic equipment, she captures on film images of DNA, finally reaching with photograph 51 a clear picture of the famous X which we now know is a cross-section of the double helix.  She didn’t know that then.  The issue is:  how to interpret the X form.  She ponders, and also resists, the idea of a helix, seeking more definitive evidence.  Meanwhile, through the “old boys network,” Watson and Crick, at another laboratory, get a look at photograph 51 and immediately link what they see in it to the theories they’ve been developing about DNA.  The photograph becomes a significant part of the evidence in their first Nature article, which led them ultimately to the Nobel Prize.

Would she have won the Prize along with them had she lived?  One can’t be sure.  She experienced difficulties as a scientist because she was a woman but she succeeded in doing what she wanted as a scientist.  She was the first to make the defining photograph of the double helix but didn’t know what she had, or didn’t know for sure.  Watson and Crick, more theoretically minded, and working as a team, were the first to grasp the meaning of her photograph for revealing the structure of DNA.

The stories of the discovery of DNA and of being a woman scientist in the 1950’s, though intertwined, are ultimately separate, and the mixed focus of the play to some extent dissipates its power — we thought we were going here but we end up there.  Never mind — superb acting, with the focal role of Franklin beautifully played by Kristen Bush, fine writing with exceptionally smart and witty dialog, marvelous set, importance of the subject matter, the high intelligence and thoroughness with which the issues are explored make this a thoroughly enjoyable and exciting play to watch, and one which continues to bring pleasure in thinking about after.

About the set by Nick Francone with lighting by Les Dickert which we see first, waiting for the play to begin.  The stage area is big, and very wide in proportion to its depth.  It’s designed in tones of grey, white and silver that are beautiful in themselves and suggest ideas such as the clarity and precision associated with science, its sought-for objectivity and its technology.  The overall shapes form a time-appropriate cubist symphony, with design touches that say immediately “’50’s art deco”.  Bottles and vials of the old chemistry are near and specific, and in the background is a magnificent abstract mural suggestive of crystalline structures.  The set’s a work of art worthy of being seen on its own.

Photograph 51 plays at the Ensemble Studio Theatre  on West 52nd Street in NYC through November 21. 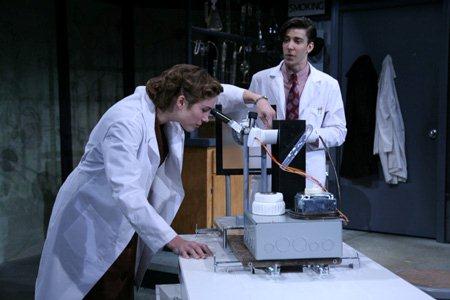 Thank you for this excellent analysis of this very significant and excellent play. The dramatization of the principal characters brought to life one of the most important discoveries in science of all time. The Nobel Prize was awarded for more than just the realization of the double helix. This person feels that had Franklin lived; she would have been a Nobel laureate.