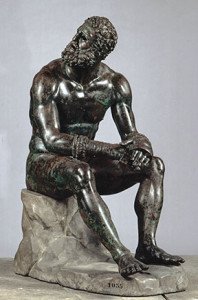 This is a rare opportunity to see one of the finest and most compelling works of art ever made. The bronze Boxer*  is somewhat over life-size but so immediate it’s hard to think it’s not a “real” man — and a man of total experience:  exhausted but powerful, brutalized but handsome, dazed by what’s hit him but alert for whatever’s coming his way.  Ready.

Made in the Hellenistic period, when a love of realism made a powerful advance on earlier Classical idealism, the boxer is astonishingly realistic. Seated and near to exhaustion from a match, and bleeding from wounds all over his body, he still has the energy to turn his head.  What attracts his attention?  Is he hearing applause? Listening to his trainer’s advice? Or is he getting a look at his next opponent?  Still wearing his boxing gloves, he’s gathering his force for his next match (these ran back-to-back).  His arms are relaxed but his toes are tense:  his struggles continue.

Read away that dark patina, developed over time through oxidation, and see him as he was originally, when the bronze was polished to the color of an athlete’s tanned and oiled gleaming skin.

To further “color” the statue realistically, the sculptor inlaid the rosy lips and nipples with copper:  copper inlays also “paint” the rivulets of blood that run from his many wounds, and the cuts on the ungloved knuckles that landed the punches.  Under the swollen eye, the sculptor inlaid a bronze alloy, darker in color than the rest of the sculpture, to depict a large bruise — one of the most remarkable, and touching, uses of inlay in ancient art.

The boxer’s eyes were never meant to be empty and blank as they appear in the photograph.  Originally the sculptor inlaid the eyes using materials that made them look natural.  Those inlays are now lost but to help visualize them the museum is exhibiting near the boxer inlaid eyes disembodied from some other sculpture (not otherwise known) in which the whites are marble, the irises quartz and the pupils obsidian, and the Boxer’s sculptor would have used these or other materials for a similar effect.  Catch your breath — the boxer has individually formed bronze eyelashes that once surrounded those life-like eyes.  Who was the great Greek sculptor who made this work?  It’s unknown.

“Look at the blood running from the wound on his cheek!” visitors say, circling the statue.  “Look — he has cauliflower ears!”  The realism of form and detail are fascinating and the technique is surpassingly brilliant.  But that’s not in itself what makes the sculpture so compelling.  What a man indeed — the history of struggles written all over his body and his determination to fight on express a man’s story, and that of human existence.  He is one man, caught in specific moment, and he is all men through time.  This is a sculpture of existential truth.

The Boxer was discovered buried in the Quirinal Hill in Rome in 1885.  Was it made by a Greek sculptor in Rome or was it brought there by ship as many sculptures were?  Did it represent a particular boxer?  The answers are unknown.  What is clear is that it was highly valued, perhaps even venerated, since it was buried purposefully in antiquity, perhaps, like many valuables, for preservation from anticipated invasions.   So many great bronze sculptures from antiquity were melted down for the valuable metal that only a handful survive today.  Thanks to those who buried this one and preserved it.

Looted by the Romans in Greece, most likely.

Actually the boxer was found in Rome, in an excavation of the imperial palace.

It would be interesting if you could send in a photo of the boxer by Brown.

Thank you for this penetrating analysis of this most remarkable sculpture. We are thankful to the Italian museum and privileged to be able to view this in New York. I know of nothing that comes close to the portrayal of a human being as this. At Princeton Joe Brown had created two sculptures of a boxer. One, called the Victor, which I suspect was only cast in plaster and not in bronze. These were great works and can be compared this “Boxer”. I wonder if Brown used this Boxer as inspiration or as a model?