This outstanding exhibition moves ones thoughts between intimate experience and vast philosophical and artistic vision, all combining to give a vivid sense of the Civil War at home and on the front. 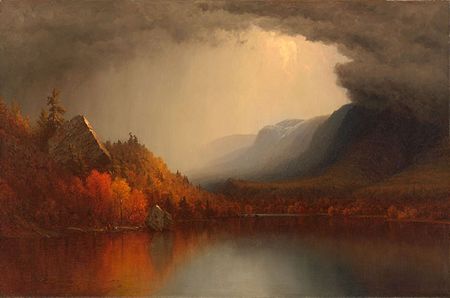 A stunning aspects of the exhibit is the insistence with which, again and again, artists looked to the landscape to express thoughts and emotions, as if humans had a cosmic partner in nature.  In the years leading up to the war, paintings of storms and phenomenal portents and storms abound, such as Frederic Edwin Church’s dramatic Meteor of 1860, and Sanford Robinson Gifford’s A Coming Storm, expressing the sense of war’s prodigious imminence. 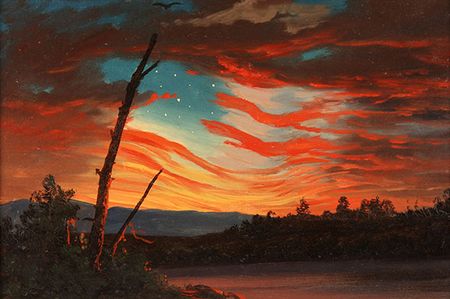 Church | Our Banner in the Sky

An unforgettable expression of the cosmic projection of human emotion is Church’s Our Banner in the Sky of 1861.  This thrilling visual leap of imagination is fueled by grief of two war “firsts”: the lowering of the Union flag at Fort Sumter when the Confederates captured the Fort in April 1861, the initiating war event, soon followed by the death of Church’s friend, Theodore Winthrop, the first Union officer war victim.  And this great painting itself was recognized as the first “war picture.”  The streaming colors of clouds at sunset and the star-studded sky form an alternate image of the American flag, tattered but still waving in the winds of liberty, the defeat of surrender redeemed by resilience and prediction of ultimate victory. 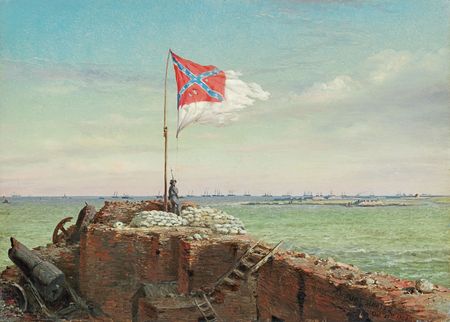 In turn, the Confederate painter Conrad Wise Chapman painted the tattered but resilient Confederate flag in The Flag of Sumter, Oct 20 1863. At this point, the fort and in particular its flag that carried a huge symbolic burden for both sides, were under relentless  bombardment by the Union Navy.  Each morning, the Confederates looked to the successful raising of their banner yet one more day for renewal and inspiration.   In the painting, the flag is guarded in proud isolation against the sky, the joining of its white field with the clouds lifting its image into the spiritual domain. 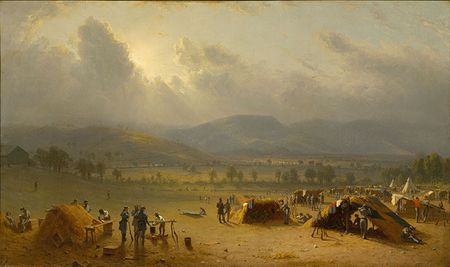 News of the Union’s victory at Gettysburg has just reached the beleaguered army in Sanford Robinson Gifford’s painting of  Camp of the Seventh Regiment, near Frederick, Maryland, July 1863.  The bright, warm sun breaks through the storm clouds at this moment, conveying the flush of optimism stirred by the news, nature pitching in to convey human experience and magnify its importance.  What a moment!  And yet, among the great Civil War photographs on view in this exhibit is Timothy H. O’Sullivan’s iconic view, A Harvest of Death, Gettysburg, July 1863.   How do human beings make sense of and integrate such stark emotional dissonance? 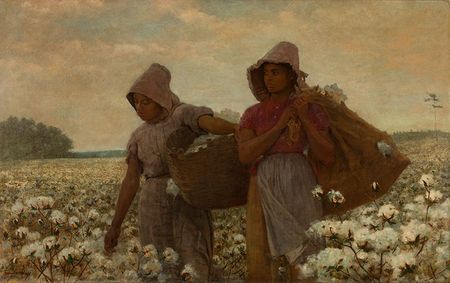 Many of the paintings show scenes of life in the South before, during and after the Civil War – not cosmic but specific, narrative and detailed such as Winslow Homer’s  The Cotton Pickers (above).  These are rich in observation of human character, ambiguous and tragic social situations and of information.  In Eastman Johnson’s Negro Life at the South of 1859, the backyard of the slave quarters abounds with life among slaves of a great range of skin tones from dark to white:  meanwhile, a sly — and noticeably white — cat slips into an upstairs window.

In Homer’s post-war painting, A Visit from the Old Mistress  (1876), a white woman, needing some work done, pays a visit to  a group of her former female slaves — only now she has to negotiate with them for their wage.  She’s reluctant, realistic, and resentful;  the leader of the former slaves, muscular arms crossing her chest, looks to be driving a tough-minded bargain, and remembering. 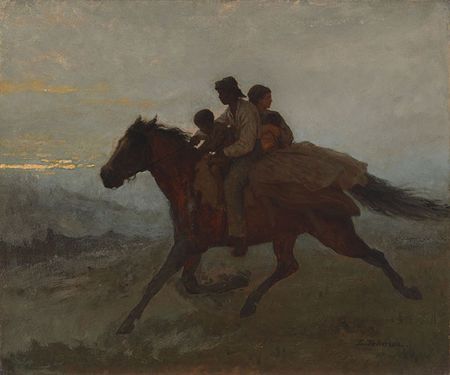 Among the paintings touching on the Abolitionist movement, Thomas Moran’s Slave Hunt, Dismal Swamp, Virginia, 1862 shows hunting dogs hot on the heels of a fleeing slave family.  Moran painted this for an abolitionist English patron, referring evidently to Henry Wadsworth Longfellow’s abolitionist poem of 1855, “The Slave in Dismal Swamp.”   The family in Eastman Johnson’s A Ride for Liberty–the Fugitives Slaves, March 2, 1862 have a better chance of making it.

The exhibition concludes with a symphonic crescendo of some of the greatest American paintings:  Frederic Edwin Church’s Cotopaxi, The Icebergs, and Rainy Season in the Tropics, and Albert Bierstadt’s Looking Down Yosemite Valley, California, 1865.  These, and a telling and remarkable “before and after” — John Frederick Kensett’s two paintings of the “same” scene of Rocks of Paradise, Newport, the first of 1859 and the second of 1868, in their way tell the story of the Civil War over time, marking changes of attitudes from its inception to its aftermath.

Not only the works of art but the thinking and organizing ideas are of the highest caliber. Don’t miss The Civil War and American Art. 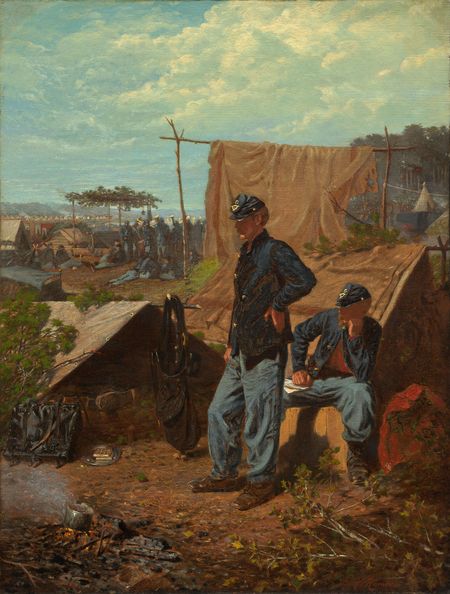 Your review and analysis of the paintings and photographs in this outstanding show adds tremendous pleasure and understanding of why these images are so very moving. Thank you for making the viewing experience so much more meaningful.