… why do the righteous playgoers suffer? …

The story of Job reinterpreted by a contemporary playwright:  what an intriguing idea.  Exotic times and places — here the ancient Near East — are appealing.  And a play that takes you to supernatural venues, like Heaven, as this play does, and to actually “see” God, at home, so to speak, always have an extra magnetism.

I was really looking forward to this play.  But Bradshaw’s Job is intellectually incoherent, weak on character, and brings no insight into the iconic story to the question asked by the story of Job:  Why do the righteous suffer?

Instead it has the most graphically cruel, bloody, violent, and sadistic depictions of any play that I have ever seen (and my guess is that has ever been produced).

Back there in the ancient Near East, righteous Job starts off as a man of stature — he’s a Judge in his community — and wealth — he has huge holdings in land and livestock, and he has a loving wife and family.  Truly he’s been blessed by God and he responds with piety and burnt offerings.  But — it’s easy to be good when things go well for you — Satan works out a deal with God to test Job’s piety by loading Job down with misfortunes.

Soon Job’s son seizes his sister, Job’s daughter, in brutal lust, beats her, and — the girl’s all-out attempts to fight him off turning into involuntary twitches — strangles her to death — and with the help of a huge drop of his own saliva to his penis, rapes her.  (Is it counted as rape if she’s dead? a character questions later.)

Still Job does not curse God. 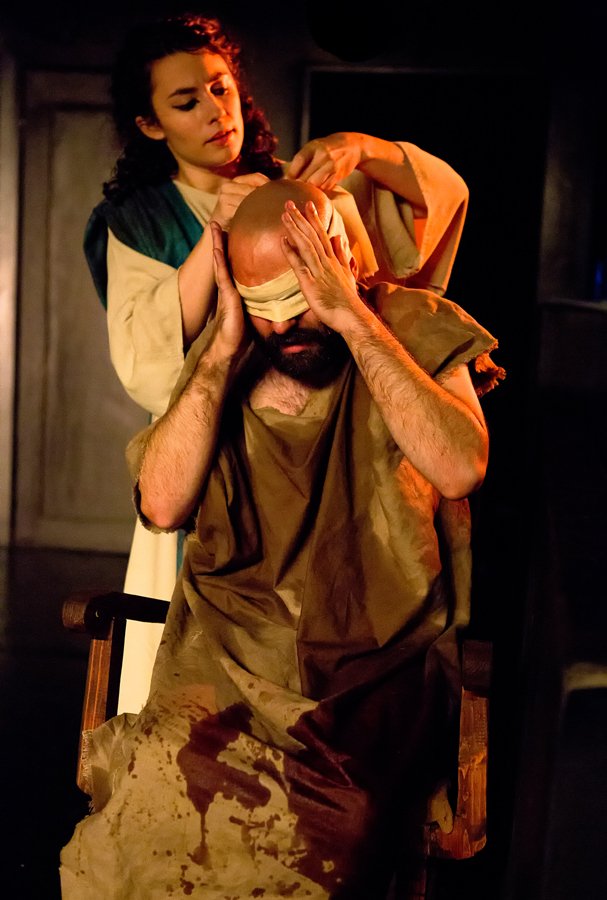 Sean McIntyre as Job with Marie-Claire Roussel as Esther.  Photo by Hunter Canning

But his wife curses Him plenty and is out the door.

Subsequently Job is castrated by victims of his earlier justice, the lumps of Job’s testicles — and penis — falling bloody but unmistakable to the stage floor.  Plop.  And plop.

Naturally, the victims, father and son, cut out Job’s eyes.   (Boils would seem good after this.)

The brutes topple the wounded man over in his chair.

Then they take the chair.

Job’s eye bandages, his patriarch-in-the desert type cloak, and the whole stage is a bloody mess for the rest of the play.

By the time Job’s cattle, sheep and goats are stolen, why should anyone care?

There are scenes in Heaven where an easy-going God fecklessly keeps in bounds the rivalry between his two sons, Jesus and Dionysus (there are a whole lot of other of God’s sons scratching at a closed door), and chats with Satan about just how far they should take this Job thing.

So far, although some of Job’s misfortunes are newly invented, the story has — roughly — followed that of the Book of Job.  There’s a new twist, though, at the end which I won’t reveal — it’s just another graphic presentation of disgusting, brutal violence unmotivated by anything the playwright has developed through the play.

The Flea Theater’s crew of outstanding young actors has less to work with than usual because the characters, even including such potentially rich figures as Job, and God, are thinly written, and ultimately are not sympathetic or arresting.  God is cute.  Job is bombastic.  The choreography is flat and obvious, compared with that seen at The Flea recently in its masterful production of These Seven Sicknesses, where The Bats had the chance to fulfill their outstanding and varied talents.

It’s conceivable that all this voyeuristic violence could have a point, but it doesn’t.  It’s there for its own sake.  There is no new way offered for looking at the story of Job, no insight into why the righteous suffer, no idea that could carry one’s thoughts to a new place.  It’s hard to square the wishy-washy “what’s the point of this play?” problem with the clarity of purpose and driving development in Bradshaw’s fine, earlier play, The Bereaved.

I thought for awhile the idea might be that Job caught on to the fact that God was merciless and so, following God’s example, became merciless himself but when I asked the playwright in a “talk-back” after the performance if that was “the idea,” he gave the uncommitted answer that he had for most questions, “It’s open-ended.”   But open-ended is one thing;  intellectual inconsistency, unmotivated action, arbitrary characterizations … these take you nowhere.

This portrayal of the book of Job only reinforces the answer to the cosmic question that there is really no answer and one does not need one. I agree with your review entirely –the violence is uncalled for and it appears to be sheer sensationalism. I compared this very inaccurate and poorly thought out depiction of Job for a contemporary audience with that of Archibald MacLeish’s J.B., more than half a century ago. For a 20th/21st century interpretation of the book of Job see J.B.. Would perhaps the Flea Theater think of reviving MacLeish’s J.B.?