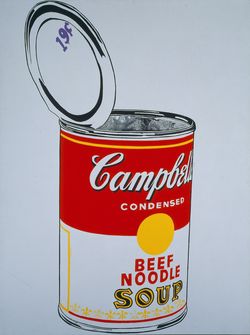 This is a fascinating exhibit, stimulating for its irony, humor, kaleidoscopic glimpses at American culture in the last 50 years, and interrelationships between artists with Warhol the creative, generating the fulcrum. The overall impression is busy and dazzling. The 150 works, about a third of them by Warhol himself, hold surprise, even for those familiar with “Pop Art” and its variety of spin-offs.  Some of the surprises are owed to the intelligence and imagination with which the curators juxtapose Warhol’s paintings, sculptures and films with those of other artists, forming insightful connections.  (Full information on photos at bottom of page.*)

Among his early works, his homey, cartoon-like Icebox of 1961 is personally interpreted 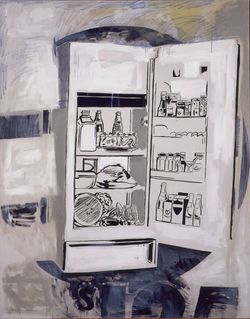 through the hand of the artist working with a brush, like traditional works of art, but it already shows Warhol’s artistic interest in ordinary, kitchen-oriented, objects, a tradition with roots in the earliest Dada works, like Duchamp’s found object, the Bottle Dryer.  Looking forward rather than backward to focus on  Warhol’s influences on others, the importance of Dada, a truly groundbreaking movement in the 20th Century, was missed in this exhibition.  (I’m wondering, are we to be concerned that the food in the icebox will spoil with the door held open so long?) 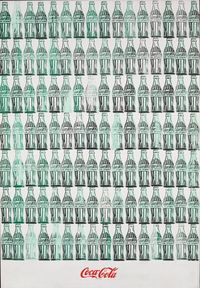 In little time Warhol moved to emotionally distanced representations, notably the iconic Campbell’s soup can, 1962 (top of page*), which is painted though with a constrained cool, and then to the more mechanically multiple silkscreen such as the stacked Coca-Cola bottles, launching Pop Art.

And, speaking of Coca-Cola … at first sight, Ai Weiwei’s Neolithic Vase with Coca-Cola Logo of 2010 made me smile — but, second thought, is this really something we want done to a hand made ceramic vase that has come down through the millennia, 5000–3000 BC ?  (What a beautiful jar.)  Well, new art often seems destructive, even as it builds — no wonder we call it “cutting edge.” 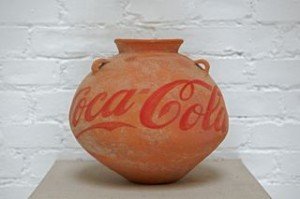 Or, by applying the logo to the ancient work, is Weiwei saying — with Warhol — that wherever and whenever there have been humans, there has been commerce?

That commerce is the essence of the human?

Or that humans dirty their nest?

Or … that Coca-Cola being everywhere, it even made it to the Neolithic?

Warhol’s amalgamation of art and commerce, and the spin-offs by others, spawns a string of thoughts. 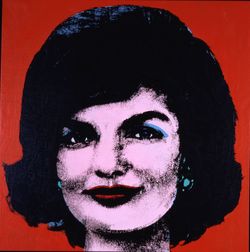 Warhol’s portraits of celebrities like Jackie Kennedy have drawn attention like magnets.  Does Warhol do something “value added” in making these silk-screened multiples with color variations?   Is he merely exploiting or is he making art?  For me, the most thought-provoking aspect of the celebrity portraits is that Warhol wouldn’t think that question mattered. But should we think these questions matter? For me, his celebrity portraits are unacted upon, and void of the mind of the artist, and so ultimately boring. 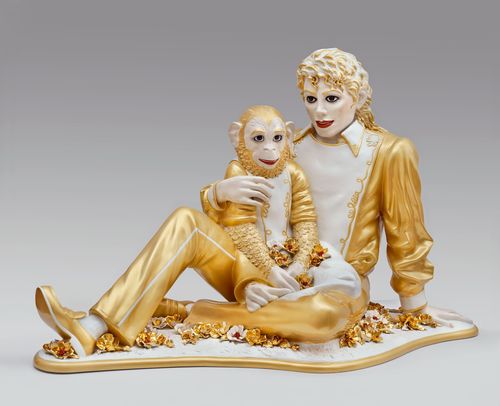 Jeff Koons’ fantasy-ridden Michael Jackson and Bubbles is spectacular, but cruel.  It’s made of porcelain, lavish and physically fragile like Jackson himself.  Life size and detailed, shiny and gilded, it smacks of costly  production.  The white, smooth surface reflects Jackson’s whitening of his skin, and pretty feminizing.   Jackson’s glamour, conspicuous consumption, and childishness. are all there.  You feel the mind of the artist at work in every detail of this arresting piece, as well as its tremendous technical virtuosity — reason enough to see the exhibition — not that there aren’t plenty of others.  But, spectacular as it is, the lack of human sympathy in this portrait, that coldly asks the question, “who’s the monkey?” disturbs me.

For all the brain cells that gets pricked, aroused and tickled by Warhol and others, one work is deeply moving: Richard Avedon’s photo portrait of Truman Capote (no photo available, unfortunately).  The finesse of the printing, the tonal subtlety that embraces the bulge in Capote’s forehead that visualizes his intelligence, the sense of knowing another human being turns ones thoughts to Rembrandt, not to Warhol. 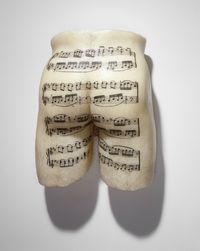 The exhibition argues for Warhols’ liberating role with regard to sex and gender in art in the section “Queer Studies: Camouflage and Shifting Identities.”  Again, looking back, to the Italian Renaissance, for example, one can find examples equal in daring, and  the absence of that historical perspective is limiting.  Some of the images are rather profound expressions of searching self-knowledge, such as Warhol’s self portrait, his likeness almost lost in camouflage.  Others, such as Robert Gober’s Untitled can bring a sort of smile. 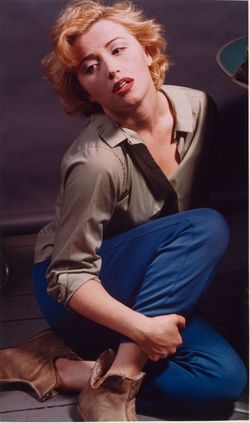 In Cindy Sherman ‘s photographic portrait of herself as Marilyn Monroe in her Norma Jean guise, the tension in the contrast between the appropriated image and Sherman’s modification packs an immediate ironic and amusing punch.  The exhibition might have reminded us that artists have always borrowed (or as Delacroix put it, “stolen”) from other artists and images, but the earlier artists generally sought inspiration and instruction in great works of art.  In contrast, the modern to contemporary artists, removing the appropriated images from their contexts, and modifying them, eat away at the overt meaning of the known or recognizable images, illuminating new meanings and critiques.

Again, this didn’t begin with Warhol:  adding a mustache, like a grafitti’d subway ad, to a photographic image of the Mona Lisa, Duchamp deconstructed the iconic image in his L.H.O.O.Q. , and did some powerful gender bending, well before Warhol’s multiple silk-screens of the Mona Lisa .

Talk about irony, for the dynamic medium of video, Warhol chose to record the most undynamic subjects — people, ordinary or not, at their most banal and monotonous, as you can see for yourself in the exhibition.  Irony is the sharpest shovel for digging deep into understanding, and a savior of sanity! But even irony, alone, is not worth more than one look.

The exhibition ends with a large room wall papered in Warhol’s repetitive cows, and above wafting plastic clouds, blown gently by the electric fan.  Regard Warhol, because you can’t disregard him.  See the exhibition — you’ll have a good time.

Regarding Warhol: Sixty Artists, Fifty Years is at the Metropolitan Museum of Art in New York City through December 31, 2012.

The exhibition is organized by Mark Rosenthal as guest curator, with Marla Prather, Curator, Ian Alteveer, Assistant Curator, and Rebecca Lowery, Research Assistant, in the museum’s Department of Modern and Contemporary Art.

P.S.  The education and outreach aspects of the exhibition are sponsored by none other than … Campbell’s Soup!

When I originally commented I clicked the “Notify me when new comments are added” checkbox and
now each time a comment is added I get several emails
with the same comment. Is there any way you can remove me from that service?
Thank you!

Hope you enjoy it — maybe you’ll write in and let me know!

Yvonne, this is a wonderful review and insightful too! I loved the show a lot and captured some of my favorite pieces for my blog friends to enjoy. Glad to have connected with you. You offered a brilliant perspective on that porcelain sculpture of Michael Jackson and Bubbles. My initial reaction to it was to think, “How gaudy!” and then I read the wall notes. I would recommend that others go see the show too. Warhol is definitely not an artist to be ignored or disregarded. 🙂
Thanks again for stopping by!
Eliz

Thank you for such an informative reporting of this very interesting exhibition. Your contribution to seeing this on in perspective – what has gone before and probably will come in the future – really will make the viewing of this not only enjoyable but also enriching. I cannot wait to see the show. I will keep your notes close in hand.