I can’t imagine a finer production for a developing young playwright than that given Dreams of the Washer King by The Playwrights Realm.  It’s in a small theater and the production’s not hugely expensive or high tech but the set is brilliantly evocative, the directing brings out all the play’s dramatic values and the acting — well, the acting is of the highest order, it simply couldn’t be better.

We’re in an area of small towns and remote cabins.  Claire, whose husband has died, lives with her high-school aged son, Ryan, in one of those cabins, making do with a job in town when Wade,  a big, handsome but rough-seeming guy bursts in — he and his daughter have just arrived to take up a rental in a near by cabin but without any food on hand.  Claire, who kneads and bakes hearty looking bread on stage, provides a couple of delicious looking peanut butter and marshmallow whip sandwiches.  Wade, too, is single — his wife ran out on him. 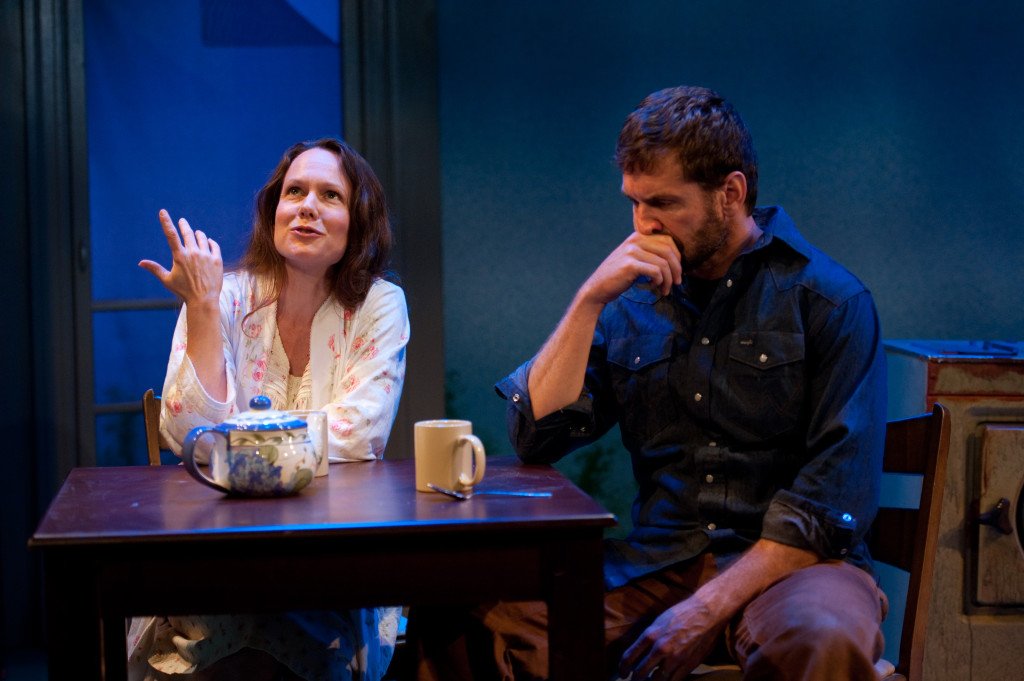 Carla Harting as Claire and Stevie Ray Dallimore as Wade in Dreams of the Washer King.  Photo:  Erik Pearson

Soon we’re watching two sets of tentative, developing romances:  Claire and Wade appear to be getting along well and Ryan forms a gentle relationship with Wade’s daughter, Elsie, who’s attending his high school.  All this takes place amidst a single, weedy set of abandoned washing machines and simple furniture that evokes inside and outside with psychic fluidity — Claire’s cabin, Wade’s cabin, and the scrubby outdoor paths and hiding places where the kids meet, talk, and drink beer.

It’s an appealing, romantic world, in spite of references to its “desolation,” and everything’s going so well that we write off signs of disturbance — like Wade’s roughness even when he does good things, like getting a kid to drink milk from a cup instead of the carton.  We should be worried, though, and eventually the snake in the garden appears in the form of somewhat unexpected eruptive violence. 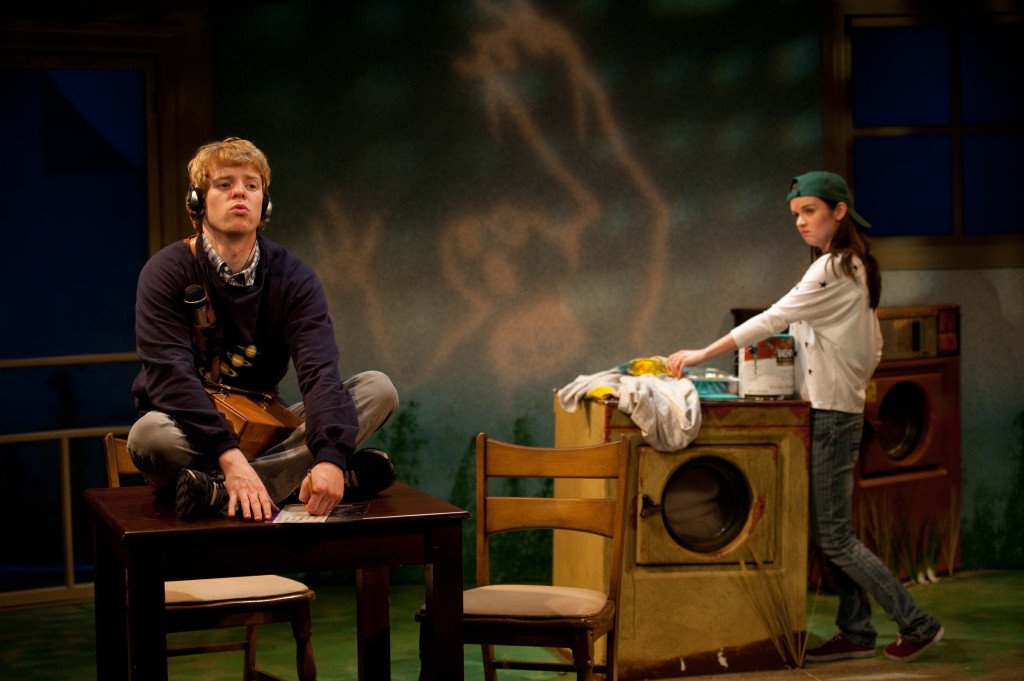 Ben Hollandsworth as Ryan and Reyna De Courcy as Elsie in Dreams of the Washer King.  Photo:  Eric Pearson

The first act is the best, setting up the situations in ways that keep you watching.  Near the end of the first act and in the second, the early naturalness shifts and the play seems to be straining for big effects.  The characters are so marvelously acted that it takes awhile to realize how little we really know about them, just as Claire plunges on with Wade without, as Wade says, really knowing him.  Although we’re given snatches of prior history, the characters lack the ties to time and space that would give the play a more compelling sense of the flow of cause and effect.

Still, Claire, Wade, Elsie and Ryan are vivid, the dialog well written, and many of the individual scenes, such as those between the two children in their hiding place, and Claire’s determined pursuit of Wade, have fascinating honesty.  All in all, Dreams of the Washer King is an exciting theatrical experience.  I’ll look forward to seeing Christopher Wall’s next play.

Congratulations also to The Playwrights Realm, whose aim is “to give our artists the chance to home their craft and gain lasting momentum in the theater world.”

Dreams of the Washer King plays at the Cherry Lane Studio Theatre in NYC’s West Village.

An American story which appears to be well told – looking forward to further woks by this play write.