This is a very enjoyable play, a light comedy with enough seriousness about its characters and thematic consistency to give it ballast.

Giulia, played by Claudia Shear who wrote the play, is a very fine sculpture restorer who, because of some professional problem she ran into, is “stuck” teaching Art History (as an Art Historian who loves teaching Art History I couldn’t follow her there but anyhow … )  Along comes her former mentor who — making up for letting her down in the previous troublesome episode — has proposed her for the big job of restoring Michelangelo’s David in Florence.  In spite of her abrasive personality and tough girl attitude, she wins the great commission!

Giulia is short and dumpy, David , all 13′ of him, is the epitome of male beauty, a genuine and powerful erotic pull for her — at one point they go chest to chest.  But on hand and in the flesh — rather than in the marble — is another epitome of male beauty, Max, the museum guard, with all the good looks and sexual assurance of the Italian lover American girls fall for during their Senior Year Abroad — but what woman of any age can resist, especially when he’s played with delicious machismo by Jonathan Cake?  Over the months of work on restoring David in the Florence Accademia, Giulia’s drawn to Max and he — in his accept-all-life-way — to her unsexy but sexually responsive self (to her as well as to the rest of them, that is).

Center stage is the sculpture of David, caged in a scaffold that reveals him only in parts, with plenty of jokes about what happens with this sensuous, homely restorer gets to work on his — objectified and isolated — beautiful face, erect nipple, or dabs away with a cue tip at his backside.

In the course of the play, the “other side” of each of the characters is gradually revealed in their secret sorrows — Giulia, Max, the gorgeous Italian woman of the great, Florentine Tornabuoni family, stunningly played by Tina Benko, who carries forward work on restoring art in Florence.  No one is “perfect,” even if they look great.  Even David has holes in his back that must not be restored — Giulia wins the day on this — because they are part of his essential history.  We all have flaws, part of our essential history.  The revelations culminate in the removal of the scaffolding, and David stands there in his great, if inevitably flawed, beauty, with the rest of us.

An Art Historian’s cavil:  the images of the sculpture in the play are so far off that if you don’t know in advance what the sculpture looks like you’d get a totally wrong — and ugly — idea.  This is true of the parts in scaffolding, of the projection photo that zooms around the stage, and worst:  in the revelatory ending when the scaffold drops away and we see — grossly disproportioned David!   I could only hope everyone around there knew what he really looks like — please don’t think “this is it.”

Smaller Art Historian’s cavil:  the “Seated Scribe” sculpture mentioned in the play is not Roman, it’s Egyptian… if you’re reading this and involved with the play, please, please amend the line.

But then — nothing’s perfect, and the message of the play is in spite of that there’s plenty of joie de vivre to go around:  one leaves Restoration with a big smile, inside and out. 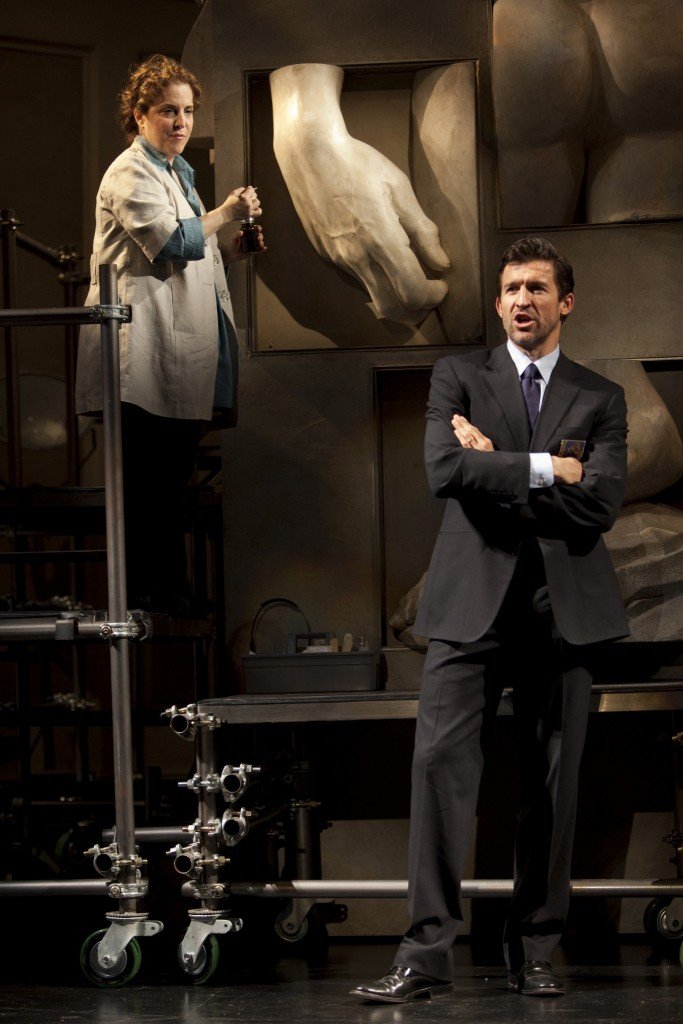 Can’t wait to see this play bring to life in center stage! I’mexpecting a lot of joie de vivre with a lot of twist in the story. Great cast and brilliant director! I’m pretty sure, this will be a big hit in broadway!