Written in 1939 in response to Hitler’s invasion of Poland, Bertolt Brecht’s Mother Courage and <her Children is set in the 17th Century during the Thirty Years War.  It goes beyond theater, standing in the minds of those who know it as an archetypal image of war as seemingly endless, futile and cruel. A Play On War is presented as being inspired by Brecht’s Mother Courage but this production by the National Asian American Theatre Company (NAATCO) is essentially Brecht’s play.

Mother Courage (here called variously “The One on the Cart”, “The One Who Watches Television”, or “Mama C”) makes a living for herself and her children by selling items to soldiers from the wagon she wheels through a war torn countryside.  She profits from the war and, one by one, loses her three children to it:  her older son, her younger son, and her mute daughter, until at the end she has nothing but the wagon.  There it is in its powerful nutshell.

The machine of war grinds each of its characters, innocent or perpetrators, smart or stupid, or the usual mixed bag, to dust.  The characters aren’t revealed to the audience through their words and actions;  they’re emblematic and used to express Brecht’s ideas and visions.  We know who they are from the start and they don’t change;  their situations change, all beyond their control.  And which side you’re on doesn’t matter:  you loose on both sides.

Visually this production is original and intriguing.  The white, simplified costumes support the symbolic nature of the characters;  as a friend pointed out, white is a color of mourning in the Japanese tradition and, particularly interesting for Brecht’s title, is also associated with courage.  The movement is choreographic rather than naturalistic.  Aspects of Arabic clowning and the Beijing opera are included, as we’re told.  The “bad guys” (of the moment), soldiers who come to grab civilian recruits, ride threateningly fast on child-size bicycles, a particularly effective way of conveying Brecht’s thoughtless, fascist toughs.  The music, both as background and as accompaniment, is evocative and warms the experience of watching the play.

A variation on Brecht’s script is that instead of a continuous time line, the narrative shifts back several years every time it takes up another child’s life, returning to the point where that child’s story veers off to bad.  This was not a good decision:  although fate holds a different end for each child, they interact as members of one family so this device comes across as repetitive and makes the play seem overlong.

em>Mother Courage is challenging, exciting and iconic but it’s not seductive.  The characters are not “well rounded” and “sympathetic”:  Brecht truly brings us into the play of ideas on all counts.  Restarting the story several times as here turns a powerful but challenging play into a marathon.  It doesn’t help that Brecht’s twelve years of war in twelve scenes is turned into over twenty!  Nevertheless there are some intriguing visual and musical ideas.  They don’t remove A Play on War an arm’s length from the original, but they provide some stimulating ways of experiencing Brecht’s play which is, itself, highly stylized and open to experimentation.

A Play on War is at the Connelly Theater in Manhattan’s East Village February 12 through March 6. 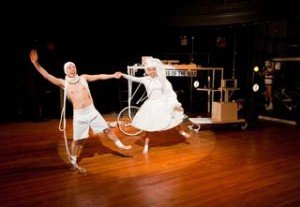 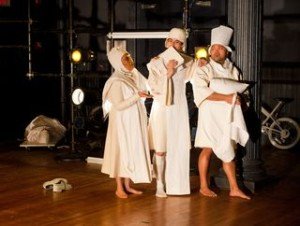 Pipeline Theatre Company is doing a Brecht play, The Caucasian Chalk Circle at Theater for the New City, and would very much like to invite you, but could not find any contact information on your site! If you are interested, PLEASE shoot us an email at pipelinepress@gmail.com, and we will give you all of the info!

Thanks for writing and for your comment … I’m not exactly sure what you mean by your post view being low … I can’t picture what you mean but maybe if you described it just a little more I might have an idea, tho’ I’m not very “technical” so I’m not sure I could help … ???

I so agree. The richness of NYC off-Broadway, the dedication, imagination, creativity, daring — and willingness to sacrifice for the vision — is amazing and inspiring.

I agree in that the original Brecth is better theater and a more poignant story. However credit to this company for doing ani interesting, and at times, an arresting presentation. Mother Courage was excellent and one of the highlights of this production was the one woman band both the composition and the performance. New York is indeed lucky to have theater companies like this that are willing and quite able to explore and bring new insight to the theater.

Your review of A Play on War is, as usual, insightful and informative—I did not know about the color white,for example, which (thank you) I found very interesting. I will probably be more aware of color on the stage when I go to the theatre now.