See this play and you’ll have a good time! 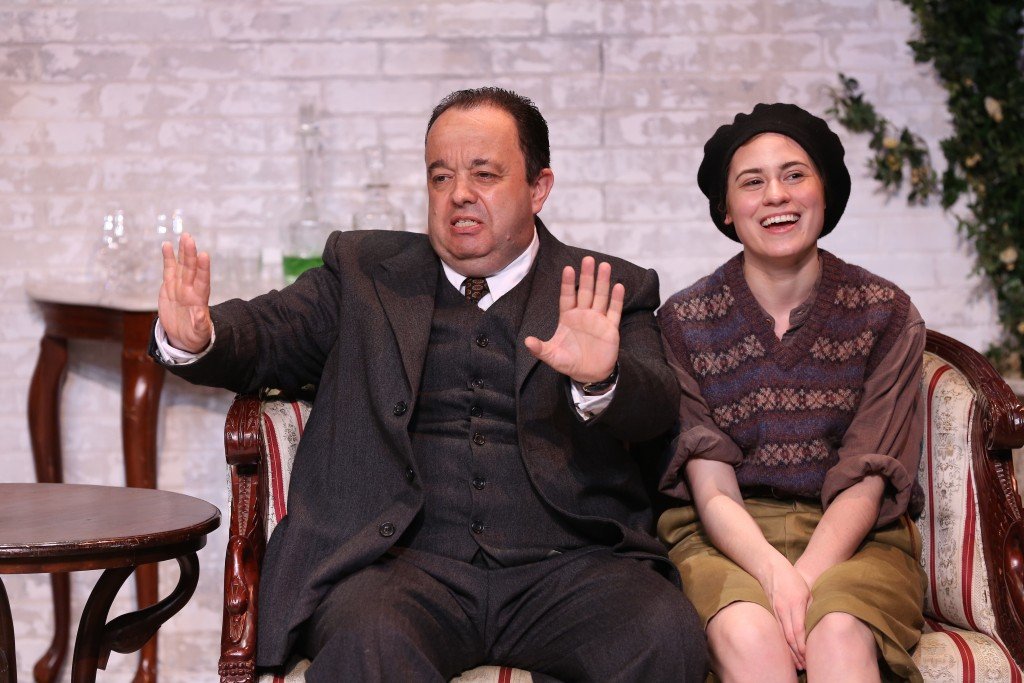 Lord Kettlewell, at his home in the English countryside, is on edge because his financial investments have turned sour.  Kettlewell is not alone:  lots of investments had turned sour at the time the play was written, in 1931, early in the Great Depression.  Still, as his friend Churton responds to Kettlewell’s sputters with laid back wit, it comes across as all very funny.  And the more Kettlewell sputters – he’s also upset his paramour, Hilda, has announced she’s arriving, uninvited, that afternoon – the funnier it gets.

We don’t have to wait until afternoon though, for the unexpected arrival of his daughter, Pamela, whom he hasn’t seen for so long he can barely recognize, and who falls upon him dressed in unisex scruffy.  He has no interest in her – since their separation ten years ago, his wife has taken care of Pamela.  That this Oxford educated young woman has just returned from Russia where she joined the proletariat in doing factory work does nothing to lift Lord Kettlewell’s mood.  Even worse, she has in tow a skinny young man, Staggles, who insists on being called “Comrade.”  Thus, the young British idealistic Communists meet the British capitalist nobility – at a bad moment for that nobility. 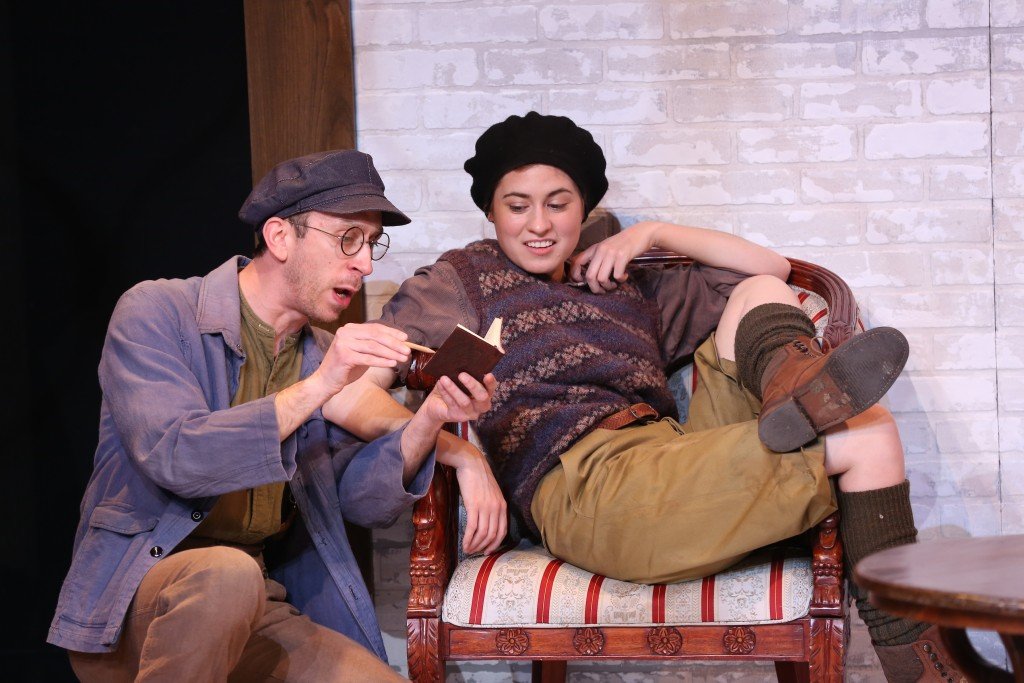 At any rate, Pamela announces that she’s moving in with Daddy.  Why?  We really don’t know but luckily there’s plenty of time before we find out for amusing confrontations among political opposites – funny but with underlying meaning — as well as Malvolio-like romantic misunderstandings involving the self-described “austere” but randy Staggles.

But most of all there’s Pamela, a feisty, self-confident, manipulative and generally amused young woman played with compelling wit, charm and bounce by Emily Laing.  She – both as character and actress – is half the show and worth every minute. 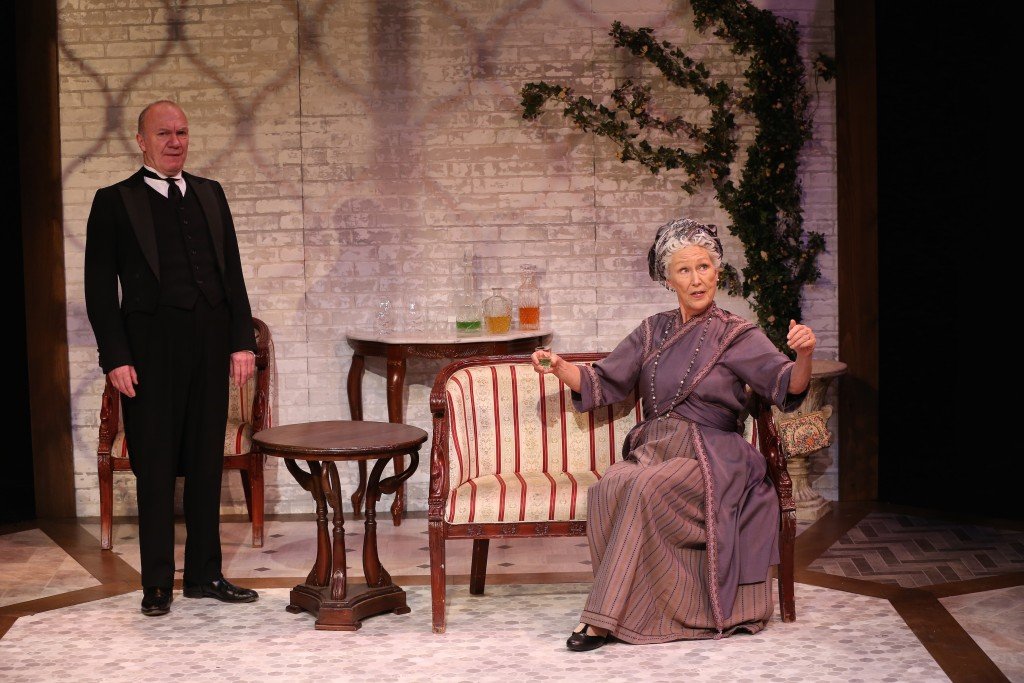 Well, maybe not quite half because there are some other wonderful characters, all humorous but connected, with the lightest of touches, to the sense that Capitalism is in trouble at this moment while Russia’s factories are humming along. The dream of Parsons the Butler is to purchase the big house from the financially pressed Lord Kettlewell,  and run it as an inn for weekend visitors.  Lady Knightsbridge drops by (peace and quiet are not in Kettlewell’s karma today): she disapproves of Pamela’s breezy breaches of  protocol with aristocratic hauteur – while  trying any way she can to make a pence or a pound.  Hilda, the Lord’s paramour, arrives – you’ll like the way Pamela makes short shrift of her.  And (oh the machinations of Pamela) the long-separated Lady Kettlewell arrives.

The direction is tone-perfect and the cast without exception excellent.  To mention only some, Brian Pretheroe as Lord Kettlewell maintains a fine line between a lordly charismatic presence and current befuddlement.  As the cool-in-the-midst-of-the-storm friend, Churton, Hugh Sachs delivers some of the funniest lines in the play with perfect timing.  Derek Hutchinson is touching as he threads the needle between a butler’s  proper behavior and down-to-earth readiness to take advantage of Kettlewell’s difficulties.  Richenda Carey is particularly wonderful as Lady Knightsbridge – that grim, tough mouth:  you need to see the way her face alternates between high class superiority and practical profit motive!  Steven Blakeley plays Comrade Staggles as a Cassius with a lean and hungry look you have to love.  And making the plot go round is Emily Laing as Pamela – star power in action. 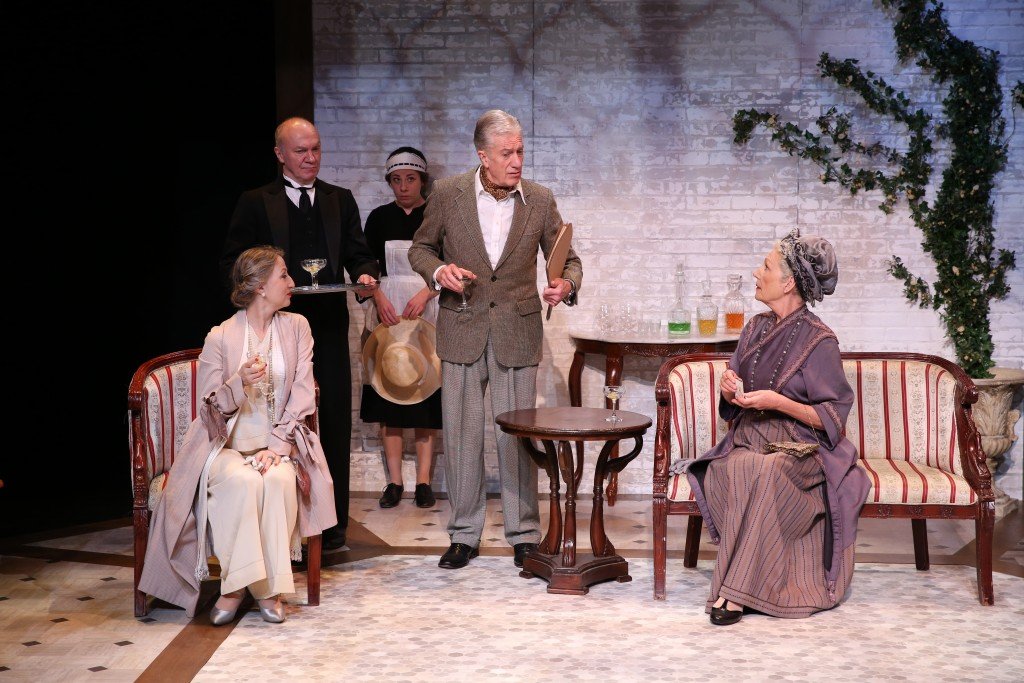 J. B. Priestly called The Roundabout “a very light comedy … a little less intellectually negligible than most very light comedies.”*  That’s exactly right: it’s very funny but its underpinning of the effects of the great recession as played out among a capitalist English aristocracy and idealistic young left-wingers gives it a particular strength and historical interest. The play ends a little too quickly:  we’re left with a sense that some explanations are needed about why things resolve as they do.  But that’s only after a thoroughly delightful time spent at Lord Kettlewell’s country home.

The Roundabout is produced by Cahoots Theatre Company, The Other Cheek & Park Theatre for Brits Off Broadway.  It plays at 59E59 Theaters in midtown Manhattan through May 28, 2017.  For more information and tickets, click here.

*  Quoted by J. B. Priestley’s son Tom Priestley, in the program note.

Could I ask you make a spelling correction.

Within the review you say:

as well as Malvolio-like romantic misunderstandings involving the self-described “austere” but randy Straggles.

However, it is Staggles (no R).

as well as Malvolio-like romantic misunderstandings involving the self-described “austere” but randy Straggles.