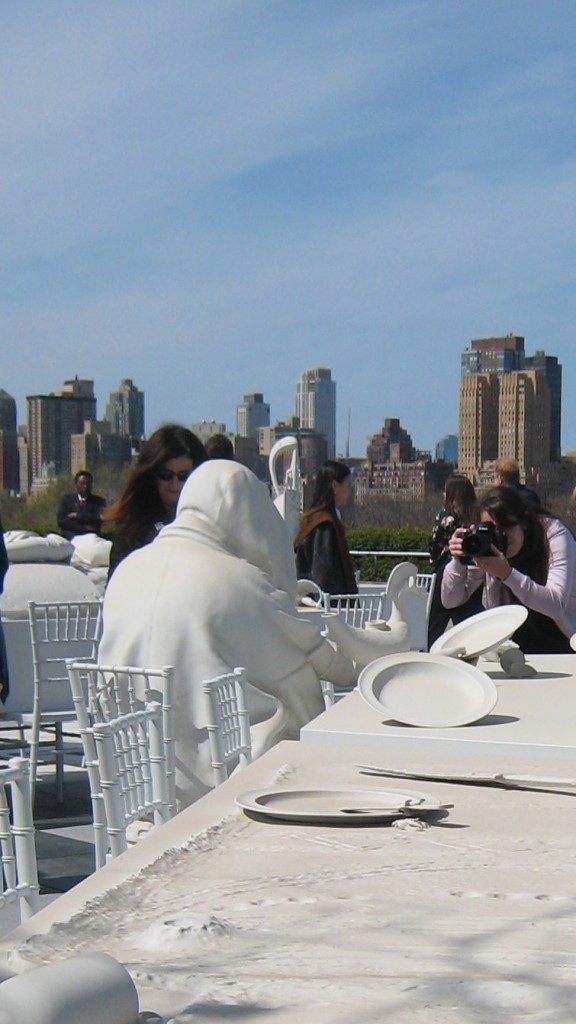 It looks like a party — all those banquet tables (my heart lifted as I thought we’d be served refreshments!)   But don’t try to take a seat.  Only one figure is seated at a table, and his plate is empty (left).

As you move through this world of white, you see the tables are cluttered with elegant but toppled empty goblets, plates and platters with ancient imagery, askew, moldy rolls, chicken bones and scavenger crabs.  On others tables are recumbent figures, alive and dead, writhing humans entwined with tomb effigies. Black sculptures, with chalky white dust drifted onto them, surround and punctuate the “banquet.”

The Theater of Disappearance is saturated with paradox.  The banquet tables are both tactile and ghostly, sensuous and without gratification.  The interrupted meal is timeless, littered with artifacts from a conglomerate past.  One thinks of tomb burials with beloved artifacts to accompany the deceased to the  afterlife:  like the Chinese Emperor Qin in the museum’s current exhibition three stories down in the museum. 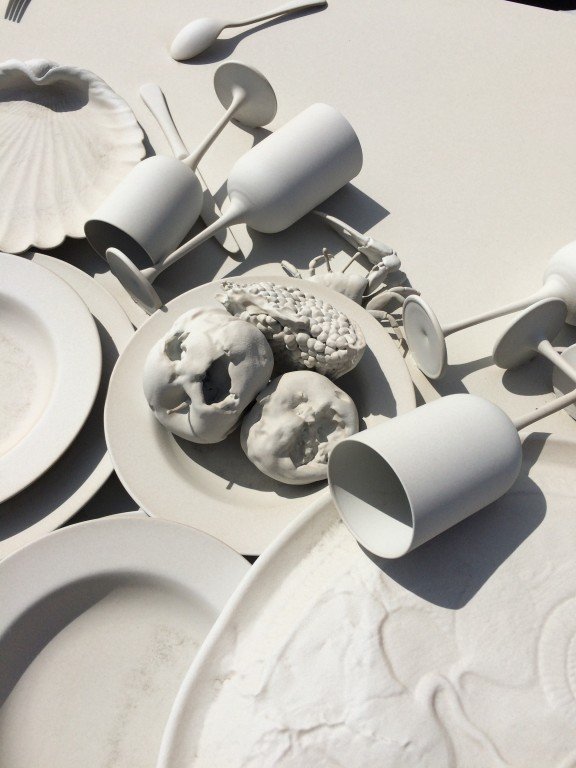 Rojas has drawn on the world art collection below the roof of the Metropolitan Museum — underfoot you can say.  You’ll find works of art and parts of works you may recognize., a South Sea Island house post, ancient Greek coins, goblets, fruit scraps, chicken bones and half-eaten hard rolls, heads, arms, bits and pieces of art conjured up here by the artist through computer photo digitizing and laser scanning, milled or 3-D printed, and then arranged, compressed, stuck together in a new world of shocking impact and visual fascination.  Some images are drawn from living models, including the artist himself, and treated with the same techniques that create a fascinating realness.  The sculptures are actually formed of urethane foam, and painted, the white ones bringing to mind the plaster casts which were the first objects in this museum’s collection. 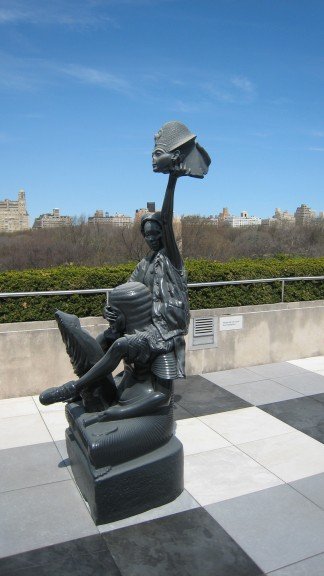 African woman with her trophy head of Tutankhamen, straddling an ancient Egyptian scribe as she covers his eyes with her fingers.

That color theme of black and white signals that this work contains the artist’s commentary on a current political issues including racism, gender inequalities, sexual preferences, colonialism — in general, the inequalities based on a history of oppression.  For example, in a black statue (left and below) an African woman holds a trophy — the head of the Egyptian Pharaoh Tutankhamen, from a sculptured head of Tutankhamen in the Metropolitan Museum (directly below).  It looks like she’s just decapitated him and is holding his head up in triumph.  She also seems to be displaying his head to sell — hawking her wares in the market.  She’s intact and alive in the sense of created from a living model while in symbolic contrast, the pharaoh’s head is fragmented and from a “dead” sculpture. 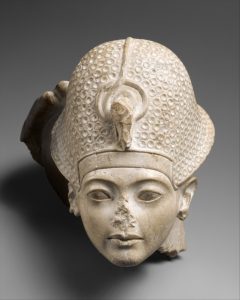 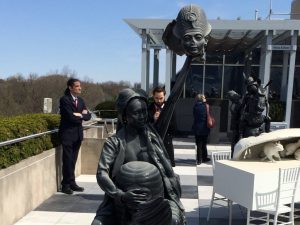 African Woman with the head of Pharoah Tutankhamen, detail.

The African woman sits with her legs straddling another Egyptian figure, an ancient sculptured scribe.  What a humiliating image of a man of a profession so often honored — scribe, a man of learning, a preserver of history. 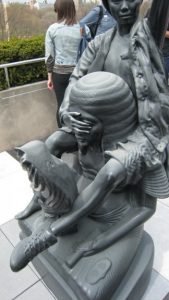 Detail from sculpture of African woman holding head of Tutankhamen.

To top off his humiliation, her fingers, alluringly delicate, cover his eyes. conveying through ages-old symbolism that he is blinded to truth. She owns the truth now, she owns the past.

The powdery “dust” that covers the black figures, and that links them visually with the white banquet vignettes, calls to mind Duchamp’s embrace of the dust that settled on his groundbreaking The Bride Stripped Bare of her Bachelors, Even — one of many thought-provoking touches of conversation between artists in The Theater of Disappearance.  Each of these vignettes is a full sculpture in itself. 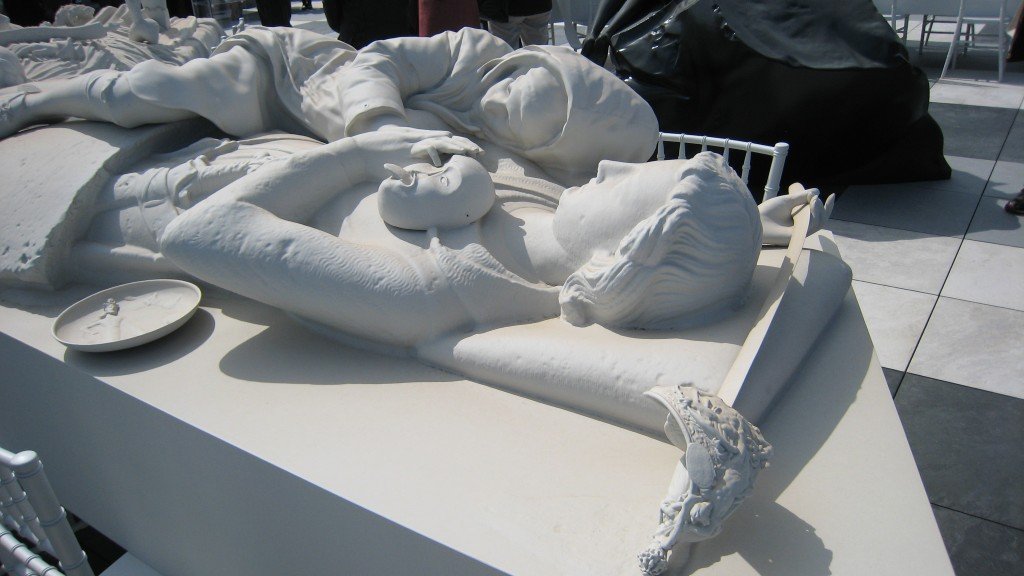 An effigy lies atop a table serving as a sarcophagus, with a sleeping figure beside him, and a mask with tongue sticking out on hischest.

Vitality marks the black figures: in contrast, walking among the white tables is like visiting Romeo and Juliette’s crypt.  The “banquet” tables become sarcophagi topped with effigies. One effigy lies with a sleeping though “live” cloaked figure beside him (right).  The mocking mask on his chest sticks out its tongue. 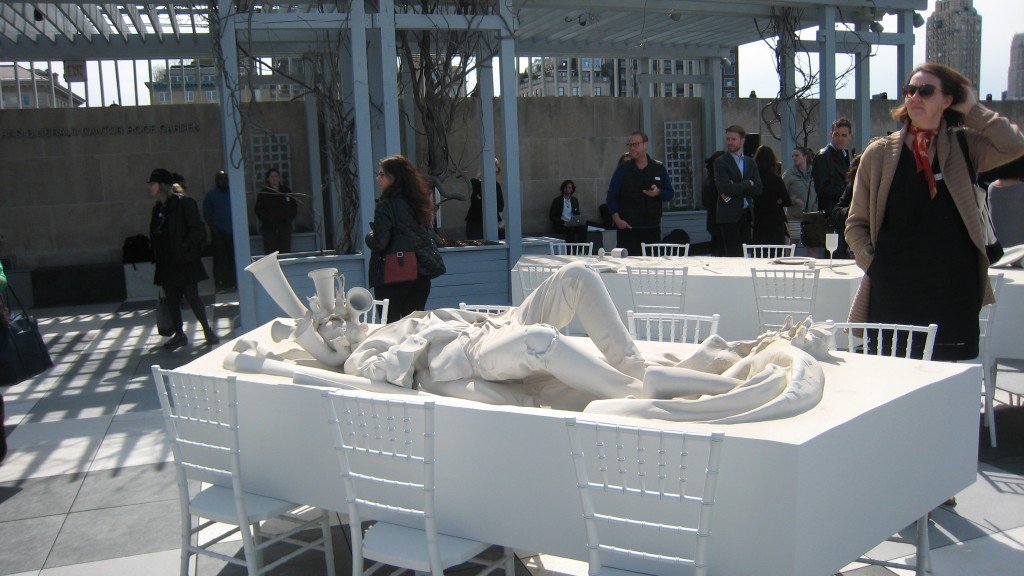 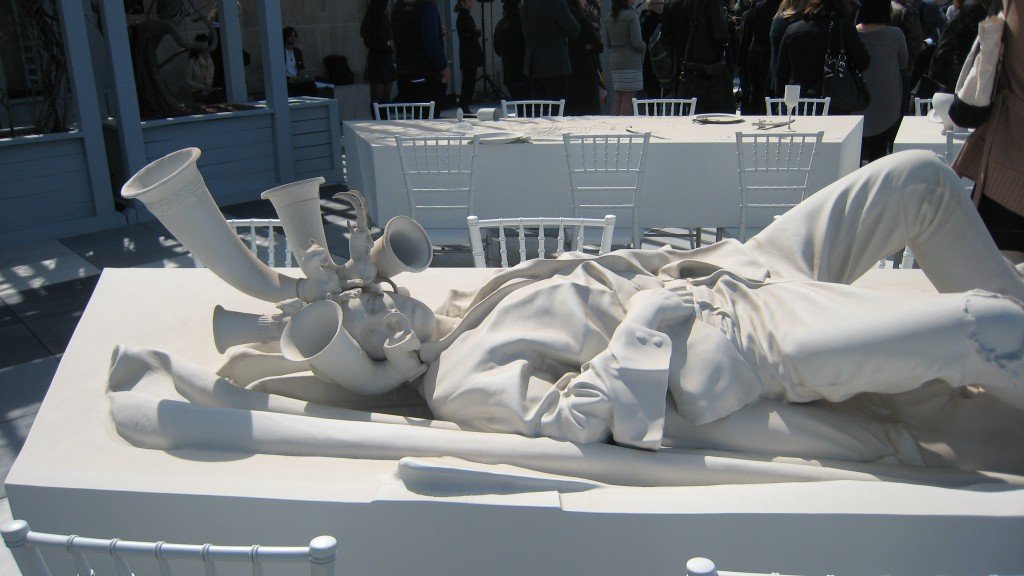 One of these — my favorite — suggests a state of decomposition like early “transi” tomb sculptures that show the transition from intact body to a decomposed state — only instead of worms and beetles crawling in, out and over him, there are musical instruments, leading to what I take as the artist’s musical pun — I’ve tried to bring home the point and highlight the artist’s wit by captioning the photo  “A Musical Decomposition.” 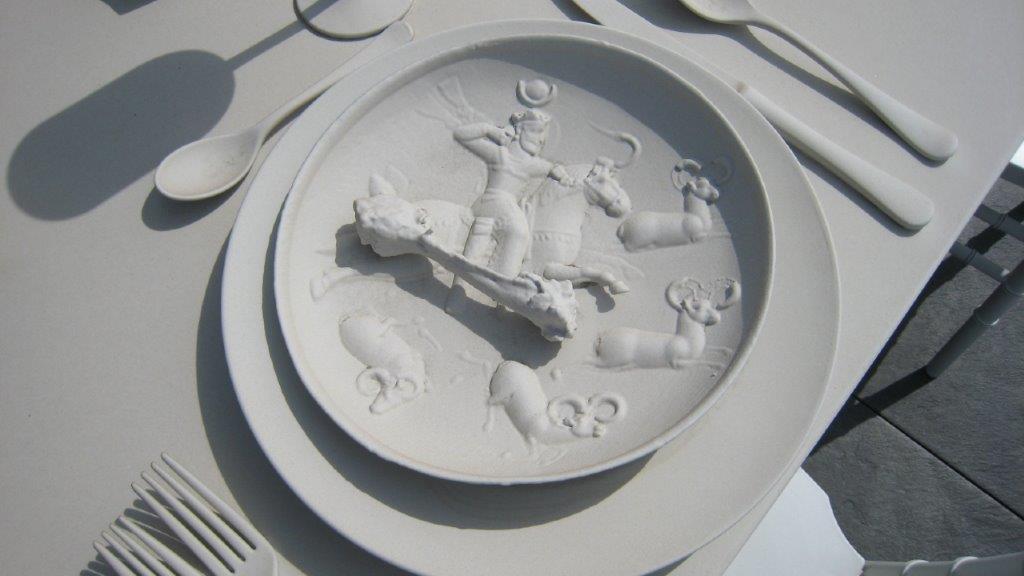 “Sasanian Plate” from The Theater of Disappearance,  with bare animal bone.

Comparing a banquet vignette (right) with  a Sasanian (ancient Persian) silver plate of the 5th century A.D. (below) shows a way the artist alters art objects to make his points, here about our exploitation of the planet and its resources — the way we’ve bled them dry.  In the ancient plate, the King, dominant, central and 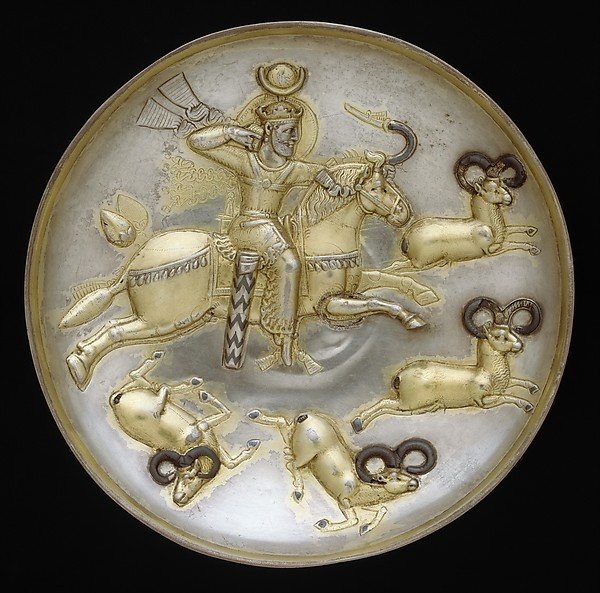 Huge in scale, hunts wild rams under the auspices of the sun and moon — the gods. The scene applauds his mastery, shows his nearness to the gods and conveys his might, skill and control. Two rams are hit, and he’s about to kill the other two.  It’s a celebration of mastery over the wild. Rojas incorporates that plate into The Theater of Disappearance (above) but there’s nothing left to celebrate — just a single animal bone — eaten, finished, done. We’ve exploited the wild until all that’s left are the bare bones –and the memory of it.  The party’s over. and we’re left with empty plates.  At least at the all-white banquet that, Rojas tells us, has lasted too long.  Among the black sculptures, live appears more juicy and promising. 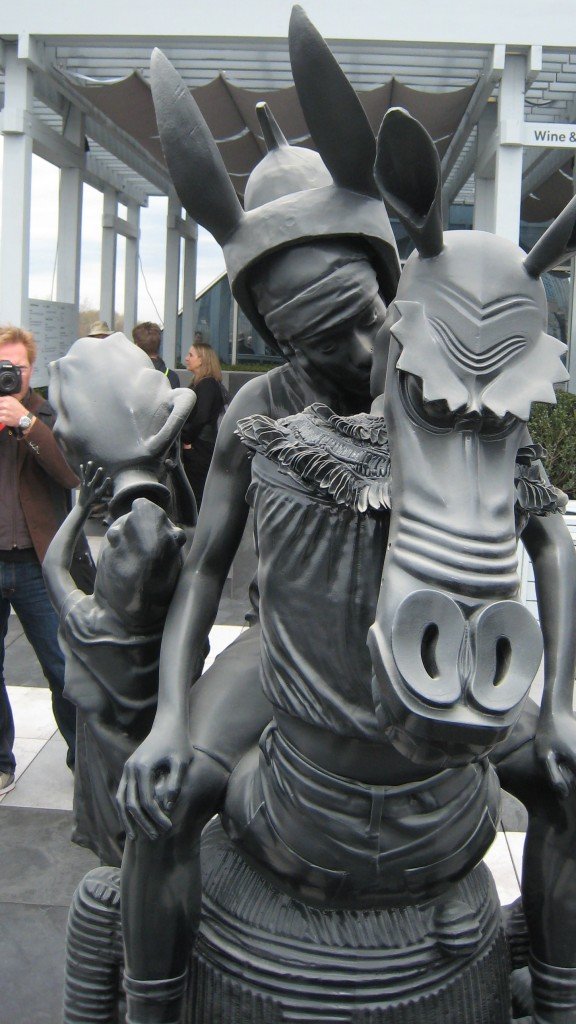 Which raises the question:  is it possible in 2017 in the middle of New York City at the Metropolitan Museum to mount an exhibition with the color theme of black and white that doesn’t address issues of race, racial history, racial animosities as well as other concerns of social justice?  The emphatic answer given by this exhibition, at least, is “no.”  (And how the NY Times in its two reviews of The Theater of Disappearance missed it is beyond me.)

This sculptural ensemble has the fascination of ancient Pompeii, a living moment captured for all time — but in reverse.  Drawing upon art from many periods and places,  it captures all time for the moment. Ambiguities are everywhere.  The past disappears, yet we can’t escape it.  Every inch of this exhibition is alive with insight and stimulates thought.

The Theater of Disappearance will be on exhibition of the roof of the Metropolitan Museum of Art, NYC, through October 29,2017.  For more information on the exhibition and on visiting the museum, click here.

My words alone cannot give justice to this extraordinarily important work of art that now sits upon the roof of the Metropolitan Museum of Art. Each one of the objects, scenes, displays contains as so much in terms of its origins and the messages. To really understand one must spend hours just trying to piece things together. This is an exhibition which must be made permanent. I will be saddened when it closes for there cannot be not enough people seeing and being changed by this supreme work of art. I agree with you concerning how the New York Times… Read more »

This is a marvelous write up. The museum’s interpretative materials are lacking and your insight adds richness to the experience.

oh wow…yvonne, you are bringing this alive…thank you for sharing your insight into the meaning of this exhibit…

For once I am not too late. I am really looking forward to checking this out. Thanks for the great review.

To A.S. — I’d be really interested to know what you think when you see it.