“Sometimes there is no why … ” The Mariner

In Albatross, Benjamin Evett gives us a surpassing performance in a magnificent play.

Alone on the stage, Benjamin Evett contends with the wind and waves, the details of his ship’s rigging, loneliness, madness, thirst, hunger, loss, memories, yearnings, cruelty, and the guilt of having caused the arbitrary death of an innocent, friendly creature.  His is an ultimate human voyage.  We are lucky to have so compelling an actor as Evett to take us on this journey:  he keeps us tight beside him all the way. 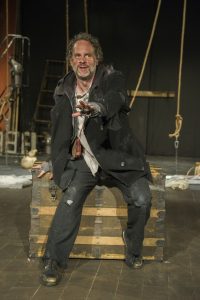 This play seeks to tell us the whole story of the Mariner, what it was really like – what Coleridge’s Romantic poem didn’t tell us.  We learn how the Mariner came to go on the voyage in the first place, and what happened after.  Albatross conveys more fully and in specific detail the true brutality of life on an eighteenth-century ship and, going beyond Coleridge’s narrated events, it finds the words to convey the Mariner’s intense inner experiences.

The charming, humorous, weary Mariner begins by hoisting the patched, time-worn sails of the ship, which forms the time and journey evocative setting for the play, and he introduces the mysterious fact that he has told this tale many times over the centuries, and will tell it again.

Before the fateful voyage, the Mariner, by profession a ship’s navigator, was living in shabby circumstances with his wife, whom he was sick of, and his beloved young son, feverish with an unknown illness.  A trip to the pub, a drunken evening, and he’s shanghaied on to the ship of Black Dog, who’s as brutally cruel a captain as has ever been written. “Even the Spanish Inquisition,” the Mariner tells us, “was no match for Black Dog!”  Well, it depends how you feel about people who bite off noses.

Out of Bristol, England, the ship sails south until, chasing a mysterious Spanish galleon, it sails farther than intended, farther south than any ship has ever reached. Our Mariner has lost the way.  The ship’s crew find themselves locked within icy walls “on the bottom of  the goddamn world,” facing a frozen death.  But a great bird with a wing span of 12 feet, an albatross, appears, and leads them them out of their icy rimed trap (a “rime” it turns out, is also a white icy crust that forms in a fast freeze).  The Mariner feeds the albatross, the bird comes every day.  “Days go by an’ he becomes like … a little part’ a me” as his son had been a part of him.  Then,  one day, off-duty, on deck taking target practice with his bow, he turn, shoots and kills the albatross. 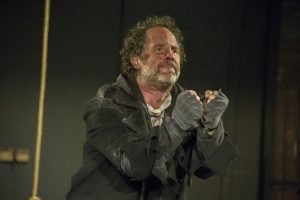 Immediately afterwards he pleads to understand, “Why?  WHY?  WHY?  TELL ME WHY?”

Ice and fire — now sailing north out of the trap, the ship is becalmed under a blazing sun and the men become desperate for water.  Half mad with thirst, they encounter, again, a Spanish galleon with only two figures aboard, playing dice: Death, a man, and Life-in-Death, a woman.  You might say Death wins because the 200 men on the mariner’s ship shortly die of thirst, but Life-in-Death claims she’s the winner because she wins the fate of the Mariner: he will never die, his penance for his crime against nature will never be fulfilled, and he must live to tell and retell his story through the centuries.  And he has yet to get home.

What courage to take on a famous, iconic poem, what confidence of vision! These contemporary authors meet that challenge fully. This play is written with a passionate, raw, vernacular poetry of its own that makes the telling of the story near-to-overwhelming.  As the Mariner suggests, Coleridge’s rhyming verses muffle grim realities.  Great for its time, but “Industrial revolution.  Global Imperialism.  World Wars.  Cold Wars.  Cyber Wars.  … Today,” the Mariner declares, “people want more.”

Albatross takes us on a journey in search of human nature, and Coleridge’s philosophical invention, the killing of the admirable bird, remains the creative nugget. The authors of Albatross share Coleridge’s frightening and only partly tempered view: humans are prone to destroy. The deathless Mariner continues to tell the story and the Albatross brings it up-to-date.  The play draws upon the pointless killing of the innocent creature to convey our contemporary situation where, it seems, the whole natural world has fallen victim to our species. (To the authors:  I’ll never forget that blue bottle cap.)

Albatross, with set design by Cristina Todesco, costumes by Frances McSherry, light and projections design by Garret Herzig and sound design by Rick Lombardo, is directed by Rick Lombardo, and produced by Michael Seiden.  Albatross plays at 59E59 Theaters in mid-town Manhattan through February 12, 2017.  For more information and tickets, click here.

thank you, Yvonne, for encouraging us to go to this superb play. Your review is ever so much better than the New York Times review, which sadly missed the power of the play itself and the compelling acting.

Am I ever glad that turned out to be a success for you — as in “whew!”

What great theater – this was a myth retold and made contemporary without losing any of its universality. The performance is compelling – seldom does one have the privilege of witnessing such a transformation through time and space by one person buttressed by a set with a minimum of props, superbly augmented by the visual projections. What will Mr. Evett do next?