I wanted to see Consider the Lilies because Austin Pendleton is such a fascinating actor to watch:  he didn’t disappoint here, but he’s the main element of interest. (Pendleton is also a fine director, though he didn’t direct this play.) 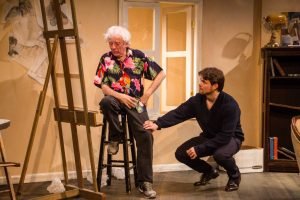 This is basically a two-person play. Paul an elderly, talented painter (Pendleton) has lost his creative way, while a young man, his agent, David (Eric Joshua Davis) believes in him and urges him to produce more paintings.  They’re in Paris for a gallery opening David has arranged for Paul’s painting.  The play centers around the artist and agent but – far more than business – their relationship is one of complex bonding and emotional dependency.  As old and scruffy as he is, Paul, who is bi-sexual is seeking to seduce David who’s sure he isn’t gay (though Paul thinks he knows better.)

A question that runs through ones mind while watching the play:  can such a scruffy, unkempt-to-verging-on-repulsive old man really think he can seduce such a good-looking young guy?  We’re talking not just about bedding down but falling in love. 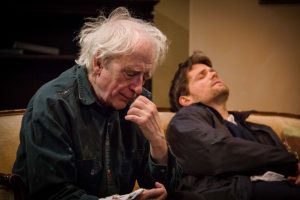 The idea has excellent credentials and goes back a long way.  Think of the beautiful, young (and rich and aristocratic) Alcibiades enamored of ugly, old Socrates in Plato’s Symposium.   An iconic example in modern theater is the seduction of a young writer by the powerfully willed, tubercular old man in Tennessee Williams’ great play, Vieux Carreﹶ , which Pendleton directed a few years back in a Pearl Theater production.  And recently Pendleton acted in a role similar to Paul, in Ira Lewis’ Chinese Coffee – and old and seductive mentor to a handsome young man, though here it’s the younger man who has the genuine talent.

The characters are given to repeating in claustrophobic loops rather than advancing.  Themes are introduced such as abandoned children and uncaring parents, and new characters are brought in to keep the drama going:  a violent thief, a successful painter-of-the-moment who gives Paul some tips, and an unfaithful girl-friend, but the situations and language veer toward commonplace (the play could benefit from a red pencil).  The resolution is arbitrary, whether you see it as positive or negative.

Consider the Lilies plays at TBG Theatre in Manhattan’s Chelsea district through January 28, 2017.

How long was this play? Entirely toooooo long. Even Pendleton has a finite number of palettes.

I sat through this travesty of a play. Although Pendleton was good – that’s where the evening began and ended. The various intended plots are fabricated, the emotions are basic soap opera and all in all it was an evening to forget.