Written 2,400 years ago by a Greek, The Trojan Women takes the point of view of the enemy – the Trojans of Homer’s epic Iliad.  How is that for astonishing?  Written by a man, it takes the point of view of women – the defenseless mothers and wives who, with the defeat of Troy, are to be taken as war booty.  Bewildered and despairing in war’s cruel aftermath, the Trojan women question the sanity and the existence of the gods. They lose the future.  They confront a world with no purpose.   How is that – all that — for daring?

In this adaptation by Ellen McLaughlin, the women of Troy, sleeping fitfully, are soon awakened to hear which woman will be taken off by which Greek.  These highborn women lament their futures based on what slaves always do:  from concubines to floor scrubbers to chicken feeders to taking care of other women’s children. 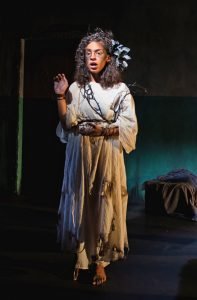 But among the women Cassandra the Seer, who will go to Greece as  Agamemnon’s  concubine, predicts the future through a different prism:  that of inference based on evidence.  Ten years ago Agamemnon, tricking his wife Clytaemnestra, had murdered –i. e. “sacrificed” to the gods” — their daughter in order to raise favorable winds to sail to Troy.  Clearly, as Cassandra reasons, upon his return to Greece, Clytaemnstra will kill Agamenon in revenge, and kill the concubine he brings home – Cassandra.  Eurpides transforms Cassandra from a Seer traditionally dependent on divine inspiration to speak the future (though not believed), into one who tells the future through reasoning – through her human intelligence.  So much for the gods.  And there it is — Greek humanism. 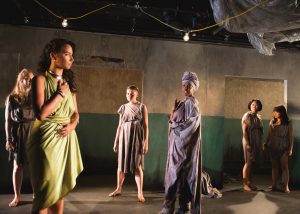 When the Trojan women turn viciously on Helen of Troy, the ultimate cause of all their grief, Euripides provides a comparably brilliant inversion of Helen’s character.  She, like Cassandra, becomes a fast-talking logician but – true to character and in ironic contrast to Cassandra — in her selfish interest.

In a usual pattern of conquest, the Greeks, of course, can’t afford to let live the son of Hector, the greatest fighter of the Greeks.  The irony of what his mother Andromache says, in the moments before the child is literally ripped from her arms, is breathtaking. 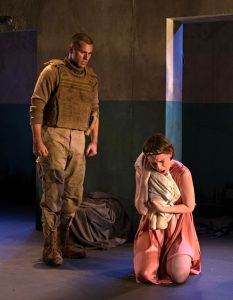 Irony and tragedy. Phil Feldman as Talthybius and Casey Wortmann as Andromache with her child. Photo Allison Stock.

The current production at the Flea makes the play, that is a cascade of dramatically intense situations, action and ideas, seem static.  The directing depends on outdated ideas of what Greek tragedy should look like and sound like rather than on a direct confrontation with the text.  The set and costuming are burdened by the same unimaginative vision.   The Bats, the Flea’s young repertory actors who have been brilliant in every past production I’ve seen, are here, like the rest of the production, burdened by the obvious.

These actors speak, however, with clarity and projection, and if you go, you will hear every word – and that’s worth plenty!  This production can be experienced as a kind of dramatic reading, which is one very good way to get to know a play.  In fact, this adaptation was originally presented as a staged reading at Classic Stage Company in Manhattan in 1996, and some of that format may cling to it.  In her adaptation, McLaughlin simplified the play somewhat and — much to the purpose of a staged reading – has individuals speak lines drawn from the unified Chorus that Euripides wrote.  An iconic anti-war play, The Trojan Women has often been performed in response to specific wars, and this adaptation was developed in collaboration with the Balkan Theater Project in response to the Bosnian War, and refugees from that war performed the Classic Stage production.

The highest irony meets the highest tragedy in The Trojan Women.  Some reviewers of this production suggest there’s something inherently static about Euripides’ play – don’t believe it!  The play is a cascade of dramatically intense situations, actions and ideas as the productions by  Elizabeth Swados and Andrei Serban at La Mama fully demonstrated — among the most thrilling, dynamic, action-filled theater I’ve seen.

Ancient Greek playwrights were thought of as teachers, and in writing this play Euripides was critiquing his own people, the Athenians in attendance at the city dramatic festival, for their brutal depredations in the course of the Peloponnesian War.  That the lesson wasn’t learned, and has never been learned, is part of Euripides’ tragic awareness.  The play starts with the god Poseidon’s words, “Another war has ended.”  And then immediately, “When will the next begin?”

The Trojan Women plays at the Flea Theater in Manhattan’s Tribeca district through September 30,2016.  For more information and tickets, click here.

This analysis articulates what for many may be subliminal perception of the messages, Euripides’ “lessons.” Now I’d like to see it again to savor the richness of this timeless drama.