The idea is that Vincent van Gogh has recently died and his brother Theo, the art dealer who loved and supported that brilliant artist, was so overcome at the time that he’d been unable to speak at Vincent’s funeral.  It’s two weeks later, and Theo is impelled, now, to tell us what he thinks he knows about Vincent that others don’t. He thereupon sets out to tell us about Vincent’s early life, his development as an artist and his death by his own hand.  It’s hard to make any telling of Vincent’s life dull but that almost happens here because Theo’s recital stays on the surface of the facts as they’re known, and offers no special insight. 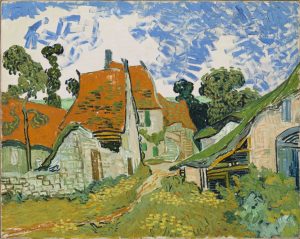 I say “almost” because van Gogh’s story is so saturated with drama that any account of his life, based largely on Vincent’s brilliant letters, is bound to have some stimulating moments.

For instance:  the audience seemed to catch its collective breath hearing that Vincent was born a year to the day after his mother had given birth to a stillborn son, who also had been named Vincent, so that the artist carried the name of his dead brother throughout his life.  If you didn’t know that – and even if you did – it’s startling.  The play takes up one way among many this has sometimes been considered, seeing a link in it to the theme of resurrection in van Gogh’s thinking and art.

And Vincent van Gogh’s self-defeating and troubled relationships with women including the prostitute Sien, described here in a straightforward way, are always interesting to contemplate.

But what did Theo have to tell us about Vincent that we didn’t know? That Vincent was “not mad.”  Theo emphasizes instead that van Gogh was sick, referring to the diagnosis of epilepsy Vincent received during his lifetime.  For most (though not all) who have considered this, myself included, there’s no argument that Vincent suffered from epilepsy, but what Theo has to say is simplistic, because Vincent’s difficulties went beyond any single diagnosis.

With Vincent van Gogh, there are always multiple causations one can bring to bear in trying to explain his eccentricities, difficulties getting along with others, bizarre behavior, and great suffering.  Dead brother, depressed mother, epilepsy, alcohol, paint fumes, cigarettes, religious alienation, developmental issues, etc.  It’s particularly characteristic of van Gogh that where any one explanation would be plenty to do the job, there are several!  There are disagreements about their various impacts, but it’s over simple to “blame” it all on epilepsy.  And whatever the “madness” may have been, there was probably a dose of that too.

With the charismatic and talented Leonard Nimoy in the role of Theo, the pedestrian character of the script might have been more masked.  Briggs works hard to insert “passion” into the narration, as when he shows us Vincent as a preacher delivering his powerful “stranger on the earth” sermon, but one feels the strain on his capacity as an actor.  With an underlying western accent, and contemporary mannerisms, he’s also unconvincing as a sophisticated European of the late 19th century art world.

The set includes the study of the citified art dealer Theo van Gogh on one side, and Vincent’s more rustic room on the other, with Theo ranging between them.  The floor boards on Theo’s side are varnished and those on Vincent’s side unfinished – a nice touch.  The projection of van Gogh’s paintings onto the back of the set, as if in an enlarged frame, is less successful because the poor quality of the slides does not do justice to the paintings, which come off looking like flat posters.  And it’s just a plain wrong idea to at times manipulate the paintings so they or parts of them are projected backwards.

As the person in the seat next to mine said on leaving, “Well, I learned something.”  But that’s about it.  Which is worth something, but not all that we look for in theater.

Leonard Nimoy’s Vincent produced by Starry Night Theater Company, a play that has toured in other cities, plays in Manhattan at the Theatre at St. Clements on West 46th Street through June 5, 2016.  For more information and tickets, click here.

Oh my! I had great expectations but it looks like they’re diminished. It’s unfortunate that the play dealt so superficially with complexities of one of the great artist of all times.