This is a play about the founding of the Federal Reserve Bank.  How’s that for an unlikely subject for a comedy!

The story is of a brief, exhilarating moment in American politics.  In the aftermath of the run on the banks of 1907, progressives of all kinds saw promise for economic development and equity in the idea of a federal central bank,  Soon, however, the progressive movement splintered, and anyhow, the big money men took over the central bank for their own profit. 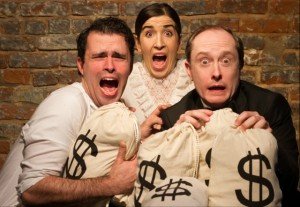 Since the Federal Reserve Bank was officially founded in 1913, the play takes us back to the early years of the 20th century and styles itself like a silent movie (though with talking).  Quick scenes are separated by actors who parade the time and place of the next scene on a board.   The style is wittily carried out – it’s fun.  If there was music, it would be Scott Joplin.

In Chicago in 1910, a handsome, young Italian immigrant, Sully (Michael Ziabinger), manufactures really excellent steam boilers, but because of prejudice can’t get a bank loan to grow his business.  Sully falls in love with a beautiful suffragette, Louisa (Rachel Mewbron) while installing her boiler.  She keeps his ardor at a distance but engages him in reform politics where he becomes a labor leader and meets the other reformers of the time – trade unionists, social workers, suffragists, socialists, and “a man of peace” who, whether in the play or mentioned, are mostly real figures of history.

Passionate as they are for their particular causes, the reformers have trouble sticking together on the Federal Reserve Bank project.  You might guess that the bankers were better organized.  But there’s always room for love to conquer all, and trickle-down or not, the American economy was on a roll.

The performers, most of whom take on multiple rolls, are polished, talented, witty, and brightly paced by the director Shana Solomon.  Most of the characters are amusing types but Sully and Louisa are full characters.  Michael Ziabinger is outstanding, conveying Sully’s upbeat can-do personality combined with intelligence, humor and depth.  A native American speaker, Ziabinger’s worked up an enchanting Italian accent that adds to his charismatic charm.  Rachel Mewbron as the lovely Louisa conveys her character’s stalwart determination to keep her goals as a suffragette first, until love, too, has to find its place.

I went to Like Money In The Bank because the subject was unusual and there was the chance to learn something about, gosh, the Federal Reserve Bank.  The play is provocative but doesn’t clarify anything about the bank.  What I did learn (with some after-googling) is that the whole subject of the Bank and its founding is extremely obfuscated, and almost impossible to understand if you’re not an economist – or a banker.  I wonder why???

Like Money In The Bank is 90 minutes without intermission.  It plays at Theatre Row Studio Theatre on Manhattan’s West 42nd Street through April 22, 2016.  For more information and tickets, click here.

This was a pleasure to watch but also begins to enlighten about what really occurred with the founding of the Federal Reserve system. It wasn’t just Jekel Island but a populist movement that became almost erased from history. The playwright is to be congratulated in doing the research and writing this play which resuscitates a lost but important episode in American history. It was a very enjoyable evening.