This richly characterized and surprising play by a pioneering Irish woman playwright tells us that —– women without men are a very sad lot!  It’s a fine play though.

The teachers’ lounge of Malyn Park, a private girls’ Protestant boarding school in Ireland in 1937-38 is a hothouse of intense interactions, especially when a new hire, the pretty, young Jean Wade, joins those who’ve been teaching classes and grading papers there “forever.” 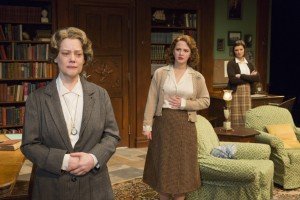 Perky, modern Jean soon rubs almost everybody the wrong way.  Her missteps with the entrenched teachers and clashes with their idiosyncracies are amusing – for us, but they get Jean into a lot of hot water with other denizens of the teachers’ lounge.

Jean’s vivacity and can-do approach – she gets the girls involved in putting on a play – make her the students’ favorite — and the target of Ruby Ridgeway, who was the previous favorite teacher.   Then there’s prissy Miss Connor, who has been working for twenty years on a manuscript compiling “beautiful acts” that people do, and who senses at once – correctly — the new and more sophisticated teacher’s dismissal of this life work.  Margaret Willoughby, played with witty nastiness by Aedin Moloney,  throws catty remarks in Jean’s direction, too, but she’s a teacher with nasty remarks for everybody, including her students. 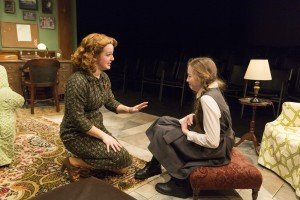 “Politics” erupt here, as everywhere humans gather, and part of the humor and touching quality of this play is that the turf wars, jockeying for advantage, and general animosities are as hot and tenacious in the teachers’ lounge of a small girls’ school as they are on the global scale.

But what is remarkable, and unlike most political situations, is that there are no alliances.  Nobody is friends here.  The intelligent Miss Strong appreciates Jean’s youthful optimism and can-do spirit but has perfected keeping out of the tempests in this teapot as her way to survive.  Thus, at the play’s dramatic turning point, when Jean is accused of doing something mean, vile and destructive, the best Miss Strong can do in the face of damning evidence is withhold her judgment:  she’s not a true ally.

Something mean, vile and destructive has indeed happened, Miss Connor is the victim, and the play takes on some of the character of a whodunit.  Although all evidence and animosity point to Jean as the perpetrator, we know she didn’t do it and have a pretty good idea of who did.  The suspense lies in how she will clear her name.

And the special brilliance of the play is that she doesn’t!

The unexpected plot twist is based partly on Jean’s goodness of character, but equally on her arrogantly stated view that what happens among this group of women without men, although of intense personal importance, doesn’t matter at all to anybody in the larger world.   Her salvation:  none other than her fiancé waiting outside to take her away forever in a fine car. 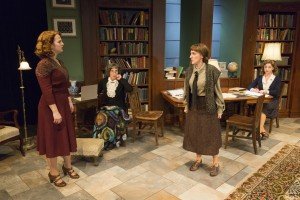 It’s exciting, and redeeming for the play, that the main character focus shifts:  we’d thought all along that it was Jean but it turns out to be Miss Connor, the fussy deluded “author” who had tried to do Jean in.  Following Jean’s lead, we’d learned to dismiss Miss Connor, to distrust her and to dislike her yet, by the end, she has our full compassion.  It comes as a surprise but this is Miss Connor’s story.   That’s a remarkable feat of characterization for the playwright, and also for Kellie Overbey in the roll of Miss Connor who draws us deeply into this lonely woman’s heart.

Among the beautifully acted roles in this ensemble play, Emily Walton exudes youthful energy and certainty as Jean Wade.  Mary Bacon barely lets you see the cracked heart behind the practiced detachment with which she navigates the teachers’ lounge, and her life.  Dee Pelletier is funny and moving as the French teacher, Mademoiselle Vernier, her isolation compounded by coming from elsewhere.  Kate Middleton conveys the controlled rage of being pushed aside as favorite teacher by Jean, while continuing to do her job.  In a sense all these women have been pushed aside, and continue to do their jobs, and Women Without Men makes us feel the heroism in that.

Alexa Shae Niziak conveys the complexity of Peggy Summers, a talented actress for the school play, with a school girl crush on Jean and – almost a bad seed – irrepressibly transgressive.  Shannon Harrington makes us smile with her seriousness as King John in the school play.

Thanks to the Mint Theater, and to Producing Artistic Director Jonathan Bank, for producing this little known play, and introducing us to the paradoxes in this work by a successful pioneer woman playwright. Hazel Ellis acted for Dublin’s Gate Theatre and, evidently to everyone’s surprise, became the author of two successful plays, Portrait in Marble, about Lord Byron, of 1936, and Women Without Men of 1938 – and no more plays after that.

In Women Without Men, although they may try to evade it, the lot of unmarried women is lonely and sad with friendships among women elusive.  Jean is the lucky one—she has a fiancé to rescue her, so it’s surely not a “feminist” play. But the true test is in the work:  Hazel Ellis has given us a fine and compelling play.

It’s not just “Who knew?” when one sees a superb production of little known works from the past produced by the Mint – it’s “Thank Heavens we know now”!

When I first read about this play I was somewhat put off about going to see it — however now with what you describe as this excellent characterization of different personalities and how they interact puts this high on my list. That we have a knight in white shining armor (deus ex machina) coming to the rescue – well that may have been the 1930s but today it might be somewhat different. However that was the reality at that time.