Thomas Hart Benton’s murals, America Today, have an immediate impact of color, exuberance, and resonant ideas.  Urban and rural, old ways and new, labor and entertainment, freedom and oppression, rich, poor, and all the way through the middle:  the view is so wide and comprehensive it seems to really encompass, in broad strokes and specifics, the essence of America in a defining view.  At the same time, the murals span in spirit two epochs  — the excesses and abundance of the “Jazz Age” of the 20’s, formative for Benton’s imagination, and the bitter advance of the Great Depression. 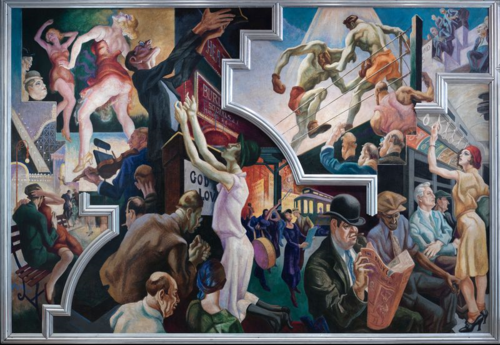 City Activities with Subway. Photos are courtesy of the Metropolitan Museum of Art

The panels were painted in 1930-31 for the Board Room of the New School of Social Research in New York City and ultimately purchased by Equitable Life — AXA.  Here they are, a stunning gift to the Metropolitan Museum from AXA, and installed in their original arrangement in this exhibition.

The ten panels, most of which about seven-and-a-half feet high and nine feet or more wide are painted in egg tempera with an oil glaze, for strong colors, broad modulations and gleaming surfaces.  Aluminum partial frames, complex moldings with alternating curves and right angles, boldly  define vignettes within the panels and add an emphatic strength. 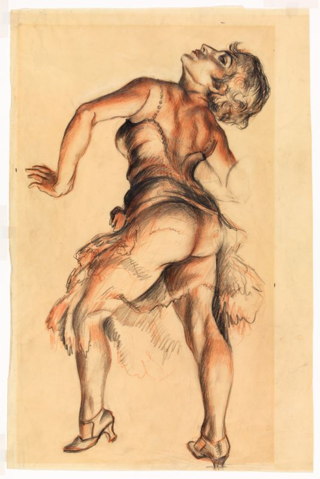 City Activities with Subway (above) thrusts us into “the color and tempo of the Jazz age,” in Benton’s words — night clubs, city streets with preaching evangelists, evangelists, park benches with lovers, the subways, the boxing match.  Among the rich trove of Benton’s drawings in the exhibition that are related to the murals is the Dancer, you can see where she finally arrives in the upper left of City Activities with Subway (above).

The times they are a-changing in the Midwest  (below) where activities of corn production, taking their vertical direction from the corn growing in the fields, are juxtaposed with the dynamic diagonals of the scenes of clearing  the land.  Progress here has — if not as a double edged sword — a ferocious looking  cross cut saw with lance teeth.

Being an animal lover, I took a close look at that sow near the bottom edge of the painting:  she’s dark, lean and with a long snout — closer to wild pigs than the flat-faced pigs we have today, and she’s rooting outdoors with her piglets, not in a tight brood crate.  A wonderful drawing Benton did of the pig and piglets in the 1920’s, well before the murals were conceived, is in the exhibition — it’s a fine example of how Benton drew from his earlier experiences and travels in designing America Today. 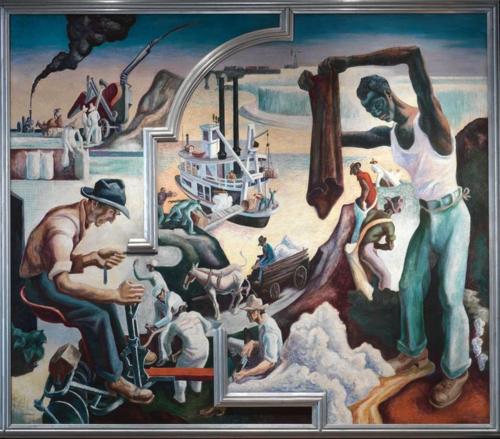 Things seem to be changing more slowly in Deep South (where cotton is still the main crop although rice  is taking hold.  The White man at left is seated working on the machinery, the Black man at right, one of Benton’s several monumental figures of laborers, stands emptying the sack of cotton (suggesting the past and slavery’s end?  An end of cotton?).  The most back-breaking work is relegated to prisoners planting seed, overseen by a man seated with the rifle. 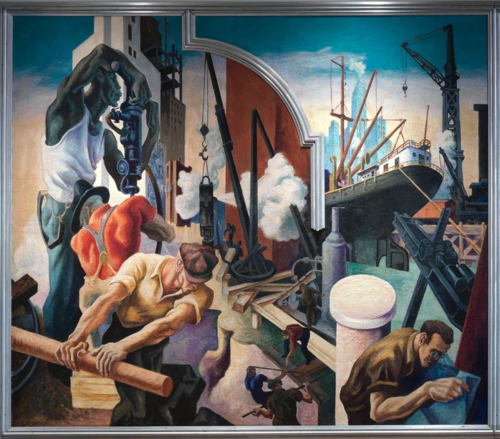 In the mural of City Building, the Black man far left with a drill forms a pendant to the man emptying the bag of cotton:  but he’s a city man,  with suspenders instead of a rope belt, and he’s the one running the
machinery now.

You can see behind the ship an early representation of New York City’s developing skyscraper skyline, before the Chrysler Building and Empire State Building became iconic.

Benton studied the full production of steel at a Bethlehem Steel plan, which 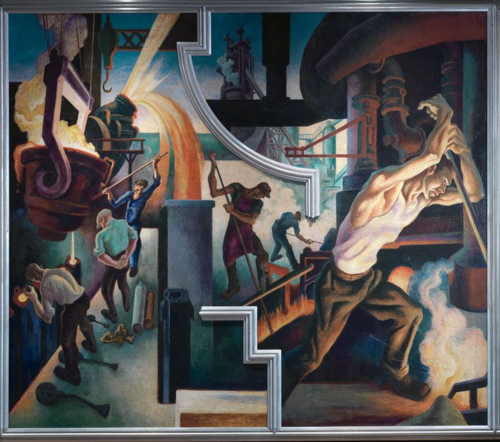 he represents in the panel Steel. At the time, Jackson Pollock was a studio assistant for Benton, and appears as the model for the worker spotlit by the furnace he’s stoking (the museum, with good caution, says  Pollock was “likely” the model — Pollock was on hand, and it looks like the young Pollock).  Although Benton is a representational painter and Pollock paintings are often non-objective, Pollock was inspired by Benton in developing his totally charged surfaces — his all-over-the-painting energy.

Instruments of Power , the largest and most abstract panel, provides a tough fulcrum for the whole series. It recalls the Italian Futurist movement of the early 20th century with its dynamic diagonals that seem almost to  break forward through the surface of the painting and in the optimism it exudes for technology’s promise of liberating human beings from grinding labor. It doesn’t, however, include the Futurist “lines of force” that suggest through repeated contours movement through space. 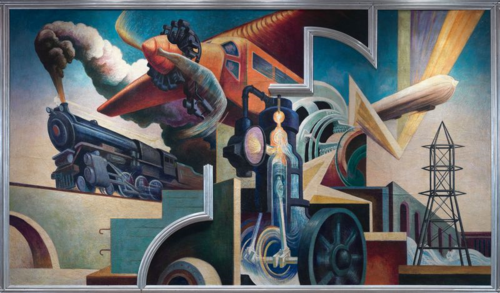 In a thought-provoking contrast, Benton includes in Instruments of Power an empty, receding colonnade on the far lower right, a classical touch amid aggressive modernity.  It’s in the style of Giorgio de Chirico, an Italian artist contemporary with the Futurists — but no one ever made stiller or more inward paintings.  Does the empty arcade, reflective of a lost past, suggest that all-powerful technology may leave human beings out — spiritually as well as out of work? Instruments of Power is the only painting in the series with no human figures.  I think that, through the nostalgic intrusion of the arcade, and the lack of human figures, Benton  probes the negative as well as positive aspects technology holds for human beings.

The murals are otherwise so filled with figures in such a variety of activities  they give an impression of being more comprehensive than they are.  Although they encompass several sections of the United States in Benton’s regionalist style, the paintings don’t take us to the West Coast, the only racial types represented are Whites and Blacks with the exception of one Native American in a bar scene in the mural called Changing West, and there are no very old people nor, with one exception, children.

The exception is the upright and intelligent little boy in the lower right of City Activities with Dance Hall (below), a portrait of Benton’s son on the lap of the artist’s wife, like a contemporary Madonna and Child.  And like the infant Christ (though with his left hand), the child raises his index finger, teaching more than being instructed. A study from life Benton made of his  son with that gesture is in the exhibition. 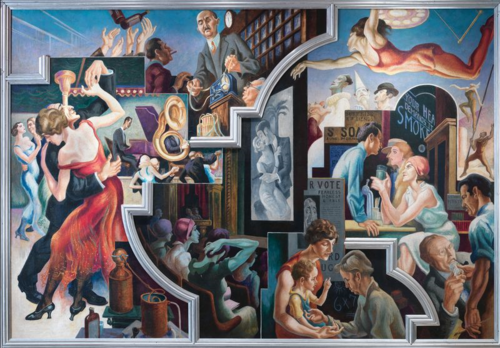 Evidently the child and teacher are working on arithmetic since there’s a chalk board behind them, with numbers “6 X 7” — the “answer” being 42, Benton’s age when he completed the murals.  And at the edge of this densely autobiographical corner is the artist’s self-portrait — sleeves rolled up for work, with the seated director of the New School.  In the upper right an acrobat flies through the air with the greatest of ease, a genie of amazing  human achievement.

The murals express the rich variety, sense of abundance, optimism and excess of the 1920’s, a time of Benton’s intellectual, moral and artistic development.  But the years Benton was at work on the murals marks the onset of the Great Depression.  Above the doorway, is a narrow lintel-like mural of Outreaching Hands:  through the contrast of hands, Benton tells the story as he understood it — the poor reaching for bread and coffee, and the plutocrats with top hats and white shirt cuffs grasping money.

The shiny metal partial frames, that create separate but flowing narrative vignettes, are a brilliant innovation, formally effective and filled with meaning.  They link this 20th-century wall cycle that focuses on ordinary people in their secular existence of work and entertainment with the great tradition of aristocratic and religious wall paintings and altar pieces.  While recalling the great European tradition, they draw a strong contrast with it.  These frames are aluminum, an industrial and “democratic” metal — not rare gold.  They’re open, not confining, just as Benton’s paintings chafe at hierarchy and include all classes of society.  In a novel leap — and way before the time — these frames also look forward to post-modern deconstructions that challenge the status quo in art and culture.

Benton spent six months conceiving and designing the murals and three months painting them — a gauge of the importance of mind in the creation of art. This room of the ten panels is an exhilarating, life affirming treasure.  Beyond the murals, the exhibition includes examples of Benton’s other work, including drawings related to America Today, and works by other artists in and around Benton’s time whose art is related in various ways to his.  This illuminating and exciting exhibition has been organized by curators Alice Pratt Brown and Randall Griffey: it is perfect.

The current exhibition of Benton’s America Today will be at the Metropolitan Museum of Art through April 19, 2015.  The museum posts prices for tickets that are suggested, not required — it’s wonderful to support this great institution but pay what you can — and go!

Review | Found: A New Musical | Directed by Lee Overtree | Based on the Found Books and Magazines by Davy Rothbart | Music and Original Lyrics by Eli Bolin | Book by Hunter Bell and Lee Overtree | Atlantic Theater Company

I wouldn’t go quite that far, but I certainly find them very exciting and to a good extent share your enthusiasm.

Thank you so much for illuminating so many of the wonderful aspects of this truly great work of art for I did not appreciate many of the messages incorporated in the murals and its framing. As you point out it took nine months to complete this, that to me is a very short period of time to have put so much into the space. As a consequence of your review I will go back and look at it some more with the deeper understanding of this and why it had such a positive impact upon me on my first viewing.… Read more »