This is a suspenseful play of psychological gamesmanship between an older mentor and a younger, less educated but talented writer.  The psychological unfolding is filled with suspense.  Jake (Pendleton), a 50-year old photographer and bookish older guy is weary and, as the play begins, tensely avoiding Harry (Walsh), 44 years old, who, just having lost a make-do job as a doorman, penniless, pushes in to Jake’s stifling apartment looking for some money Jake owes him. 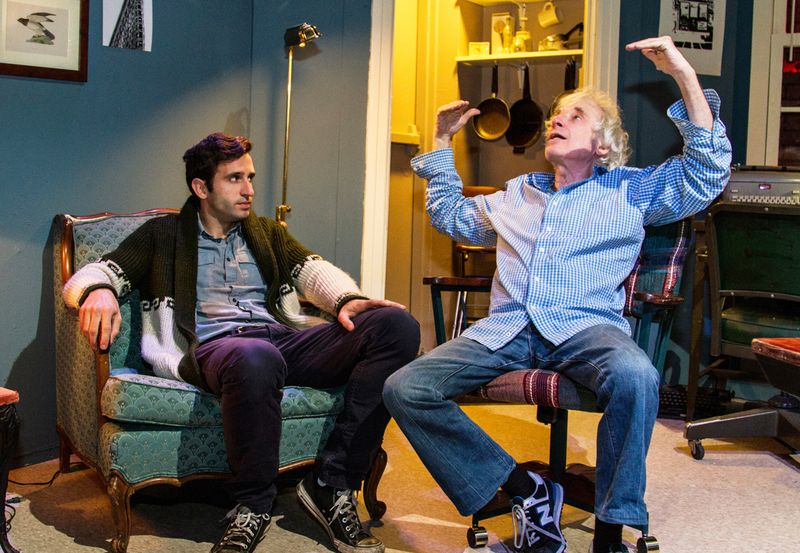 The two characters are contrasts in age and in attitudes toward life.  Jake, a photographer, seems to embrace poverty;  by the same token, he’s long ago left his wife.  Harry has had full and zesty love affairs, though in the end his girlfriends have left him because they couldn’t take his shabby existence.  Harry’s not averse to money either — on the contrary — but his sense of self, and inner conviction of his own talent,  won’t let him “bow and scrape” for it.

But, we learn gradually, Harry’s come for something beside the money he’s owed.  He’s given Jake a copy of his most recent manuscript, and he’s looking for feedback, as Jake has given in the past.  Jake, though, says he hasn’t read the manuscript, giving specious excuses that Harry, respectful as he’s always been of Jake, begins to suspect.  The play has the feel of a detective story — where the crime is psychological oppression — as Harry  pushes through toward understanding what’s behind Jake’s evasions.

Austin Pendleton conveys Jake’s evasiveness and passive-aggressive personality.  He’s a bit too old and wispy-fragile for the part, though, and comes across so eccentric and off-putting one wonders why Harry, although hungry for a mentor, was drawn to this one.  Sean Walsh on the other hand is too young for his part and too well dressed to fit the script:  he expresses effectively Harry’s growing awareness of the truths about Jake, but one doesn’t feel the grinding experience of early promise followed by an awful long wait for something else good to happen in his writing career, nor of loves won and lost.  His Harry is a generic lower class stud with a “Brooklyn accent” — method acting from the outside

In this play of vivid and contrasting characterizations and high personal stakes, every word counts:  the dialog is so pointed it heightens the sense of tension and suspense. Some lines are so revelatory they made me gasp. This is a welcome revival of a play that has drawn several fine actors in the past, including in an independent film with Jake played by Jerry Orbach and Harry by Al Pacino, who also did the part on Broadway.  Chinese Coffee is a small, tight, hold-your-breath classic.

I appreciate your interest! Yvonne

My sense is that the suspense is not only about how good is the novel but — related — will Harry disentangle himself from Jake? can he move from from innocence to maturity? Thanks for writing in.

I appreciate your analysis. However to me this play really did not resonate. I thought the two characters, although well played, were not real, and that there are all types of solutions that neither one avails himself of. It might be unfair to say – however I felt that this was almost 2 hours of two men with self-imposed restrictions whining and complaining about the restrictions. The greatest interest was, as you as stated, the suspense as to the real reason for the visit – to find out whether or not the new novel was any good or not. I… Read more »