Bauer focuses on a fascinating episode in the history of modern art in which the German artist Rudolf Bauer, in the midst of a successful career, stopped painting. Why? 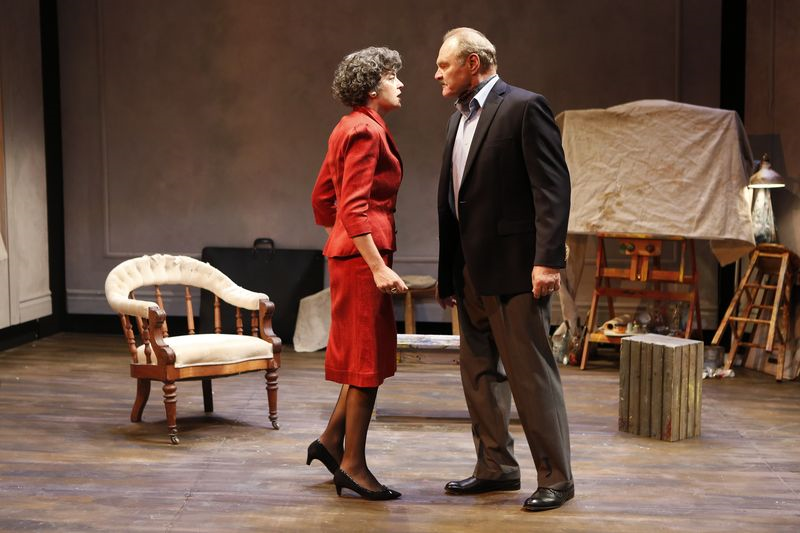 It’s about a contract. The story unfolds as Hilla von Rebay, Bauer’s former lover, arrives at the house in New Jersey where he’s living with his loving wife, Louise, and not painting.  Bauer had been an early and well-known non-objective artist in Germany.  Under Hitler, the work of this avant garde artist was included in the “Degenerate Art” exhibition, and he had been imprisoned for his art by the Nazis.  Solomon Guggenheim who, encouraged by Rebay, had been collecting his work for his planned Museum of Non-objective Painting, managed to have him released.

Finding refuge in the United States, Bauer signed a contract, brokered by Rebay, that ceded all his future work to the Guggenheim collection, for which he received a guaranteed stipend and use of a fine house in New Jersey.  Bauer claims he signed without understanding what the contract said.  Still, the arrangement may have made good sense at the time when Solomon Guggenheim was his protector, but after Solomon’s death his heirs had a different view of Bauer’s art and relegated his paintings to the “basement.”  None of his work was included in the opening exhibition of the Guggenheim Museum:  by then it was all about Kandinsky.  How galling that must have been, how unbearable. 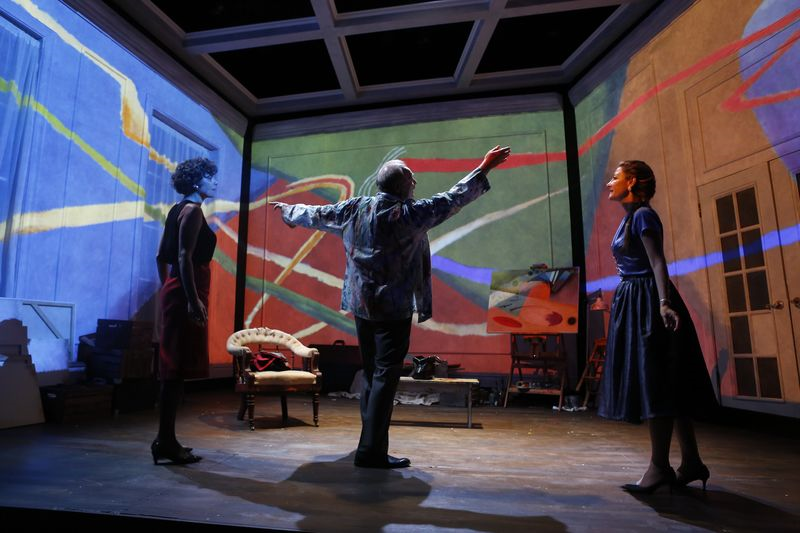 Gunderson’s play imagines an encounter of Bauer, Rebay and Louise twelve years after the contract and Bauer’s estrangement from Rebay.  She arrives at the house in New Jersey with the goal of getting him to start painting again, to make a try at breaking the Guggenheim contract, to fulfill his talent and — since under the new heirs she’d lost her job as head of the Guggenheim — to give her something important to do in the world of art.

The powerful emotional heart of the play is Bauer’s anger, frustration, bitterness and — less inevitably — his spiteful refusal to paint, the only way he sees to evade the trap in which the contract places him.  He has not painted for twelve years for one reason (at least as the play would have it): to deprive the Guggenheim of the works stipulated in the contract.  His passive-aggressive stance seems fully understandable, even heroic but Bauer is at the same time depriving himself of fulfilling his talent.

While he sees no way out of the trap, the sophisticated, fast-talking Rebay does.  Alternately alluring and goading, loving and angry, Rebay uses every arrow in her packed quiver to bring him back to his art and to her own purposes.  Will Louise, his warm, loving but unsophisticated wife, work with Rebay to get Bauer back into action or against her?  How will Louise understand her husband’s best interests?

The play has an unusual genesis: it was commissioned by SF Playhouse in association with The Weinstein Gallery that sells Bauer’s art, and it’s playing in New York in conjunction with an exhibition of Bauer’s work on exhibit at the German Consulate and soon at Sotheby’s.  By all indications, the play is part of a commercial push to heighten awareness of Bauer and raise his artistic prestige and sales-worthiness.   It’s important to be aware of the evident commercial purposes but these don’t mask the theatrical experience:  enabled by brisk directing and an excellent cast, the play provides an engaging and stimulating evening of theater.

I particularly enjoyed Stacy Ross as the smart, chic European, art deco Hilla von Rebay, slim in her stylish suit, knowing, witty, intense in her goals for Bauer and for herself.  Sherman Howard is effective as the artist furious at an ensnarement he’s obsessively certain he can only escape by sacrificing what matters most to him — his art.  Susi Damilano is a touching foil to the sophisticated Rebay, loving, tender and, we come to understand, plenty smart in her own way.

But while the play calls attention to Bauer, it doesn’t raise his artistic currency.  The unfinished painting on stage is duller than it needs to be, and, toward the end, a projected light show of Bauer-derived non-objective shapes (second photo) gives no idea of what his paintings look like.

As Bauer’s paintings were set aside by the Guggenheim, another, truly great, non-objective painter, Kandinsky, also collected by Solomon Guggenheim, became the star of the Guggenheim Museum.  I’ve thought of Bauer as a non-objective artist with a recognizable softness to his paintings, certainly without Kandinsky’s bite, power or persuasive cosmic vision.  Kandinsky over Bauer:  although the play, rooting for Bauer for its own reasons, evades that comparison, the Guggenheim heirs knew what they were doing.

But nonetheless Bauer had importance as an artist: he was an able painter who played a significant role in the development of non-objective art though, as the play reveals, he could not overcome his fall from being important to being dismissed.  In imagining the late life encounter of Rebay, Bauer and Louise, the play illuminates a not-well known chapter in the story of modern art and dramatizes with psychological truth a tragedy with meaning as old as Cain and Abel: being expelled, the fall from mattering to not mattering.

Thank you for this very insightful review and especially for “full disclosure”. Although, to me, this makes no difference, still it’s good to know. I thought the play was well acted and told it interesting and very human story. I’d recommend this both as a good theater experience and a history lesson.