… one of New York’s favorite theaters … 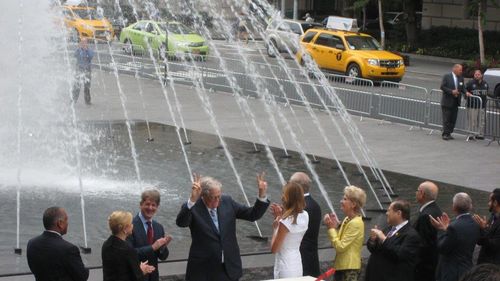 The moment the fountains of the new David H. Koch Plaza at the Metropolitan Museum were first (officially) turned on

The fountains that ran along the front of the Metropolitan Museum of Art, though they still looked beautiful and continued to toss their refreshing waters, had severe internal problems in the pipes and plumbing.  Museum Trustee David H. Koch expressed willingness to pay for repairs, an offer that morphed into a total re-design of the public spaces, four blocks long, that span the front of the museum, including removing the old fountains and installing new ones.  We were told at the ceremony dedicating the new plaza that Mr. Koch said “Why don’t I pay for everything including the extras?” and he did at a cost of $65 million.

He said at the ceremony he’s pleased that the two-year renovation project came in on time and on budget.   So how does it look? 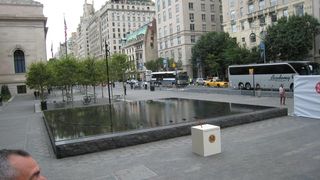 View from steps looking north before the fountains were turned on

The main features of the new design are two large fountains in square granite basins that flank the steps north and south.  Being square rather than long, and reaching closer to Fifth Avenue than the old fountains, these new ones bring the sparkling play of water and its delicious sounds closer those on the steps and to passers-by, more readily enjoyed. That’s really nice!  On either side of 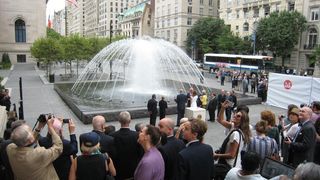 After the fountains were turned on

the fountains are newly planted shade trees — more than there were before — with café tables and chairs interspersed.  The Plaza is unified its entire length and depth by paving of grey toned granite. 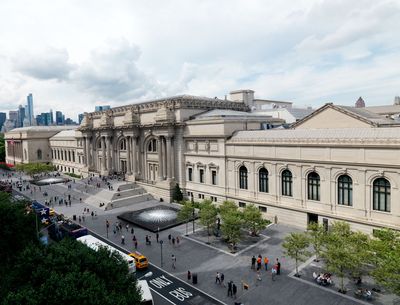 A consideration of old and new, though, makes it clear that there have been some significant losses.  The old fountains were long and narrow, stretching on either side of the steps a good part of the length of the museum’s façade, and thus they invited movement along the full length of public space, while the depth of the new square fountains obstructs the continuity of the spaces on either side of the steps.

Also, the high arching play of the water in the old fountains reflected and 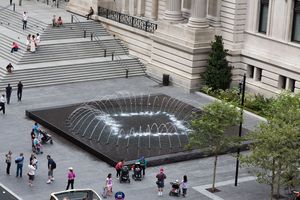 echoed the series of high arched openings of the museum’s facade behind them.  The square-within-a-square and circle-within-a-square geometry of the new fountains is a fascinating exploration of classicism, and links them with the steps in an interesting way, while engaging less with the architecture of the building.

And — depending how you feel about park-like settings — before the renovation, shade trees and park benches set on cobblestones created a continuation of Central Park that lies behind the museum.  The new plaza is sheathed in gray-toned granite, with café tables and chairs instead of park benches and pebbly cobbles, weakening the sense of the continuity with Central Park.  Before the park embraced the museum, now it sits behind it.

All in all, the new design is more centralized than the earlier one, with the casual seating areas — café tables and chairs — somewhat marginalized by those deep fountains.

During the dedication ceremony for the new plaza, Thomas Campbell, the 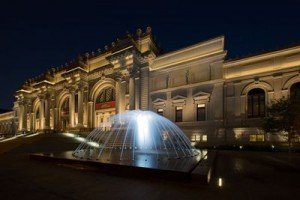 Museum’s Director and CEO said some wonderful words about what he called “one of New York’s favorite theaters — the steps of the Met.”   The steps draw an exhilarating mix of museum goers and people and performance watchers from all over the city and all over the world, sunning, eating, singing, enjoying music, mime, break dancing, juggling — virtuoso performances of all kinds … well, if you don’t know, make a visit!

And as for the plaza, it will take a little doing but — like a river — people will find their way, filtering through the full length of the four city blocks, and make this public space their own. 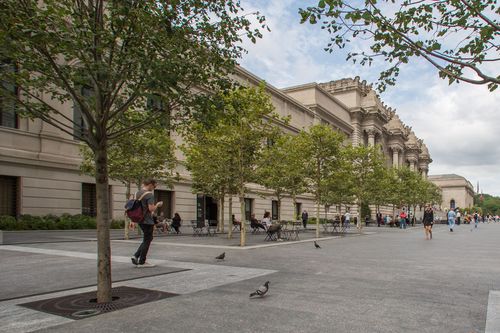 View of plaza looking North from 81st Street. Photos 4-7 courtesy of the Metropolitan Museum of Art

Agreed … that’s a lot of millions going to granite! Thanks for writing.

The old Plaza certainly needed refurbishing as the fountains were not working too well, there were loose stones, and really a very uneven surface. We now have this new and interesting Plaza, and as you say there are differences in the way in which this will be appreciated. This citizen cannot help but wonder whether the spending of $65 million on the structure will be of more value than the use of some of that money to sponsor human beings in the creation and preservation of art.