Gidion’s Knot is an intense gem.  Two persons, a mother, Caryn (Leiner) and a grade school teacher, Heather (O’Brien) are engaged, during a parent-teacher conference in a taut  offensive-defensive search for truth. 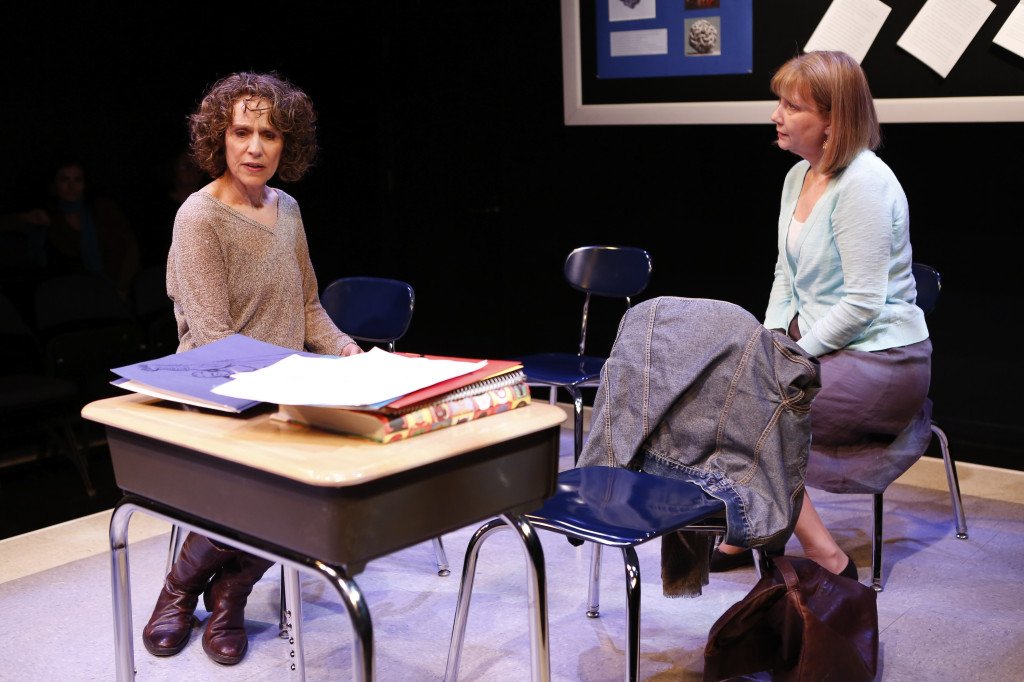 Caryn, thin, brusque, sharp, in jeans and leather boots, comes to school looking for an explanation for a catastrophe that has met her son. Heather, soft, tender, plump, blowzy, seeks to keep Caryn — and her probing questions and snooping around the classroom — at bay.  Caryn is looking to untie the knot of evasions and slim clues that stand between her and knowing the truth of what transpired regarding her son.   Heather, the classroom teacher, knows the truth — or does she?

Like Hickey in Eugene O’Neill’s The Iceman Cometh, and with a similar cruel edge, Caryn strips away the self-protective rationalizations, forcing truth into the open for both women.  Directly on the heels of Caryn’s relentless and successful hunt for truth, the question looms:  given the great value placed on truth, is there ever a role for compassion in the searching it out?  Gidion’s Knot seems to come down on the side of the unvarnished value of searing truth, a tough verdict.

Two outstanding actresses, Karen Leiner and Dara O’Brien, in their two studies of opposites, fascinate in the course of their emotional voyage, as if they shared a lifetime, and under Austin Pendleton’s subtle direction, nothing is lost and everything illuminates.

Johnna Adams’ deep knowledge of human beings, intelligence and dramatic gift has located in a meeting of a parent and teacher in an ordinary classroom an encounter as hold-your-breath suspenseful as a whodunit, and with the highest stakes.  It leaves you thinking about topical issues, such a school bullying, and eternal questions, such as the nature and value of truth. This is true dramatic magic.

After reading your review, one really would like to see this very interesting production. Hopefully I can make it before it closes.