For clarity’s sake: Sarah Flood in Salem Mass isn’t about witch trials (unless I missed the word, “witch” never comes up).

It does take place in 17th-century Salem, Mass. though it includes two female visitors from the future — one of whom directly engages with the Salemites while the other just hovers in, watching the action.

There are several narrative lines and places to look.  A group of girls meets in the woods for prayer and fellowship.

Some girls develop spastic seizures that worry their parents. 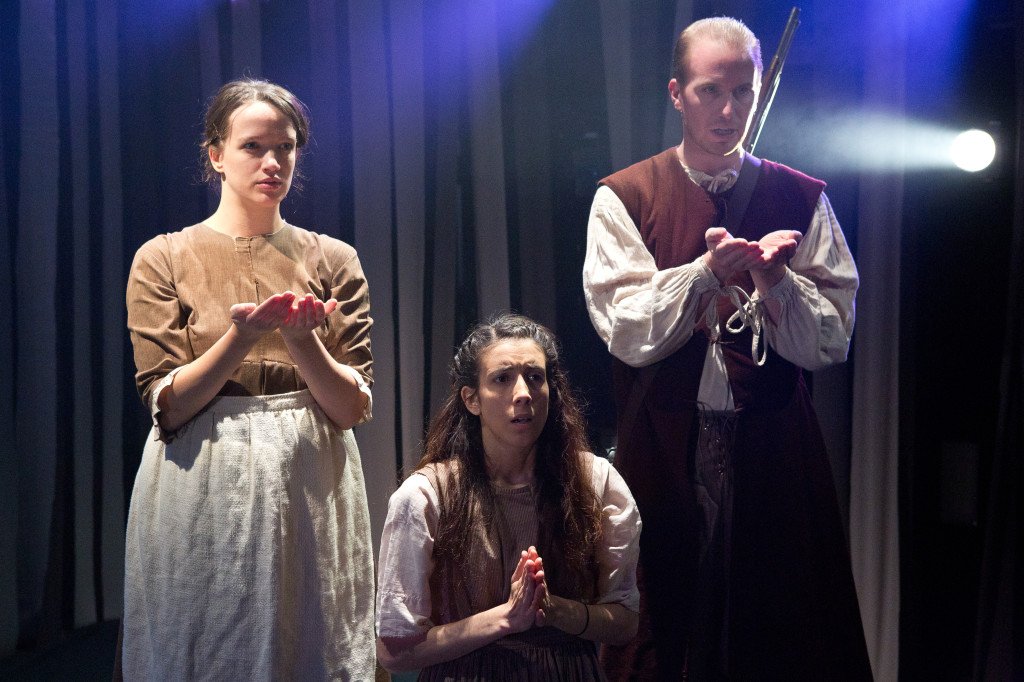 In a family rivalry, Thomas Putnam, an impoverished leader of the community wants the land being inherited by Haley Joel Putnam to be used for the benefit of the town while Haley Joel wants to keep it for himself.

Liz, who wants to protect beavers from deforestation and other threats, resorts to a marriage of convenience and murder in the service of her ideals.

The local tavern owner who’s lax about going to church is persecuted (this came up early in the play when I was still expecting someone to call her a “witch” but no one does).

The kaleidoscopic presentation and cacophony make it tricky to take in the dialog which is, however, very flat.  For example, chosen at random, one character says, “Everyone hates you.”  The other one says, “Not my mother.”  There’s a lot like that.

The mini-stories reflect aspects of the actual history of the Salem trials, e.g., some historians believe that a family rivalry may have been behind the first “witch” accusations.  Spastic seizures were thought, in Salem, to be signs of the activity of witches.  Juyoug, the visitor from the future who engages with those in town reminds one that Tituba, one of the first accused in Salem, was an outsider ethnically (her specific background remains uncertain).

By the play’s end, a few conclusions are reached such as: whatever happens to people while they’re alive, everybody dies eventually and that’s that.  We have also seen through the action that sometimes the wicked flourish.  Unfortunately we don’t need this play for those insights.  Generally, the play seems forced, looking for original effects. 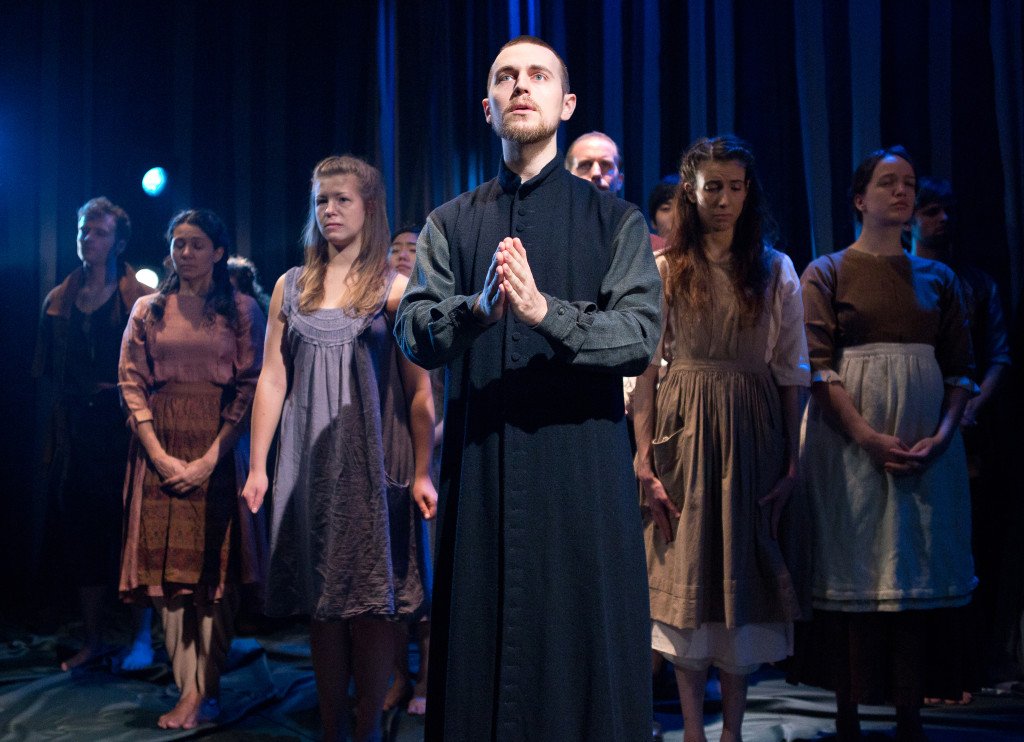 Though the material is thin, the Bats, the Flea’s resident company of actors early in their careers, are wonderful.

Sarah Flood In Salem Mass plays at The Flea Theater in NYC’s Tribeca through October 26th, 2013.

That last is thought provoking — you want everything to have a chance and to be as open as possible — but “yes” here is “no” there — how to allocate resources in the most creative way?

I agree this play had great expectations BUT really was a disappointment. I’ve tried to think what its real message was – as best I can come up with it was delivered in that part of the ending where everyone dies, no matter whether good, bad, or indifferent. The talent of the acting company was excellent, the settings superb. However the play itself cannot really justify the effort that was put into the scenic design, the choreography, and the wonderful performers.